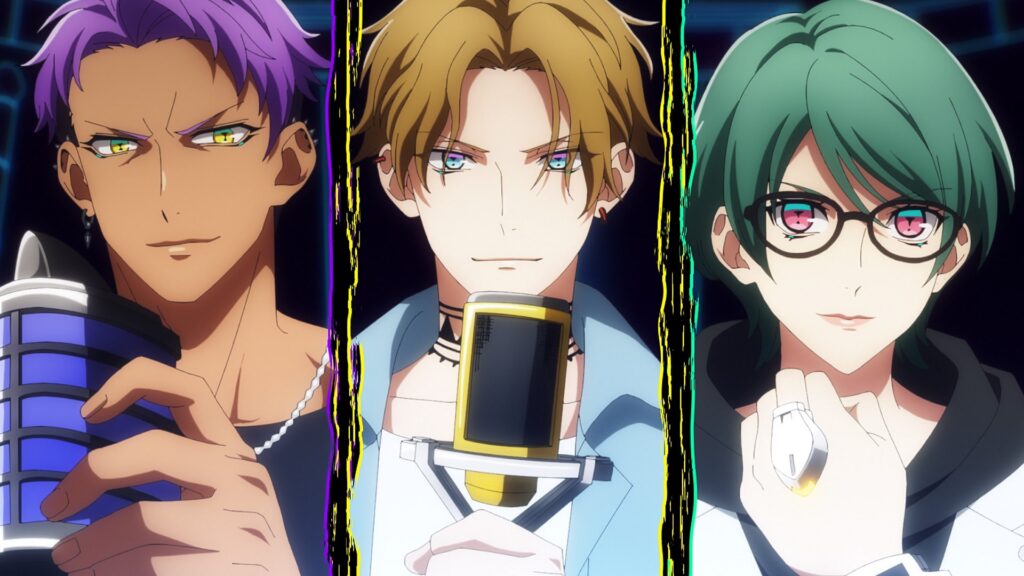 Hypnosis Mic -Division Rap Battle- has not pulled any punches when it comes to the music featured across the entire franchise. Despite its pretty boy exterior, the series has made sure to maintain an extremely authentic feel across all of its soundtracks by employing iconic Japanese hip-hop acts like SCHA DARA PARR, ZEEBRA, KEN THE 390, and more to create its sound. Even with an already stacked lineup of artists, KING RECORDS keeps pulling out all the stops with the announcement of yet another iconic Japanese hip-hop group joining the fray.

Earlier today it was announced that legendary hip-hop/dance music trio m-flo has produced a new original song to the series for the in-universe group, Secret Aliens. The track, titled ‘Love Dimension’, sounds unmistakeably theirs with the female vocals coming in at the beginning channeling LISA’s enchanting melodies, an effervescent flow that mixes English with Japanese straight from VERBAL’s playbook, and a dancefloor worthy backing track courtesy of ☆Taku Takahashi (with an arrangement assist from his longtime engineer Mitsunori Ikeda). Don’t take my word for it though, check out the track yourself:

As I briefly touched on in our recently published article on the history of Japanese hip-hop, Hypnosis Mic is doing wonders to expose an entirely new audience to Japanese hip-hop, covering both old and new-school varieties. It’s a franchise that’s easy to dismiss at first glance if you just look at the surface, but peel back the curtain a bit and not only do you have an interesting core concept to the story, but one of the best soundtracks to come out of a multimedia project of this type in quite some time. Even outside of the hip-hop elements, acts like TeddyLoid and Reol (among others) add an air of diversity to the music lineup, while still representing the core ideas of the series.

As if the trio contributing their talent to Hypnosis Mic wasn’t enough, m-flo also added a new playlist to Spotify today that features a lineup of the songs they’ve done for anime & games over the years. Everything from their early beatmania IIDX features (‘been so long’, ‘flo-jack’, ‘L.O.T.’), their contribution to the Amazing Nuts anime project (‘she loves the CREAM’), the remix of the opening from the 2003 Astro Boy anime (‘Astrosexy’), their ending to Black Clover (‘against all gods’), and even the original version of their collaboration with Shadow The Hedgehog (‘Tripod Baby’). It’s an excellent selection of tracks that also happens to span from their very beginnings all the way to their most recent activity.