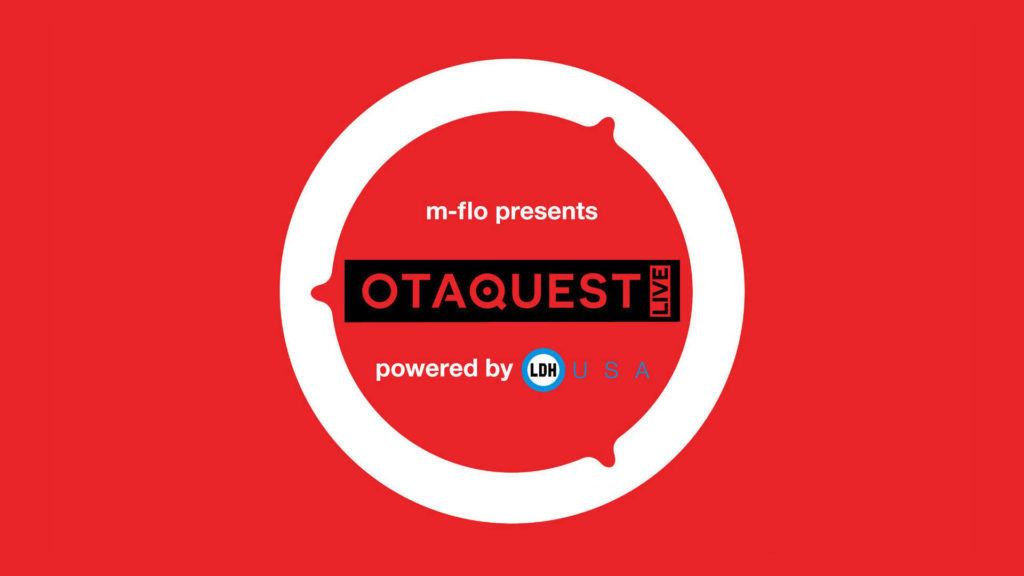 We’re just a matter of weeks away from Anime Expo 2018, and with that, we’re beyond excited to bring a new wave of news and announcements for the much-hyped m-flo presents: “OTAQUEST LIVE” powered by LDH USA event. Taking place on July 5 at the Microsoft Theater, we’re working to bring the biggest names from Japan to the United States for a larger-than-life event. Following last week’s second wave reveal, we’re finally ready to reveal the third wave of talent — including legendary producers Yasutaka Nakata, TeddyLoid, and Hachioji P.

Set to take over the Microsoft Theater in Los Angeles, California, m-flo presents: “OTAQUEST LIVE” powered by LDH USA is on a mission to connect international fans of Japanese music and culture to some of the biggest names in Japan’s ever-changing music landscape. So with all that being said, let’s take a look at the incredible lineup additions that we’ve called on to help paint the skies on July 5th below: Beginning his eclectic career as a sound creator in 2001 as a member of musical duo CAPSULE, Yasutaka Nakata has been a long-standing figurehead in the Japanese electronic music landscape. With an immeasurable sound palette that ranges from authentic dance music to “kawaii” sounds, Nakata defines himself with his original chops and stylings.

One of very few people who can lay claim to being the inspiration behind powerhouse producers such as Madeon, Porter Robinson, SOPHIE (PC Music), and more; Yasutaka Nakata’s career has impacted millions around the globe. Following official remixes for artists such as ZEDD, as well as the production of Ultra Music Festival’s official anthem, “Love Don’t Lie (feat. ROSII),” Nakata is constantly finding new and exciting ways to cement his name on a global scale.

With a massively successful career that includes the release of his debut solo album, “Digital Native,” — featuring fan-favorite tracks such as “Crazy Crazy (feat. Charli XCX & Kyary Pamyu Pamyu)”, there’s no telling what’s going to come next from Nakata. Outside of all that, you’ll often find Nakata producing some of the biggest talents in Japan including Perfume, Kyary Pamyu Pamyu, as well as a number of other incredible talents. His irreplaceable production skills have long allowed talent to truly flourish both in Japan and internationally.

Through his bridging of Tokyo’s club culture with the worlds of game, fashion, and film, Yasutaka Nakata remains both a global driving force and pioneer of Japan’s defining electronic sound. TeddyLoid started his career as MIYAVI’s DJ and Sound Producer by joining his world tour when he was only 18 years old. He also produced the OST for GAINAX’s anime “Panty & Stocking with Garterbelt” with Taku Takahashi(m-flo). He has also had experience in units with Shibasaki Ko and DECO*27, he established galaxias!, he has also sound produced for Momoiro Clover Z “Neo STARGATE” and had a guest appearance in 2013 Seibu Dome Taikai. Furthermore, he has provided BGM to the anime “Mekakucity Actors”. TeddyLoid has also produced vocaloid IA tracks and remixes, handled Hibiki Yoshizaki’s “ME!ME!ME!” in “Anime(tor) Mihonichi”, Square Enix’s “Mugen∞Knights”, and WRECKING CREW ORCHESTRA’s, directed by Amon Miyamoto, new long production “SUPERLOSERZ SAVE THE EARTH”.

TeddyLoid debuted as a solo artist by releasing his EP from King Records’ EVIL LINE RECORDS in August 2014, “UNDER THE BLACK MOON” and the first album “BLACK MOON RISING” in September. In 2015 summer, he started “Momoiro Clover Z×TeddyLoid Remix Project” and released the first official remix album, “Re:MOMOIRO CLOVER Z” . In Momoiro Clover Z’s big summer event “Momoshinsai 2015”, he performed the opening act as DJ. In December, he released the first collaboration product with total 12 songs and 14 sets of guests, and also released “SILENT PLANET” as the original 2nd album.

TeddyLoid has been breaking news for collaborating big artists such as Tetsuya Komuro, Yasutaka Nakata, Ko Shibasaki, and KOHH, etc. From April, he is in charge of the music for the 2016 TVCM “Kirai, demo, suki” for Mode Gakuen group school, HAL. Hachioji P is the king of Vocaloid music with content views of over 10 Million across video streaming platforms. His debut album “electric love” debut at #11 on the Oricon Charts, and saw strong performance in Taiwan at #8 overall. Hachioji P also performs regularly as a DJ appearing in the “ROCK IN JAPAN FES”. Following the release of his Vocaloid Best Compilation Album “Eight -THE BEST OF 八王子P-”  he participated in HATSUNE MIKU’s North American tour with stops in New York & Chicago and in 2017, supported her across a 3 city Asian tour. Hachioji P has proven his International appeal.

Hosted in conjunction with the team at Anime Expo, we’re beyond excited to bring this event to life on July 5th. Further details regarding the event can be found below:

With event tickets available on sale now, you won’t want to miss what’s prepping to be one of the most exciting nights in North American convention history. For further details, as well as ticket purchasing, be sure to check out Anime Expo’s official website.