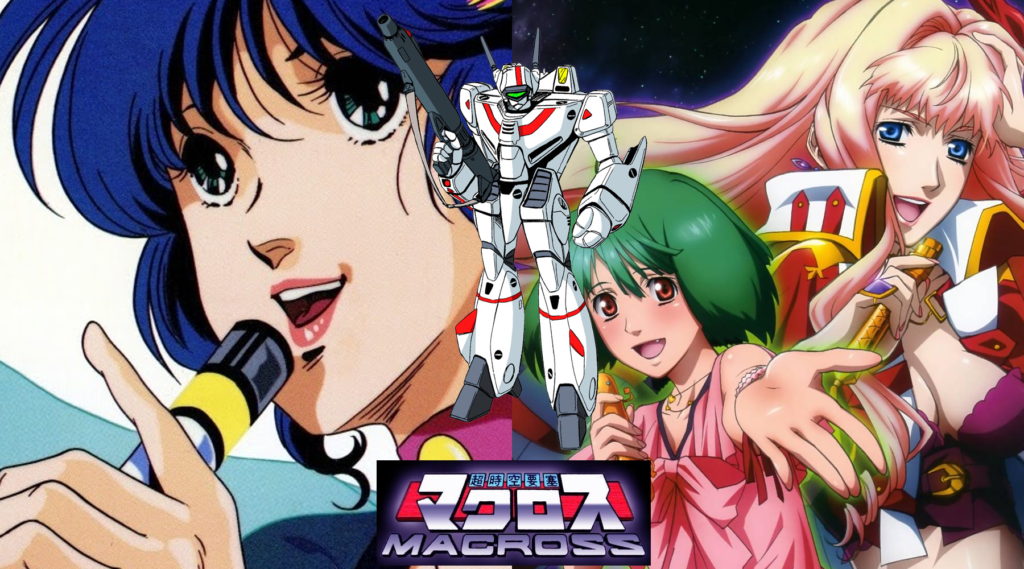 Well before Love Live! and THE [email protected] would have fans collecting cartoon idols in their pockets, before Neon Genesis Evangelion would all-but-permanently ‘deconstruct’ mecha anime, and even before The Legend of The Galactic Heroes’ space opera antics, we had Super Dimension Fortress Macross… and folks, Macross is back!

The Macross series, with its signature blend of sci-fi, romance, and space-idols, has continued to endure with its many iterations from the early 80s to this very day. Certain complications with a certain Frankenanime called Robotech may have prevented one of the most influential and beloved mecha anime, only second to Mobile Suit Gundam, from rising to its full potential, but that’s all changed now.

And to help usher in this new international era for Macross, we’ve whipped up a guide to the franchise just for you.

Where Did the Macross Series Come From and Why Is It Important?

Super Dimension Fortress Macross, the first series in the franchise, was originally going to be called ‘Battle City Megaload‘ but Big West, one of the show’s sponsors, wanted the robot to be call ‘Macbeath‘ and ‘Macross‘ was the compromise.

It was originally fronted by a company called Wiz, who were working with the animators at Studio Nue and future-legend Shoji Kawamori, to create something inspired by Gundam. Wiz went out of business, Big West came in to pick up the pieces, and the Macross series was properly born.

When it premiered in late 1982, fan reception was so overwhelmingly positive that Big West extended the production to an odd 36 episodes. It allowed Macross to explore all sorts of uncharted anime territory, with fans particularly responding well to how it portrayed war from the civilian’s perspective and to a nuanced approach to romance for the time.

If the show wasn’t something special, no way they’d keep making quality iterations over the next 40 years, but some of that success is owed to how it expanded internationally.

Breaking Down the Many Macross Series

The Macross series started with Super Dimension Fortress Macross one fateful October 1982 and it never looked back… until it realized allowing itself to get westernized into Robotech eventually bit it in the ass. While certainly taking some influence from the Mobile Suit Gundam school of mixing robots with serious story-telling, the show’s hard space-age edge coktailed with a cute girl who sings was a revolution all its own.

Who knew that mixing aerial dog-fighting, mecha bashing, and love would be a recipe for four decades of success?

Okay this one’s a movie, and a retelling of the original show at that. HOWEVER, many of the lifelong Macross fans out there consider Macross: Do You Remember Love one of the most important works of the franchise, leading it to having a reputation all its own. It is filled to the brim with that sweet and aesthetically pleasing 80s animation style, rendered at a movie budget that simultaneously depicts a wild space war while blasting Lin Minmay’s charm to 11.

That spectacle alone makes this a must watch.

Super Dimension Fortress Macross II: Lovers Again saw no involvement from Shoji Kawamori nor the original team at Studio Nue, so you really could call it ‘Macross GT‘. Despite being very highly anticipated upon release, with no new proper Macross series or film in eight years, those then eager fans were not too thrilled with the final product.

The OVA featured a new group of aliens, new supporting singers, and a different type of protagonists. It also has some good mechanical design.

As we’ve told you before (and we’ll tell you again), Macross Plus remains an absolute trip and with it only being four episodes, you have no reason not to watch it. The first collaboration between Cowboy Bebop director Shinichiro Watanabe and Cowboy Bebop composer Yoko Kanno, anime’s GOATED duo, this first ‘actual sequel’ to Super Dimension Fortress Macross sees the series at its most artistically ambitious and, god, we’re so happy we’ll be able to buy this one in Blu-Ray soon.

1994 was a good year for Macross fans: they had two mainline Macross series to play with. If the experimental tendencies of Macross Plus aren’t your thing, maybe the fun space-hijinks of Macross 7 and its handful of small sequels will be. The ‘fictional’ band from this show still plays live concerts, more than two decades later.

The only prequel Macross series, the Macross Zero OVA series could probably be called the most under-rated Macross show, hitting on some of that Plus weirdness while telling its own story. It depicts the final battles of Earth’s Unification War, before the huge alien ship was transported to the far reaches of the solar system.

Nobody thought Macross Frontier would be a failure, but even its creators didn’t quite anticipate how much of a runaway success it would become. Essentially, it translated the original Macross formula to more modern sensibilities, brought along the popularity chart-topping Ranka and Sheryl, and created a whole new generation of Macross fans particularly loyal to this new iteration. Out of all the shows to not become legally available in the west, it’s possibly been the most sought after, certainly within the context of Macross series.

Also, since it was released for the franchise’s 25th anniversary, Frontier includes tons of references to all the previous entries. Better enjoyed if you can get these references..

That entire new generation of specifically Macross Frontier fans were hungry for more, so you can’t exactly blame Shoji Kawamori and Studio Nue for trying to recapture what made Frontier such a delight. Unfortunately, bumping up the number of girls from two to five and really leaning into the modern conceptions of idols, all while incorporating ‘magical elements’ didn’t exactly hit the mark for many.

Robotech and Macross Are Not the Same Thing

Robotech. For some old old heads, this word brings back fond childhood memories of eating sugary cereals in front of a Cathode Ray Television set. For others, it inspires a deep-seated, still festering anger, despite no longer being necessary. See, the original Super Dimension Fortress Macross was cut up and spliced with other shows into something called Robotech for American television in the mid-1980s. The legal battles between Harmony Gold, owner of the Robotech copyright, and Big West, owner of the Macross series trademarks, ensued for years and prevented all the great Macross series from coming out in the United States and the rest of the world for decades, making even the worst of 4kids’ ‘editing’ a joke. Still, Robotech was how so many of us were introduced in those early pre-internet times to not only Macross but anime in general, and nostalgia being the most powerful intoxicant of all means this Americanization still has many fans.