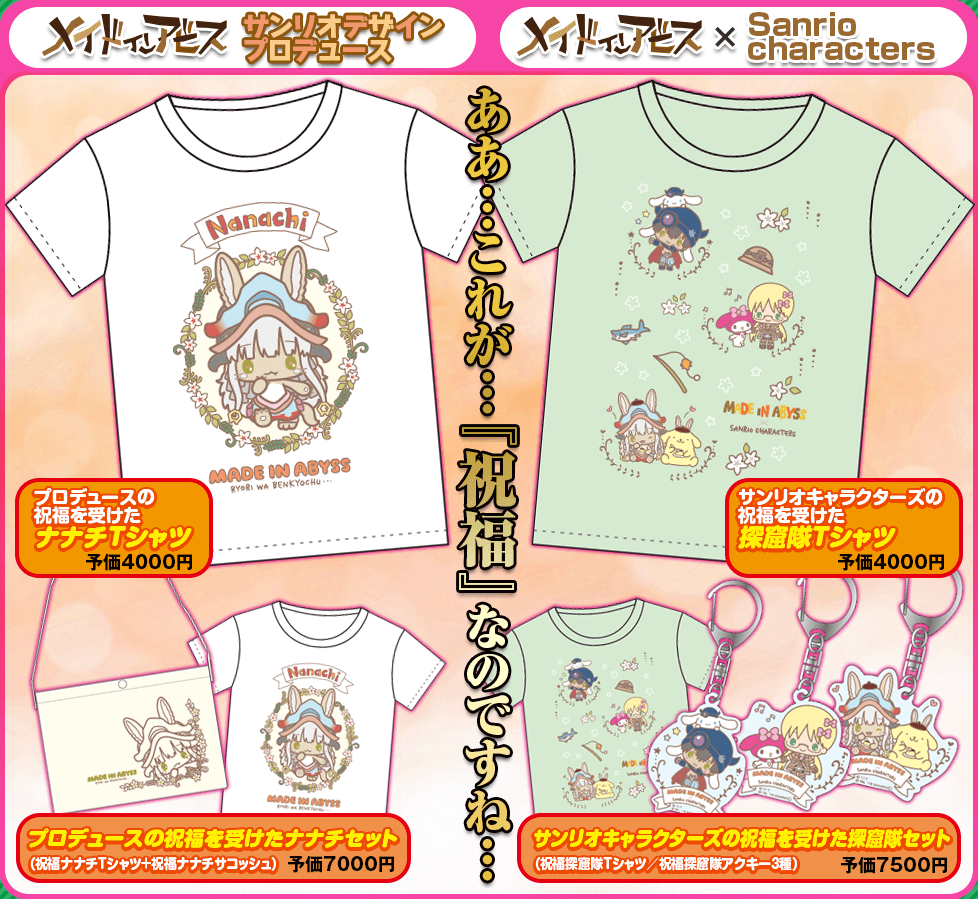 Sanrio may be no stranger to teaming up with anime to produce unique goods, but their latest collaboration with Made in Abyss for Comiket 96 is more than a little inappropriate – but perhaps that’s just part of the fun.

As part of publisher Takeshobo’s offerings at this year’s Summer Comiket 96, Sanrio has produced a series of Made in Abyss goods in their iconic cute art style, including shirts, bags, and keychains.

Such goods can only be described as ‘cute,’ yet they don’t half contrast with the latest trailer for the Made in Abyss: Dawn of the Deep Soul sequel movie that dropped at Anime Expo over the weekend.

The above trailer sets up the twisted relationship between antagonist Bondrewd and his ‘daughter’ Prushka, which will be the first glimpse of such for those who haven’t read the manga or seen the second compilation movie, which features an additional scene with Prushka.

Kinema Citrus also lay bare the dark atmosphere of the twisted story to come with the gorgeous sketchy cuts of Bondrewd that set the antagonist in a nightmarish dreamscape of black and red alongside a harrowing choral score, provided the Australian composer Kevin Penkin.

All of this couldn’t be more different from the cute stylings of the Sanrio and Made in Abyss collaboration goods, and it makes them seem a little inappropriate given the timing. But then again, I’m sure that fans won’t take it too seriously. After all, it’s just a bit of fun – and fans themselves aren’t averse to some tongue-in-cheek humor every now and again.

Hopefully, then, fans will also be able to see the humor in another one of Takeshobo’s plans for Comiket 96 that was revealed alongside the Sanrio Made in Abyss goods.

Available at Takeshobo’s booth this year will be a recreation of the elevator that Nanachi and Mitty rode on to contract the Curse of the Abyss, which fans can also ride on in real life alongside Nanachi in place of Mitty.

Now, I don’t know about you, but that definitely doesn’t sound like something I’d like to do – it’d bring back too many traumatic memories of the scene in the anime and original manga. But hey, to each their own, right?

You can check out more information regarding Takeshobo’s Comiket 96 plans via their official website, including full details on the Sanrio Made in Abyss goods.