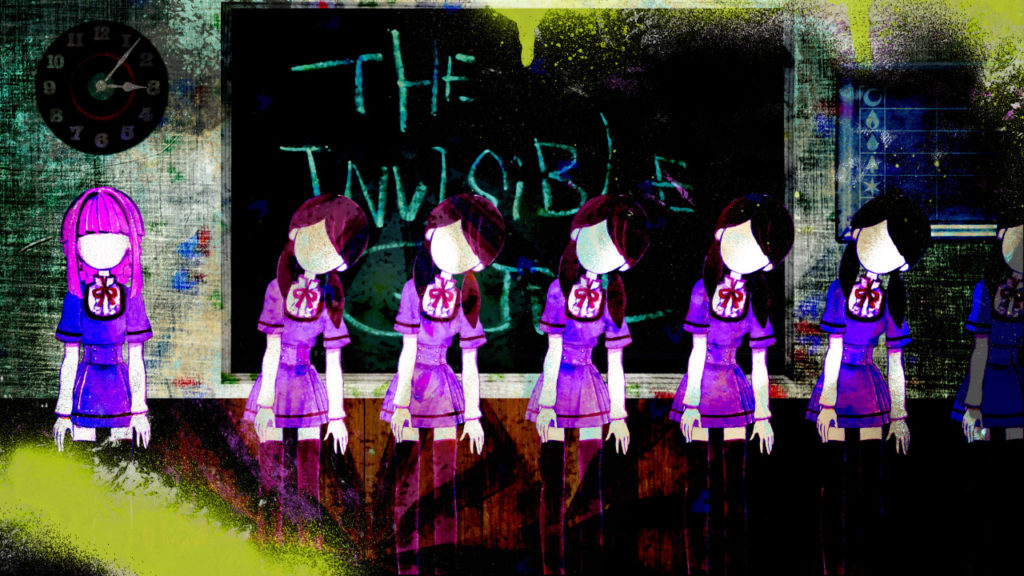 Interview with Doroinu of Gekidan Inu Curry, the Designers Behind Madoka Magica’s Witches

Puella Magi Madoka Magica and Magia Record: Puella Magi Madoka Magica Side Story. These altered realities we find ourselves lost in. The unique blend of cute and grotesque seen in their visuals, and the story conveyed through these means, is the work of none other than the two-man group gekidan INU CURRY. Today we sat down with Doroinu of gekidan INU CURRY so he can tell us a bit about how he came to know Akiyuki Shinbo and some of his creative roots.

OTAQUEST: Around when and how did you come up with the “collages” that are near synonymous with the gekidan INU CURRY name?

Doroinu: While I was influenced by Russian and Czech art animation, it stems from originally wanting to move a paper-drawn character on a background, like a puppet show. The end result is what the collages are. I like the texture of things, so it might be more correct to say that in trying to convey the texture of things I ended up with the collages.

OTAQUEST: Can you tell us how you came to be in charge of the background design for these altered dimensions in Madoka Magica?

Doroinu: Akiyuki Shinbo actually came to us. Previously we had done some work for him on Sayonara, Zetsubou-Sensei and Maria Holic, but this was the first time we were involved in something from episode 1 thru episode 12. At first, I was only supposed to be in charge of the designs for the witches, but I also ended up in charge of the materials and the visuals. At the time I had no idea it would be something that would go on for so long. 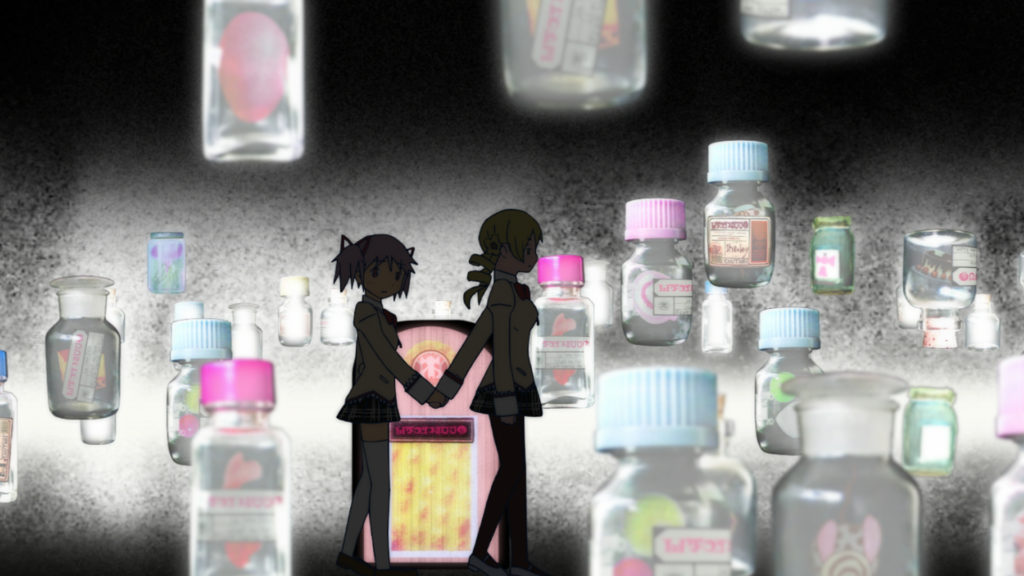 OTAQUEST: What is the biggest thing you learned while working on Madoka Magica?

Doroinu: the production pace for a TV series. Up until then, we had only worked on projects that took the two of us to finish, but now we needed to put things other people had made into our own work, or finish putting together something that someone else was working on. For those reasons, I think the biggest thing was that we had to carefully consider the circumstances of the whole schedule in detail to some extent, and set definite dates. Considering how to make things happen within a limited schedule was incredibly important for both Madoka Magica and Magia Record.

OTAQUEST: In regards to the excitement that surrounded the 2011 broadcast of Madoka Magica; looking back, what aspects of Madoka do you feel impacted the world?

Doroinu: I believe it was Urobuchi Gen’s story and how the story was told, and the masterful balance between the two. The story itself is quite abrasive, so director Shinbou took extra care not to make the cruelty depicted on the screen too excessive.

OTAQUEST: After the success of Madoka Magica, you were also put in charge of the designs for the witches, Uwasa, and minions for the Magia Record mobile game. Were there any deliberate changes to the way you designed characters for each series?

Doroinu: the design team at f4samurai would send me drafts, and we would supervise and add details or corrections. Magia Record is a game first and foremost, so the characters had to be easy to understand. If it was limited to just visual storytelling then I think the characters would be more abstract, but in-game how things move and look are limited, so I wanted to make characters that had easy to understand motifs.
Regarding the space that the witches and Uwasa occupy, there were a lot of people that worked on it. J.A Caesar helped out with the bulk of the witch space design by sending in the drafts, and the people over at Shaft helped with the texture production and witch movement. We had a lot of elements from other places also take part. 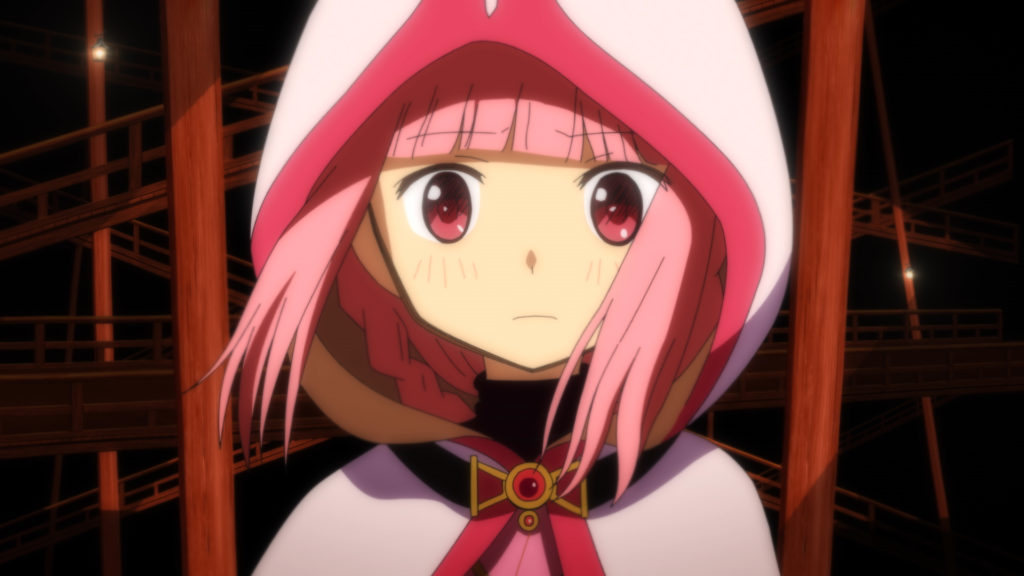 OTAQUEST: From your position, what would you consider to be the biggest difference between Madoka Magica and Magia Record?

Doroinu: I think the direction the game is aiming for is the biggest difference. At its core, Magia Record is a story about Iroha and her search for her little sister, but there are also stories about each of the magical girls who end up at Mikazuki Villa. Therefore, it is a story that unravels over a slightly longer period of time, rather than a story that is told clearly in a short period of time.

OTAQUEST: You were put in charge of series direction and made the director for the anime version of Magia Record. You even wrote an event scenario for the game. What did you feel, being put in such an important role?

Doroinu: Although I had participated in the scenario composition meetings from the beginning, it wasn’t originally planned that way. Eventually, I was involved in the game from release, so I accepted it as a sort of bridge from games to animation. Even at the time, I knew it was a hard role and the pressure would be massive. The reason why Mr. Shinbou isn’t the director to expressly clarify that Magia Record is a side story and not a continuation of Madoka Magica.

OTAQUEST: From people who had prior knowledge of Madoka, to people who played Magia Record, to people who knew nothing about the franchise; during the production of the anime I imagine you expected many types of viewers. What parts did you place priority on [during production]?

Doroinu: Since the anime is based on the game, we mainly expected the players to watch. Even during the drafting phase, it was decided to follow the story of the game. So I thought that it would be good if we could make it feel kind of urban legend-y in regards to exploring the uwasa, while focusing on making it Madoka Magica-y for the visuals. 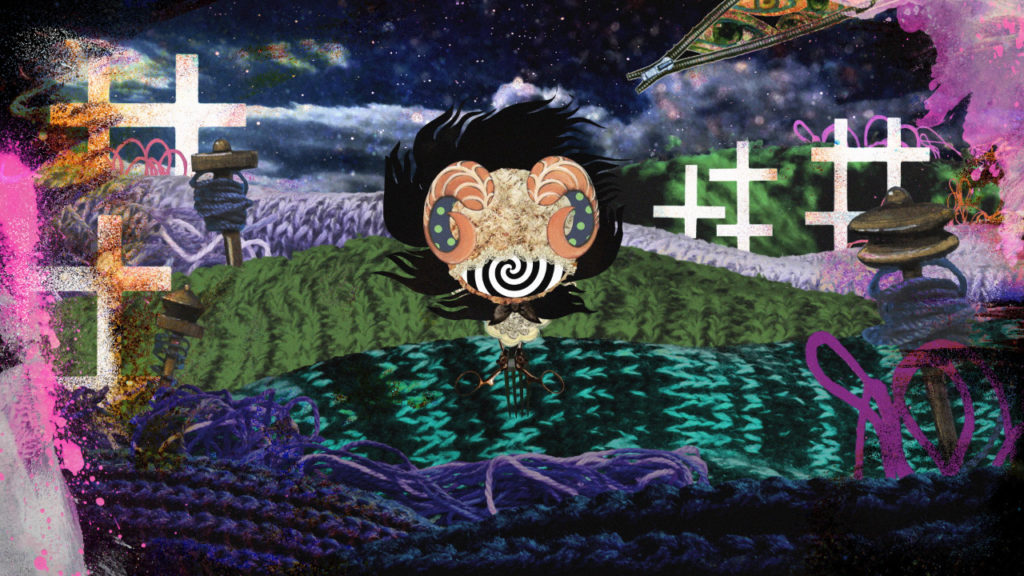 OTAQUEST: Both Madoka Magica and Magia Record have strong followings overseas, with many fans saying they love this particular art style. Do you really feel that response?

Doroinu: The biggest difference between creators who work in a way like ours and creators who regularly present their works at events like solo exhibitions and the like is that it;’s hard to feel the same response as directly and as concretely. I also do personal projects, but the majority of my work is in anime production. Just because someone is a fan of a particular work, that doesn’t necessarily mean they are a fan of gekidan INU CURRY. I’m convinced there’s nothing but negativity so I’ve made the choice not to read or reply to any tweets.

OTAQUEST: In an interview article eight years ago, you said, “About 3 or 4 out of 10 people can understand my world.” Is that still the case? Has anything changed in your stance creatively since Madoka Magica?

Doroinu: The number might have gone down to two or three people now! (laughs) I think if you seriously pursue your hobbies, that much is to be expected. Having worked within the tight production timeline of Madoka Magica I feel more confident in my abilities to actually produce work, but the feelings of “If I have the time, I want to try anything that’s asked of me” hasn’t changed. The production speed is actually quite slow, so oftentimes schedules don’t line up. The other big difference is that although we make more works for a niche market, we’re still able to get by with this work. When i was working on Madoka Magica I was working at the Shaft offices every day and had to quit my part-time job at a manga cafe. Thanks to that I was able to work in the industry and make things aimed towards niche audiences. I often interact with other writers at galleries and events. During these events the issues of predisposition to social withdrawal and a lack of positivity are highlighted to me, so I think it’s thanks to Madoka Magica that I’m able to continue on as a freelance writer as well.

OTAQUEST: Is there anything you want to do once the production of Magia Record is over?

Doroinu: I want to make things for a small number of people.

The creativity shown by gekidan INU CURRY, the ability to show a world never seen before, was given shape with Madoka Magica and fleshed out in Magia Record. And it’s thanks to them capitalizing on the realization that they aren’t the same as others that we’re able to have new and exciting experiences. I can’t help but expect that they will bring unknown surprises in the future.