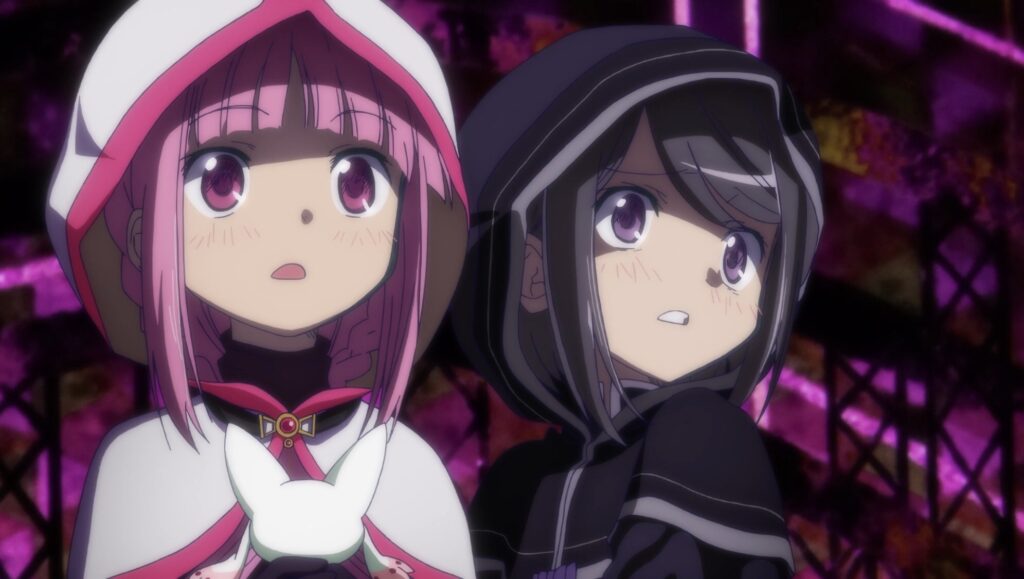 ‘A wolf in sheep’s clothing’ is an idiom that came from the Bible, but it’s meaning is not meant only for Christians… everyone in the world can understand the same concept. Nothing describes the series Puella Magi Madoka Magica better than this idiom. This element of ‘not what it seems’ played an important role in this production, becoming acclaimed by anime fans not only in Japan but all over the world.

Puella Magi Madoka Magica is a TV anime that originally aired in Japan in 2011. After that, two recap movies titled Beginnings and Eternal were released in 2012, and a third movie Rebellion was released in 2013 as a new entry in the series. In 2017, the side story Magia Record was released as a mobile game, and now it started airing as the TV anime series Magia Record: Puella Magi Madoka Magica Side Story from January 2020.

If you have been reading OTAQUEST, you already know that the series has been increasing in fans worldwide as new episodes were released each week. Why are we attracted to this story? To find out, I would like to sort out what the ‘sheep’ and what the ‘wolf’ are in the Madoka Magica series.

What draws our attention in the Madoka Magica series is the cute magical girls. They were designed by Ume Aoki throughout the series, and all the characters have her unique ’round face and drooping eyes’. In Japan, there is a prominent genre called ‘mahou shoujo (magical girl)’ which includes series like Sailor Moon, and it has been fulfilling girls’ desire to transform for decades (The origin of the ‘magical girl’ genre is said to be Fujio Akatsuka’s ‘Himitsu no Akko-chan’ from 1962).

The magical girls in Madoka Magica are also designed in an authentic way that looks like they are going to fight against a dark secret organization (whose leader is a good-looking masked man). Ume Aoki has said in a past interview that she designed them in an authentic way intentionally. We can sense the concept of stuffing the essence of the ‘magical girl’, which has a history of more than 50 years in Japan, in the character design of this series.

Actually, when the first episode of Puella Magi Madoka Magica was aired in 2011, some people said ‘a mellow magical girl anime has started’. It’s likely that the first impression of other people who saw the anime later on DVD or streaming was the same. The more familiar you are with Japanese ‘magical girl’ anime, the more likely you would be ‘tricked’. 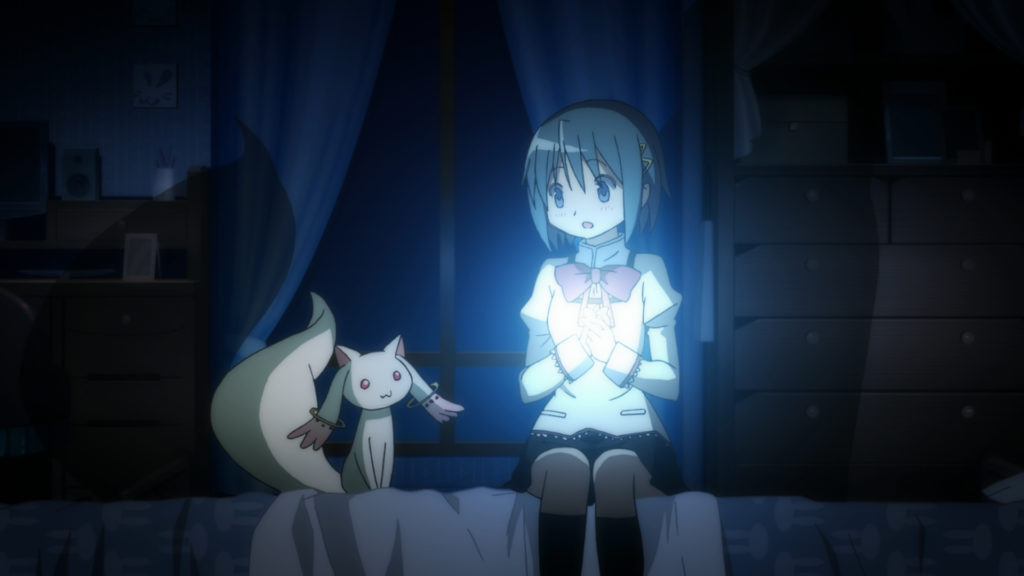 In the world of Madoka Magica, the magical girls fight against mysterious monsters (called witches in the series) while living their daily life. They transform when they encounter these witches and destroy them with weapons and magic. Their source of their power, an item called a Soul Gem, is purified and replenishes magical power, and when they have enough power, their own wishes become true. This setting seems authentic from the ‘magical girl’ point of view and it was established from episode 1 until the last scene of episode 3. However, the authenticity of the series only lasted up to that point.

Since the last scene of episode 3, viewers got a huge shock when they found out little by little what the Soul Gems and witches really were. When the secret of the magical girls itself was revealed, Puella Magi Madoka Magica completely broke out from the frame of the ‘magical girl’ genre.

Puella Magi Madoka Magica was written by Gen Urobuchi of Nitroplus. The story he has written is completely different from the ideal fantasy of the ‘magical girl’ which usually fulfills girls’ dreams. Gen Urobuchi has instead shown the cruel reality, also found in his previous works, by cleverly getting the point of contradiction and the unspoken agreement of the ‘magical girl’. He chose not to praise the girls’ innocent friendship, justice, nor dreams.

Any wish requires sacrifice, and only people who can handle that burder and that responsibility can make their wishes come true.

The wishes of the magical girls in Madoka Magica series vary, but in the story, Urobuchi is asking incisively how the girls’ motivations and movements affect the people around them and their society, and he is also asking how much the wishes are truly worth.

Puella Magi Madoka Magica went to the extremes: at the end the main character had to choose to either save the world or save the a friend. This kind of story development in which the end of the world is determined by the main character and some closely involved people is referred to as ‘sekai-kei’ in Japan. This concept applies to Neon Genesis Evangelion as an old example and Weathering with You by Makoto Shinkai is a newer example.

Gen Urobuchi has repeatedly utilized this kind of story in his other works like Psycho-Pass and Expelled from Paradise. Are you going to pursue your own desire or take responsibility for the society you belong to? What makes us decide (or make a mistake) when we are forced with an ultimatum? After all, at the ending of Puella Magi Madoka Magica, it seemed like the main character was forced to come up with the answer to the difficult question… one that has no right or wrong answer.

This received many criticisms, of course.

At that time in Japan, not only anime fans but also influencers such as celebrities and even professors and philosophers were having a debate about it on various media. Having such discussions is proof of an excellent production. The reason why Puella Magi Madoka Magica was accepted by adults around the world was because there was such a harsh question that breams with universality and strength. 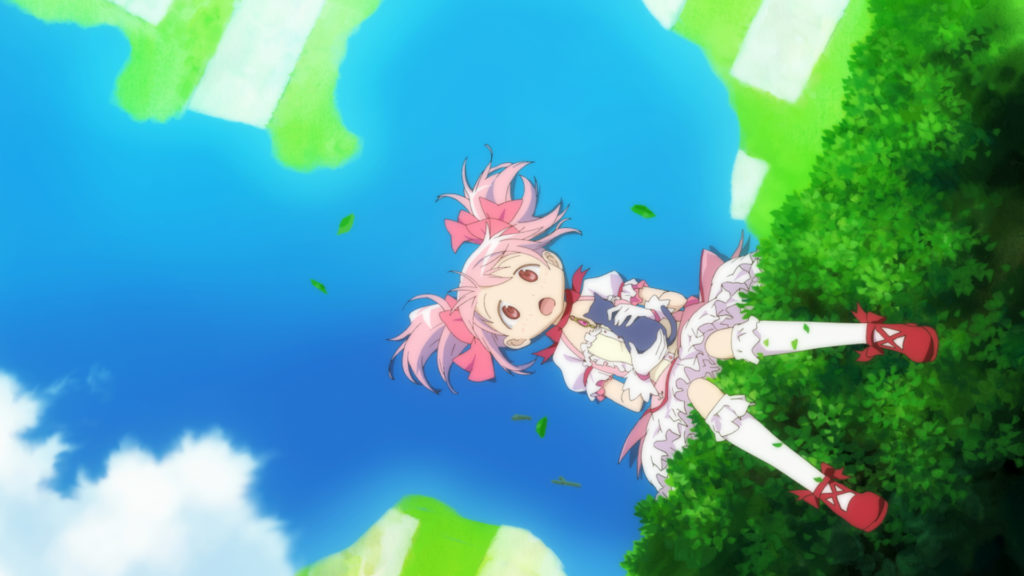 The perfect look of the magical girls by Ume Aoki and the intense story by Gen Urobuchi both appeal to human fundamentals. This is where the saying ‘a wolf in sheep’s clothing’ makes sense, but I really want to mention the producer of the series, Atsuhiro Iwakami (Aniplex), and express that he was in the center of this success. His achievements include choosing SHAFT to take on the animation duties.

SHAFT along with anime director and videographer Akiyuki Shinbo and Iwakami previously worked together on Hidamari Sketch and Bakemonogatari. The original manga for Hidamari Sketch was designed by Ume Aoki by the way. In addition to that, Iwakami had a connection with Gen Urobuchi from The Garden of Sinners and Fate/Zero. He acted as a go-between, and this is how the team was formed.

Last, I want to talk about the ‘wolf’ in the Madoka Magica series, which is its film staging. Like the story, it goes against the authentic ‘magical girl’ theory. The attractive ‘magical girl’ scenes, such as the transformation sequences, are so sparkling, but the house where the main character lives in is so simple, and the townscape is so awfully clean that the background appears dry.

Furthermore, I want to address the design of the other dimension where witches and their minions appear. It goes against the ‘magical girl’ theory and regular animation production, and this aspect also helps define the Madoka Magica series. The genius creators of this different dimension design is Gekidan Inu Curry, a duo that was discovered by SHAFT. The artists have worked on the Sayonara, Zetsubou-Sensei series, Maria†Holic, and Bakemonogatari, and they have established their unique style, which is spooky and grotesque, by using a collage technique. SHAFT selected them for the production of Puella Magi Madoka Magica in order to break the standard of ‘magical girl’, and they created an unbalance and a feeling of discomfort.

For more about Gekidan Inu Curry’s work in the series, please refer to our interview with Doroinu. 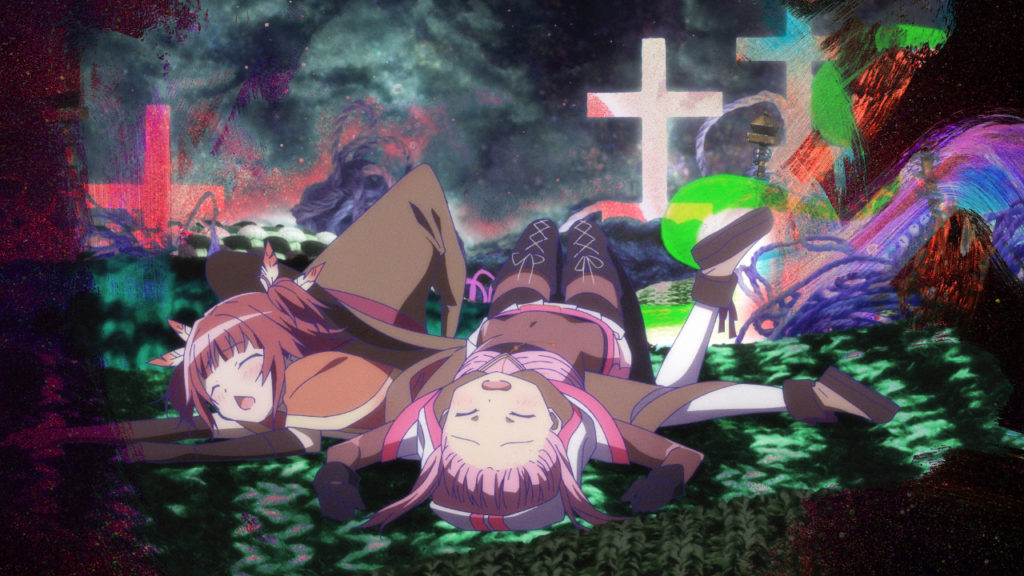 All of that said, Madoka Magica series wants to reveal the ‘true feeling’ and ‘public face’ behind one’s wish. Even if the reasons behind a wish are moral and beautiful, what is the truth? Are there other reasons that someone cannot tell others? Asking these questions is the nature of this series.

SHAFT and Gekidan Inu Curry set out to express this duality through the staging technique. The portraits, especially those of the magical girls, are drawn by using soft lines as if replicating the manga artist, Ume Aoki’s brushstroke, which is a symbol of the world of pure innocence that is full of kindness and light. On the other hand, when it comes to a scene with a witch, it expands the atmosphere that resembles a Russian or Czech dark fantasy, and chaos dominates the screen by adding Japanese occult elements; however, the art of the magical girls fighting against the witch never changes even in such atmosphere.

They suffer, laugh, and cry by keeping the same soft-touch art style. Light and darkness in our mind cannot be separated completely, and they are always mixed together. Madoka Magica is a mirror to the human nature: we cannot give a clear solution to anything because strong and different personalities collide with each other. This ‘film staging’ which delivers a message while controlling the intentional discomforting feeling is SHAFT’s signature technique, and it has been used in their recent productions too.

In a past interview, Iwakami said: ‘I thought that something interesting would be created for sure if Ume-sensei, Urobuchi-san, and SHAFT get together’. They surely met his expectations, and I think they actually exceeded them by adding Gekidan Inu Curry. Proving that point, Gekidan Inu Curry is the chief director/story editor, and Yukihiro Miyamoto from SHAFT (who scouted Gekidan Inu Curry) is the assistant director for the latest production Magia Record.

The end of the story is what it is. Madoka Magica as a series will continue to shake up the definition of ‘magical girl’ because of the storytellers and animation writers who weren’t afraid to think out of the box.