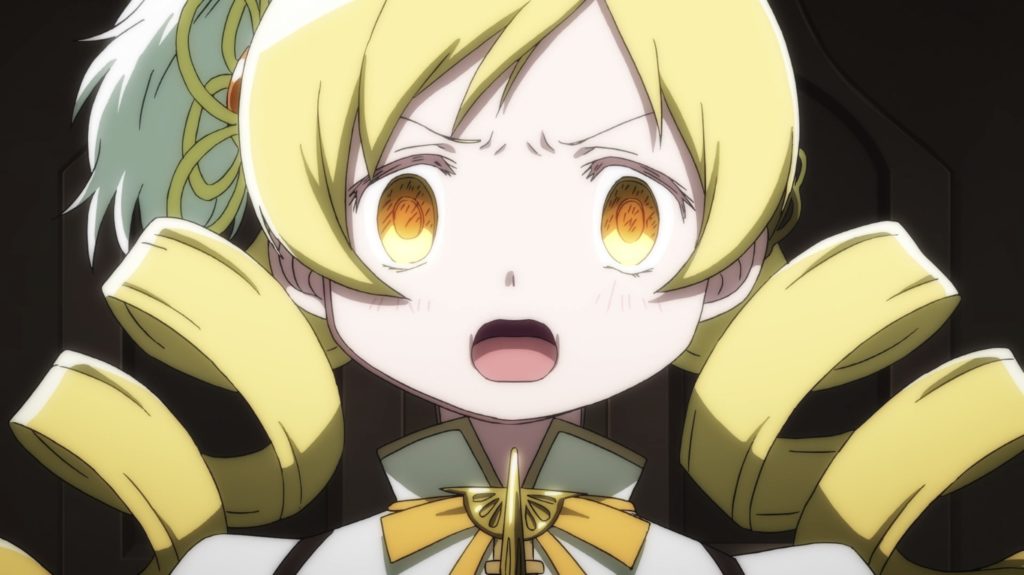 How you interpret the season finale of Magia Record and the end of the anime’s first season depends on whether you feel that split-cour anime such as Magia Record should be viewed as individual series in need of their own resolutions, or whether they should be viewed as a single combined storyline. If you were hoping for a complete story to be told within their first series, you may be disappointed.

Personally, I’ve never viewed Magia Record from this perspective. I felt the sheer amount of content the original mobile game offered made it difficult to expect that a single 13-episode run could adequately tell the complete story. In order to tell such a story, it needed more time, and with rumors of more episodes circulating since before the series began, it was more a question of whether these additional episodes would air immediately after this first season came to an end or whether we’d be made to wait before indulging ourselves with more content.

With this in mind, I’m satisfied with the ending and the series as a whole. The ways in which this episode brings together many disparate plot points and teases audiences with what’s to come has me excited to see what’s next. 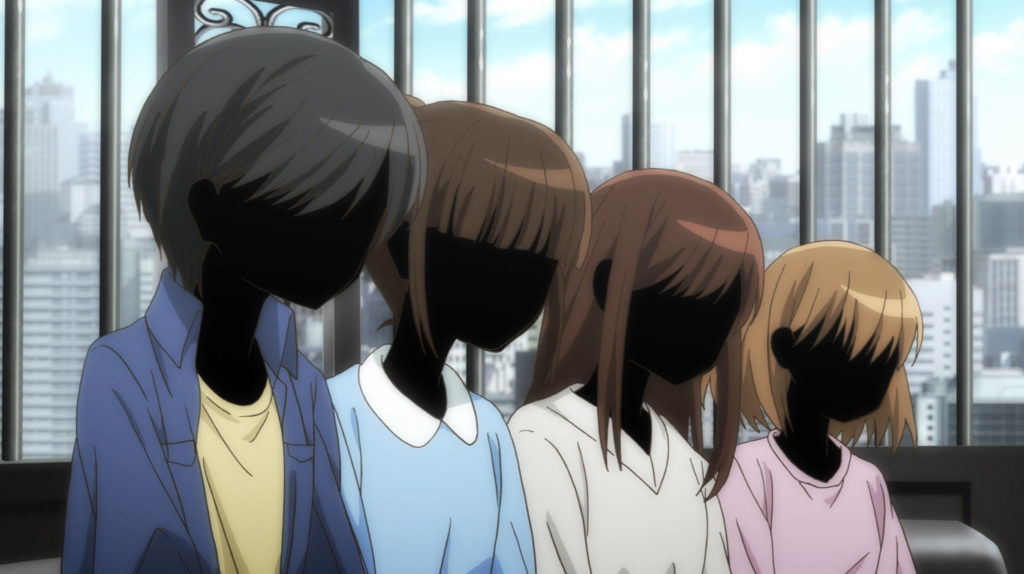 ‘A Faint Hope’ has a tall task ahead of it as it tries to cram a large amount of content into a short 23-minute runtime. To get from a point of revelation regarding the Doppel system for magical girls at the end of last week’s episode to the cliffhanger ending of this season finale requires the episode be stuffed with meaningful story moments, revelations and character development. For the most part, it succeeds at this.

It’s best to split the story of this week’s episode into 3 parts: the developing relationship between Iroha and Yachiyo, the deepening questions which surround the Wings of the Magius, their goals and, in particular, Iroha’s missing sister Ui, and finally the fate of returning series favorite Mami Tomoe.

For me, the blossoming of friendship with underlying romantic connotations between Iroha and Yachiyo is one of the most satisfying moments of the series to date. Even during early episodes where the series felt like it was treading water with little forward momentum, the constantly-evolving relationship between Yachiyo and the rest of the cast and her transformation from being a stand-offish, intimidating girl who pushed people away to one who was able to make friends was an element of the anime which kept the series going in places. 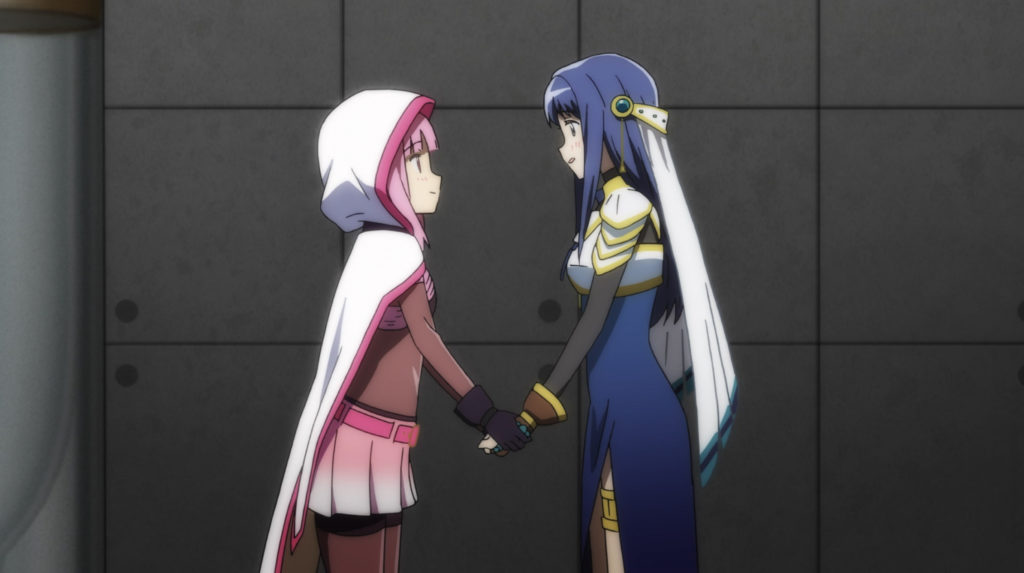 Over time, despite pretending to act otherwise, the actions of Iroha, a girl who persisted on making friends no matter how much Yachiyo pushed her away, led her to change in ways she hadn’t noticed. Soon, they were living together as teammates, and not long after that, more magical girls had joined them. She tried to keep her distance, and though she tried to act as though she didn’t care for those around her, her decision to run after them after they acted upon Mifuyu’s offer to meet the Wings of the Magius shows she cared about their wellbeing more than she was willing to admit, even to herself.

The Magia Record season finale uses this opportunity to explore the reasons she’s so distant to others, and it turns out the monkey’s paw extended out by Kyubey plays a hand in this. While not the most original backstory (Kyoko in the original series similarly entered self-isolation after her wish went wrong), Yachiyo’s wish to survive was one which mutated to one which came at the cost of those around her. She would survive, as she asked, yet those around her would betray her, like Mifuyu, or die. 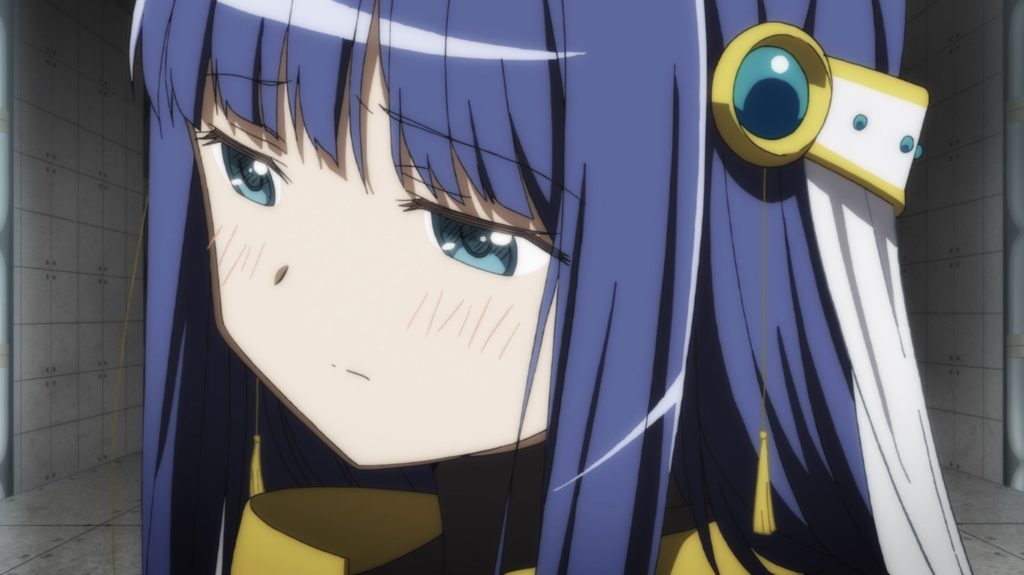 We learn this as Yachiyo almost succumbs to the sadness this solitude brings in the midst of battle before Iroha reaches out. She’ll stay close no matter what, and Yachiyo believes her. They never leave each other’s hands till the closing moments in almost-romantic intimacy, and it’s a nice culmination of her story to this point while giving Iroha something to fight for other than Ui.

An Angel Brought Down to Earth

The final two things the episode seeks to focus on, Mami Tomoe and the Wings of the Magius, are addressed in tandem with one another in perhaps the most spectacular set piece of the series to date. If the first half of the Magia Record season finale is a more intimate affair following Iroha and Yachiyo, the second half is a movie-scale, brilliantly-animated battle sequence against a Doppel of Mami as she loses herself fighting for a group who maybe care for something other than the salvation of magical girls they allow their cult followers to believe. 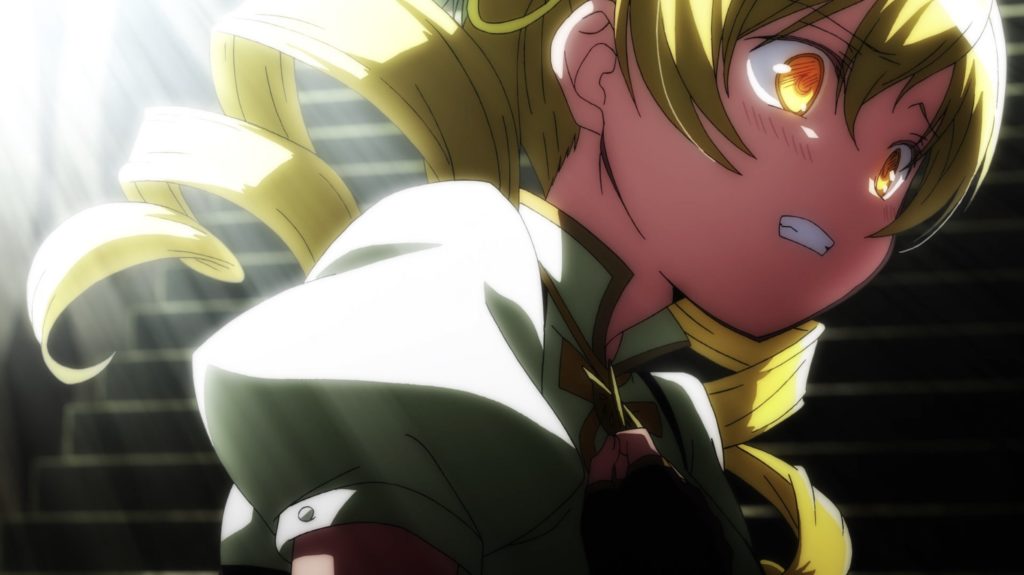 Mami’s character has always been defined by her protectiveness over other magical girls, and her desire to save them from the danger of their destiny. This makes her a perfect target to be sucked into the beliefs of a cult such as the Wings of the Magius, allowing the group to mutate her into something which will do whatever is necessary if she believes it will help such a cause. Even if it costs her life, she will do whatever she deems necessary to do what she feels is the right thing.

What follows is as painful from an emotional standpoint as it is a joy to watch. While her initial introduction into the series back in episode 5 felt like little more than fanservice, her integration into the cult has given her admittedly unnecessary inclusion into this new series purpose. Mami wants to save everyone, so she will fight if she believes it will save other magical girls from despair. 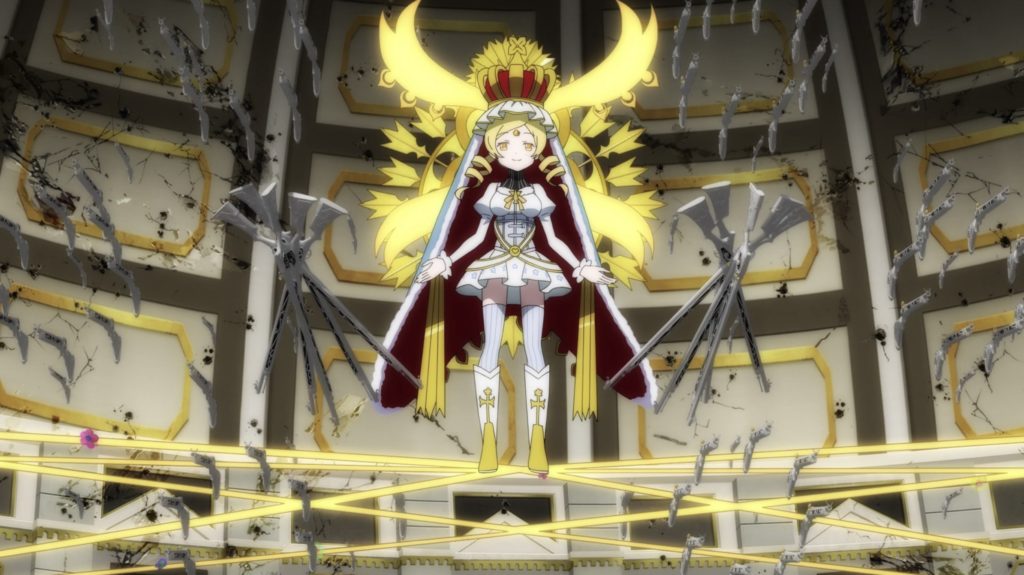 She may transform into a being which shines like a guardian angel as a halo of light glows around her and thousands of guns and bullets rain down from the sky around her to pummel those that stand in the way of the Wings of the Magius, but with this fight, she has lost control of herself and turned into a pawn for those who pull the strings in the cult she has signed up for. Her despair drives the battle, while she transforms into a being almost unrecognizable from her original human form. All the while, Touka leaves to adjourn a meeting of all the magical girls who have signed up for her cause, giving up on Mami’s life in the process.

‘Thanks to your cooperation with our research, we should be able to create Uwasa more efficient at collecting emotional energy. That’ll be helpful for the liberation of magical girls, so if you die, you’ll understand, right?’ 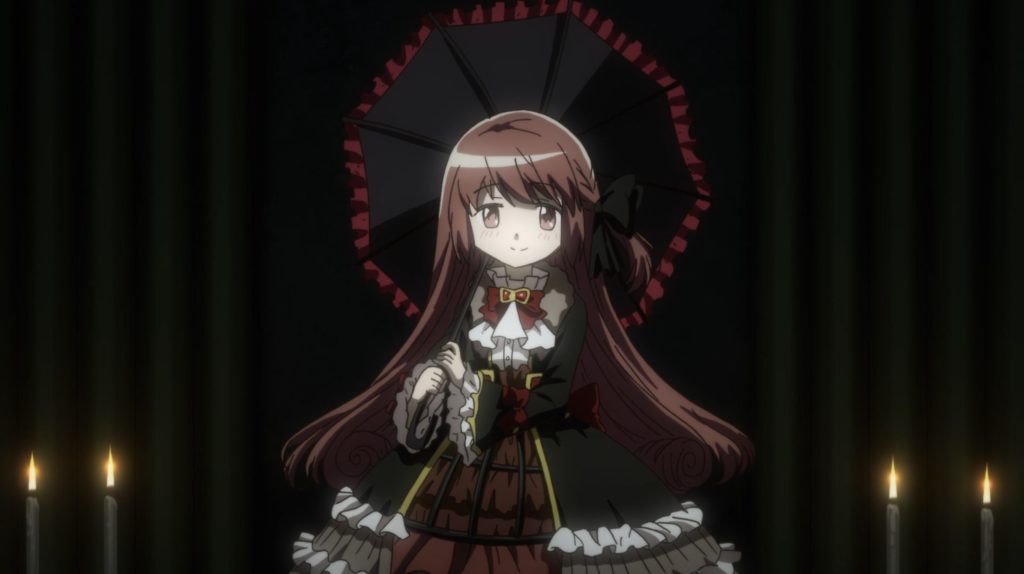 While we witness a stunningly-animated set-piece battle that utilizes the entire space of a massive room within the abandoned building to battle within, amplified by some stunning moments of animation, the Wings of the Magius are being re-contextualized to the audience in the closing moments. If they’re collecting the energy for something other than the Doppel system, what’s their true purpose? Do they even really care for liberation if they’re willing to sacrifice the lives of their followers to achieve the goal?

Despite being a season finale, this episode of Magia Record mostly serves as a place to establish a new direction for the series’ second core currently in production. As such, it’s difficult to review this series as a whole when we’re essentially at the halfway point. If I were to compare Magia Record to the original series, it would be like reviewing that series in its entirety after the 5 episode mark. By then, the series we thought we had been watching had been recontextualized and reimagined, the possibilities, scope, and depth of the series only increasing as a result of plot twists. However, we were only halfway through that anime. 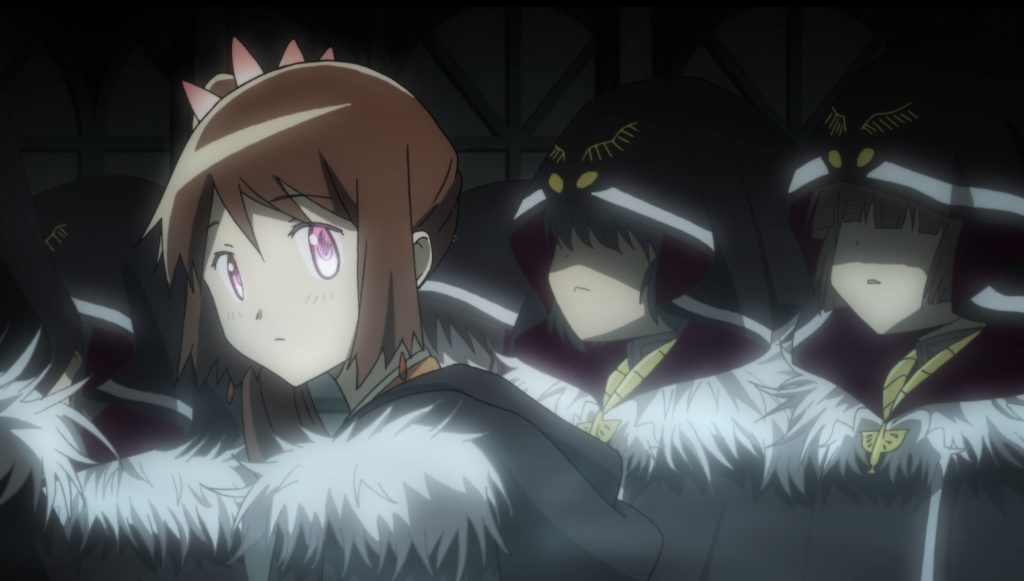 In turn, Magia Record’s season finale similarly recontextualizes the show we thought we had. The episode ends with a giant meeting of the Wings of the Magius where most of the friends our characters had made throughout the series now integrated into the group by choice or, seemingly, by force. The name drop of the Walpurgis Night at the very closing moments only further complicates matters, as the thought of magical girls willingly bringing such a fearsome witch upon themselves begs the question as to what their purpose with the creature will be.

The biggest challenge the Magia Record anime faced ever since episode 1 was giving viewers a reason to care about the anime. Why should fans who saw the story of Madoka Kaname through to its conclusion care about a new series in the same world with a brand new cast? With adherence to the series’ unique visual style and musical wonder which elevates even the most mundane of scenes, alongside an intriguing story that adds new wrinkles to an already established world, I think the series achieved this lofty goal. 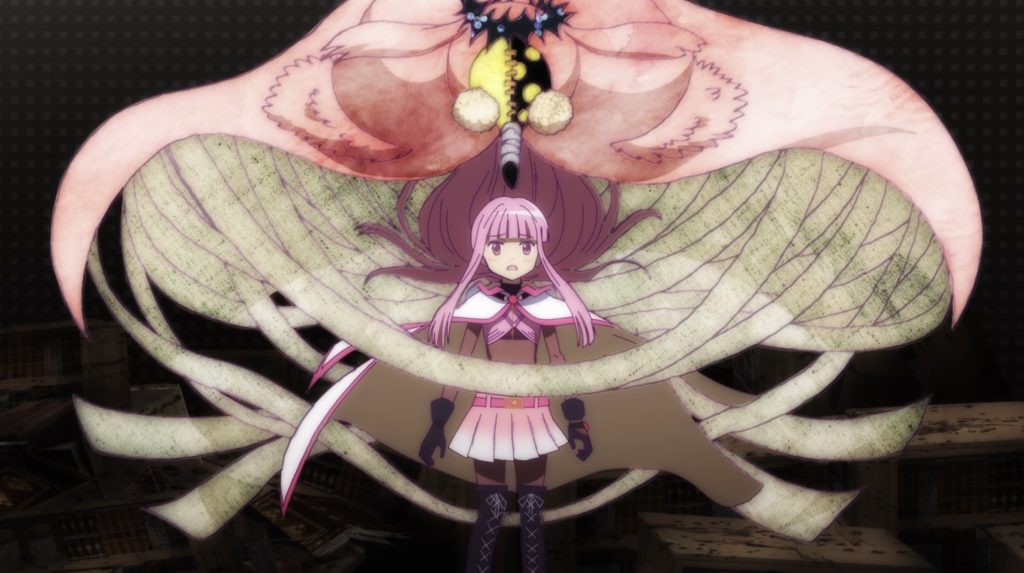 While it’s disappointing that the anime took until just a few weeks ago to really ramp up its focus on the overarching plot of the series and failed to give more story resolution before going on a months-long hiatus, I can’t say I’m disappointed with my experiences of this series. I thoroughly enjoyed Magia Record season 1, and I can’t wait for more.

Magia Record: Puella Magi Madoka Magica Side Story is currently streaming on Funimation, Crunchyroll, and HiDive. Also be sure to check out our month of special features on the Madoka Magica series, including exclusive interviews with the creative forces involved in both Magia Record and Madoka Magica!