Magia Record Episode 2 Impressions: Is The Series’ Mobile Roots Holding It Back From Greatness? 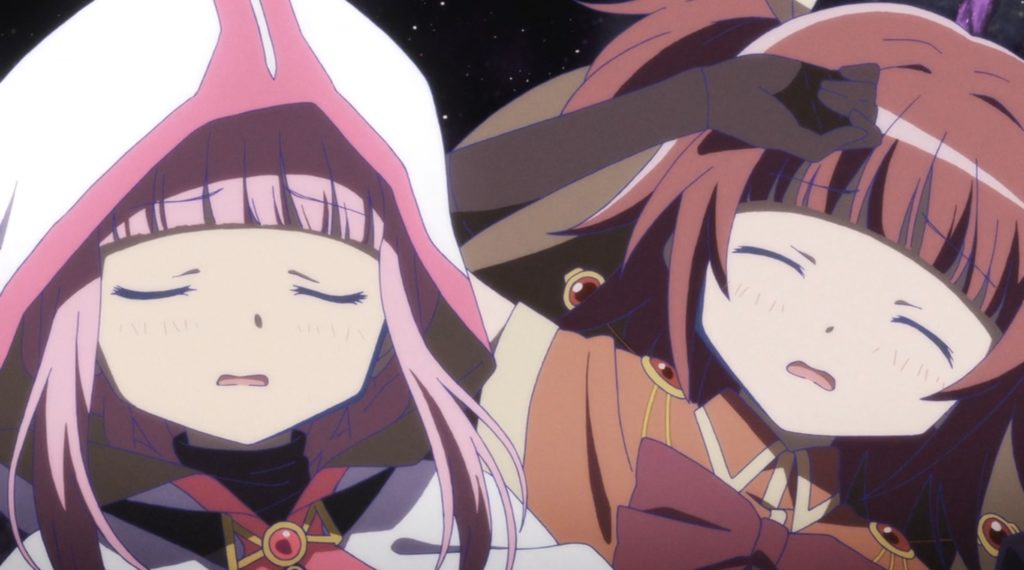 While episode 1 of Magia Record: Puella Magi Madoka Magica Side Story could be considered a reintroduction for older fans and a catch-up for newer fans while introducing its new setting and fans, episode 2 is the moment where Magia Record truly sets the pace for the series ahead, for both better and for worse.

Magia Record episode 2 is the first true reminder of what made the original series such a massive success beyond the incessant callbacks of its premiere, as the new story surrounding Iroha’s attempts to rediscover her wish and the mysteries of Kamihama City sets itself into full gear. This week sees the show carve its own path, something that leads the show into some of the episode’s highlights while illuminating potential concerns that could plague the show as it develops.

I Saw It In a Dream… 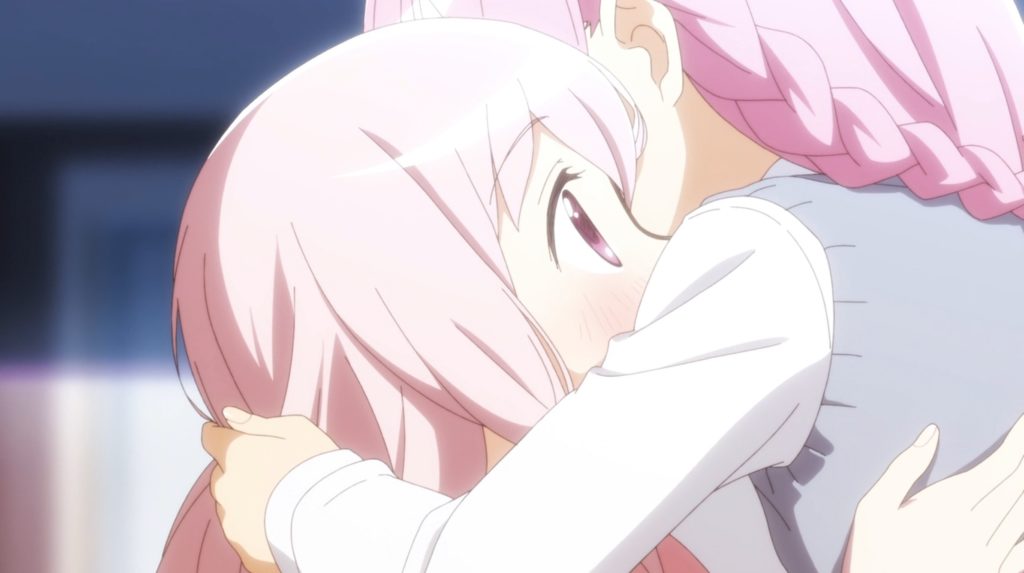 At the end of the previous episode, Iroha learned through a dream that her forgotten wish was to cure the illness of her sister Ui… but wait, Iroha doesn’t have a sister, right? Could she be imagining it? That’s the question this episode attempts to solve, and since Iroha’s memories all relate to the medical hospital found inside Kamihama City, this means that she must return to the area for the first time since being warned away at the end of last week.

Episode 2 of Magia Record is mostly spent on further expository dialogue; with audiences now reacquainted with the world of Madoka, the show has the chance to explore new ideas and expand on its premise to deliver stories with the potential of reaching the heights they once did at the beginning of the previous decade. 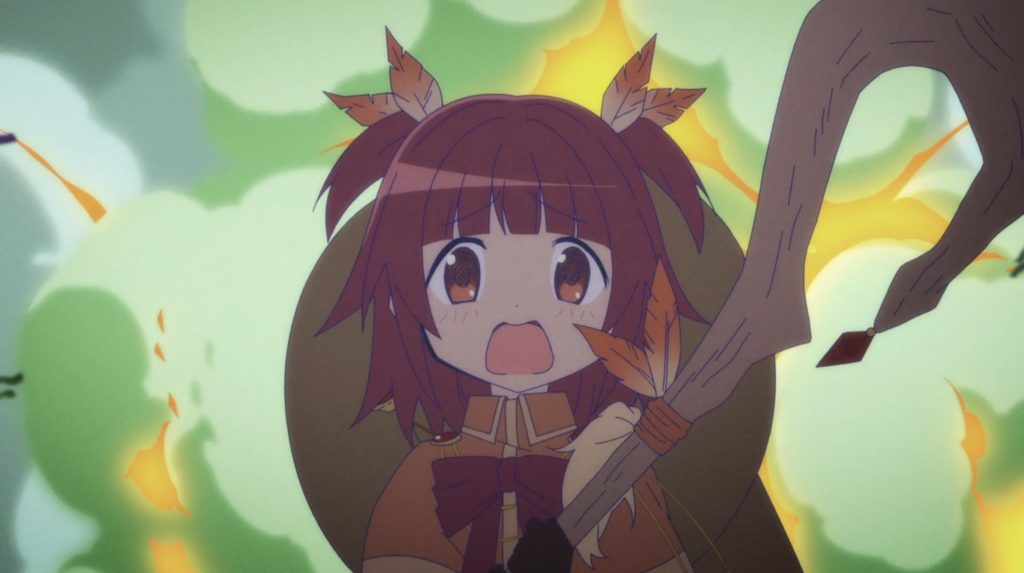 Here Iroha runs into three magical girls who fight as a team within the Shinsei Ward of Kamihama City, Kaede Akino, a childish yet friendly red-haired girl, a blond-haired motherly guardian figure in Momoko Togame and the distant, quick to anger blue-haired Rena Minami. These girls work together to take on the stronger witches that populate the city and have bonded and become close to this. This episode focuses on this dynamic as a clear attempt to set the story of Magia Record apart from that which has come before it as we’re introduced to a trio of girls who clearly care for one another yet have lost a lot from their roles as magical girls that impacts their daily lives and their ability to communicate with one another.

You see this most of all within Rena’s character. She’s more averse to creating a close connection to Iroha, and we learn as the episode goes on of her attempts to keep her distance from people at school and, at times, even her close friends. Her transformation magic is, in a sense, a manifestation of this, her need to keep a distance from others even when she cares for their wellbeing making her a different person depending on the situation. At the same time, you get a deep sense of the love they share for one another, something that plays directly into the episode and the cliffhanger it ends with. 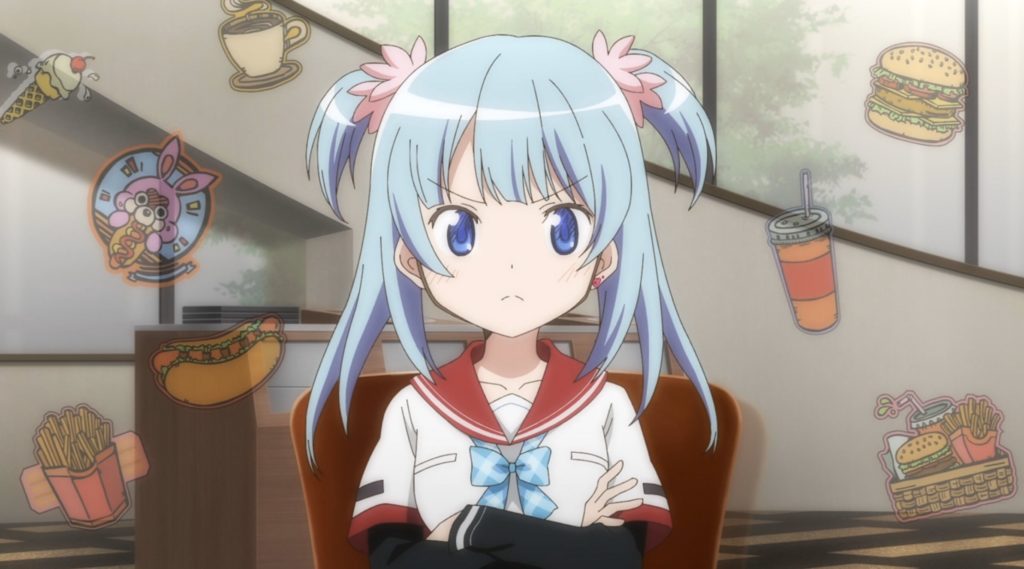 While many of the interactions Iroha has with this group of friends, as well as the shifting dynamics that occur due to her presence, are a result of her investigation to search for her forgotten sister throughout Magia Record episode 2, this is mostly ignored for much of the episode, and this isn’t a bad thing. As these friends become more integrated into the web of mysteries surrounding Iroha, this can be reintroduced in a way that makes the intrigue surrounding the truth about Ui that much higher as more people become invested and involved in the mystery.

Much of what Magia Record episode 2 seeks to achieve is an establishment many of the mysteries the series will seek to answer over the next few months, some of which were first introduced last week. Who is Ui? Why is she missing? What is Kamihama City and who are the powerful witches who inhabit it? Is there a link between the calls to visit Kamihama City we first heard within episode 1 and the mysterious events, more powerful witches and the existence of Young Kyubey in the area which help to set it apart from any other location?

These are all strong moments that are almost exclusively explored through dialogue and the series’ trademark ability for interesting scene composition that considers both film techniques and the power of animation to create unique environments and imagery to embolden the story’s thematic core and heighten emotional moments. 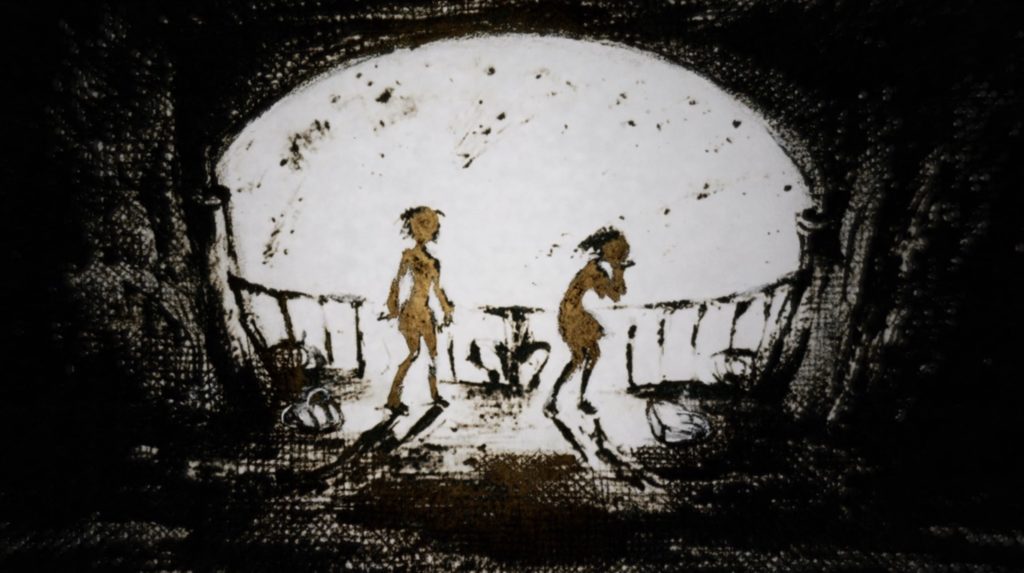 This, unfortunately, leads me to my key issue with Magia Record episode 2, and one I fear may permeate through the entire series: the witches. As I discussed in my preview of this new series, one of the elements which elevated the story of the original Madoka Magica series was not just the strong central concept or the animation quality or the characters, but the ways in which the series economized the use of the creatures within the anime.

In that series, witches were an animation showcase but acted more as a framing device for many character moments which the rest of the series tackled, giving each fight purpose even if it reduced the number of witches we saw within the series itself. Witches existed, but the story centered around characters without an obvious antagonist outside of Kyubey, and the series benefitted from this. This has changed, and not necessarily for the better. It results in a disjointed series where witch fights feel like filler material, in spite of their wonderful aesthetic and pleasing music.

Near the beginning of Magia Record episode 2, a witch interrupts Iroha’s journey to Kamihama City, yet the visual representation and the fight Iroha has with the witch holds little relevance to the story being told at the time. The fight is impressive to look at, but it feels like an interruption that hurts the pacing of the episode instead of being a highlight of the episode like it should be. Although Iroha first meets the trio of friends within this witch’s labyrinth, this is separate to the witch itself and makes the entire fight little more than an animation showcase: not necessarily a bad thing when it looks this nice, yet still tainted with disappointment. 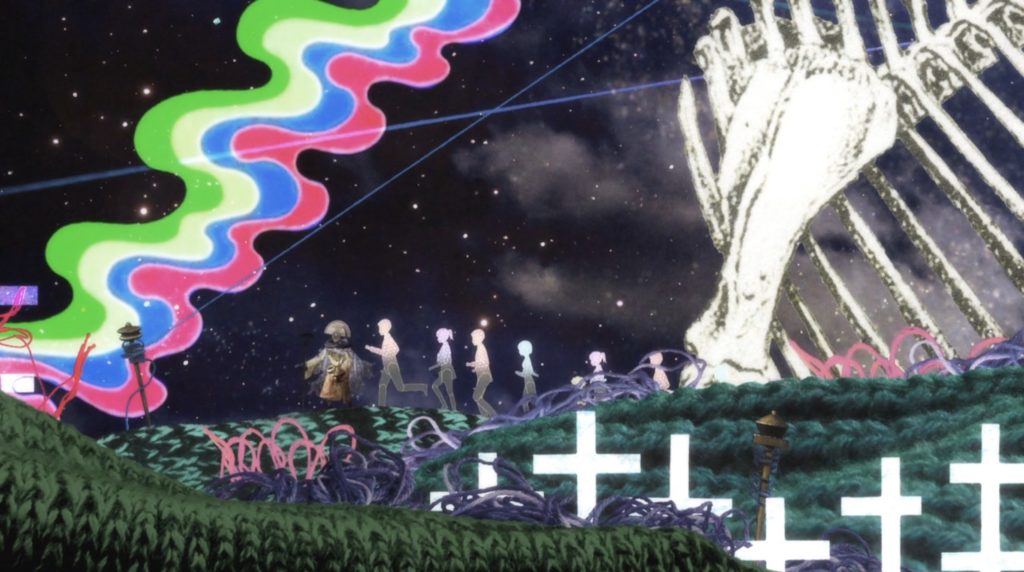 This is perhaps my biggest concern for the entire series going forward, as this issue feels like a systemic problem which stems from its mobile origins. As I’ve continued my journey through that game’s story I’ve often found the gameplay portions of the experience to be the more bothersome moments. Witch fights within the game exist as an excuse for its existence, at least at this early stage, a reason for players to interact with the game (and spend money on its gacha mechanics) and in place so players have something to do to break up heavy story sections, more than the idea that these moments exist for the purpose of furthering the story. Witches are the central tenant of the gameplay, and also the biggest obstacle to enjoying the game’s story.

So far, within the anime, this issue still remains. Witches, which once existed to deepen story and conflict, now break up pacing and feel like nuisances that get in the way of the compelling narrative the anime has to offer. They have nothing to offer from a story perspective so far, and my worry is that this issue will only become more of a barrier as the series progresses.

Magia Record episode 2 builds upon what came before it to further bring viewers into its world and story while leaving an enticing cliffhanger that looks to set the tone for the potentially darker moments to come. If episode 1 was a reacquaintance and episode 2 was an expository blowout, episode 3 could become a set-piece for the series in the same way the original series was able to achieve. Personally, although issues still remain, I can’t wait to see more.