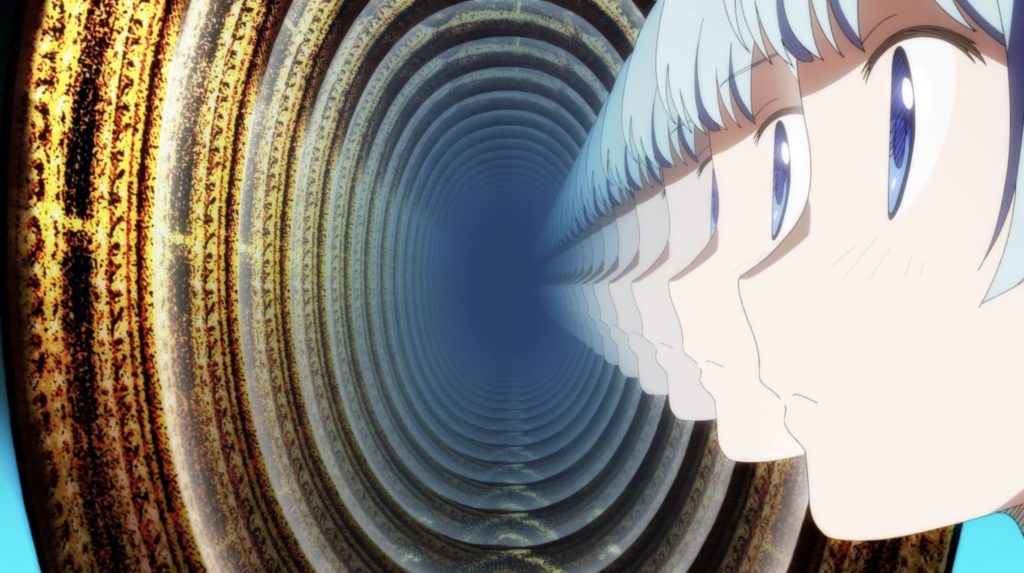 The previous episode of Magia Record ended on a tantalizing cliffhanger, having used the entire episode to introduce us to a friendly group of new magical girls in Kamihama City only for an argument between them to rupture their friendship, beginning a chain of events which causes Kaede to be captured by witches. The ominous ending of the episode led many to fear the worst, as cast their minds back to the original series of Madoka Magica and the infamy of a similar moment in the original series which acted as a watershed moment for the series which fuelled the franchise’s unparalleled success for a magical girl series up until that point. Parallels could be seen between the original Madoka Magica and Magia Record heading into episode 3, and the question on many people’s minds heading into this week’s episode was in regards to what direction the anime would venture into and whether we were about to see history repeat itself.

Only one question remained: could Magia Record episode 3 hold up to this high level of excitement and anticipation? 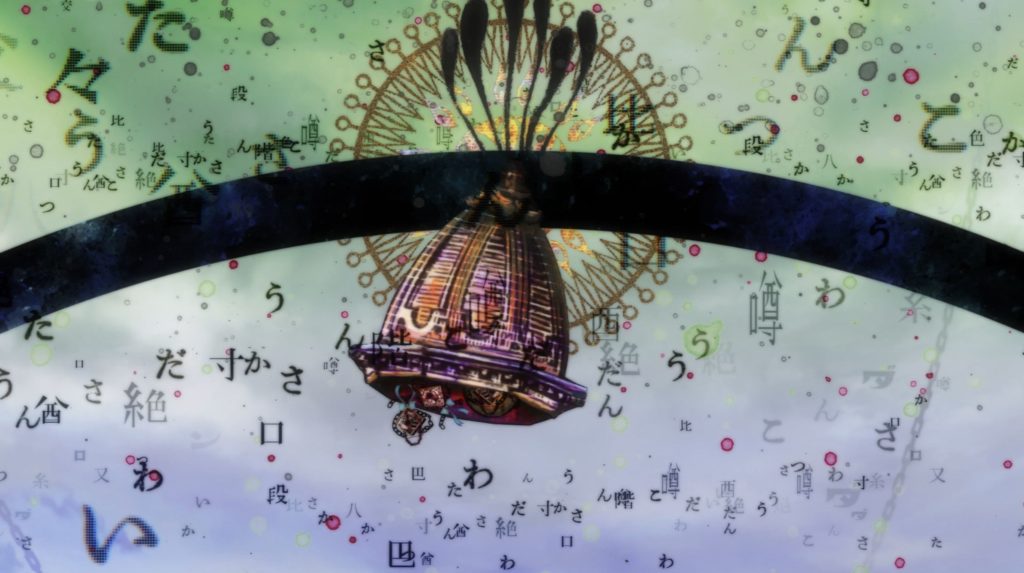 Magia Record episode 3 intends to act upon the cliffhanger left at the end of last week’s episode, with Kaede having been taken into a witch’s labyrinth by mysterious creatures after Rena wrote their name on the friendship-ending staircase. Rumors stated that those who tried to make up after ending their friendship by writing their name here would mysteriously disappear and there had been multiple cases of this happening in the past, and Kaede felt the consequences of Rena’s anger by being taken away after she tried to end their feud.

The focus of the episode is placed upon Rena as she wrestles with the guilt of her friend being captured due to her stubborn nature and her actions. Having been introduced to both characters alongside Momoko as a trio of magical girls working together in Kamihama City, many elements of their characters beyond their basic character traits remained a mystery to the audience. While we got to know the personalities of these characters, we weren’t allowed to understand their motivations and feelings as they kept this both from the audience and from Iroha herself.

As a result, Magia Record episode 3 is able to stand out as the series’ strongest episode to date by beginning to tap into the metaphorical, indirect storytelling where the original series always shone the most. The power of the Witch within Magia Record and the Madoka Magica franchise is their malleability, the ability for these witches to visually represent an idea or emotion by providing a template upon which any visual and conceptual idea can be placed upon it. This gives the series the ability to tell an almost-endless number of stories, and its an ability this episode uses to superb effect.

As I mentioned with my episode 2 review as a problem plaguing both it and the series premiere which preceded it, what helped ensure the original Madoka series’ success was the ways in which not a single moment or design choice felt wasted and unnecessary without service of the larger plot, where every Witch, even those featured as a montage during Sayaka’s descent into madness in the original series as she lost her will and reason to fight, held a meaning to them which always felt lacking in this series up until now as a remnant of Magia Record’s free-to-play mobile gaming roots (and its consequential disjointed storytelling). 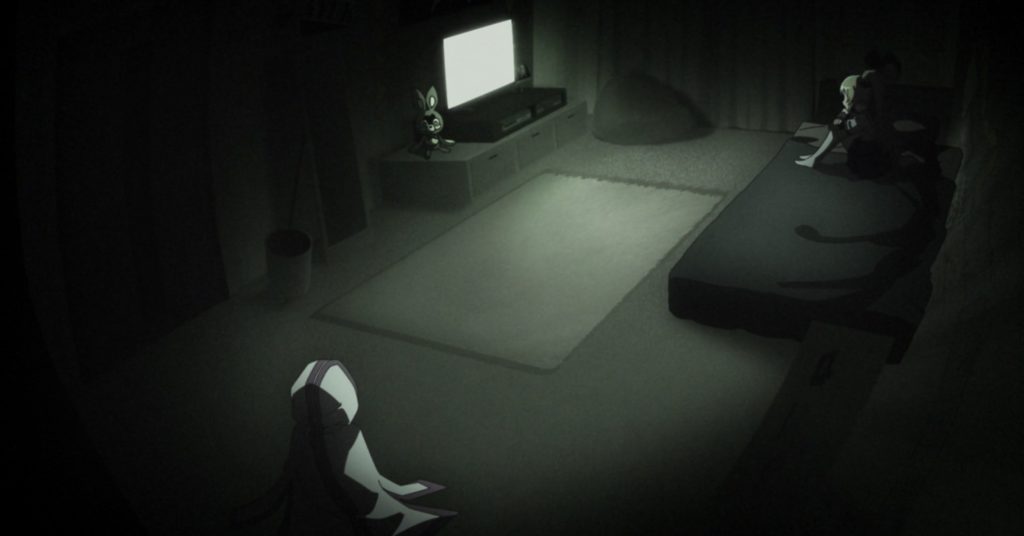 For Magia Record episode 3, the central conflict between Rena and Kaede is explored and resolved in what is easily the series’ most impressive and intricate Witch’s Labyrinth to date. Re-contextualizing their feelings for each other and their relationships, the endless staircase becomes a route to salvation as well as a prison that confines them. Rena, who once came across as brooding and cold towards those who were supposedly her friends, was now a product of recognized personal flaws of self-loathing and jealousy projected onto others, an idea itself represented through her powers of transformation. Kaede’s lack of confidence and fear of losing those around her is also what manifests as her insecurity and shy demeanor, and all of this is revisited and reinterpreted through the visual imagery and design of the Witch and the Labyrinth they become trapped in order to save Kaede.

As you would expect from the series, the battle with the Witch, encompassing the entirety of the second half of the episode, is a visual wonder, bringing an experimental visual style unmatched in TV animation while hooking viewers on every second and action these characters take as they try and defeat the witch. The ways in which these aforementioned conflicts factor into the ways in which the Witch is defeated only adds further to the splendor of the fight as a whole, providing an experience I had been waiting for, ever since the series premiered a few weeks ago.

Forgotten in More Ways Than One

With the focus being shifted towards the magical girls of Kamihama City, you’d be forgiven for ignoring the mysteries surrounding Iroha’s sister. While priorities have understandably shifted for our protagonists as they fight to save Kaede’s life, the episode basically ignores this subplot aside from brief mentions near the beginning and end of the episode, almost as a reminder of Iroha’s purpose more than anything else.

The hanging fruits teasing Ui’s disappearance are dangled ever-closer to the audience in Magia Record episode 3 via a flashback to the character’s time in the Kamihama City hospital, yet aside from the unexplained introduction of two additional characters who shared a hospital room with Ui their existence is neither further acknowledged nor developed within the episode itself. Despite the importance of fleshing out Iroha’s past, Ui’s disappearance and the intrigue surrounding Iroha’s mission to find her, the existence of these moments feels like time-fillers and a pace-breaker.

As things stand, Magia Record has come roughly to the close of its opening act during episode 3 with a firm establishment of multiple key story points which will be further developed and (hopefully) resolved over the series’ remaining episodes.

What is it which caused Ui’s disappearance and forgotten existence? For what reason has Kamihama City become a hub for powerful Witches and magical girls as power is slowly being sucked into the area? What is the Chain Witch, the cause of the staircase witches and other witches which take root within Kamihama City? What is the identity of Baby Kyubey, whose existence even confuses the real Kyubey itself? Finally, what is the link between Ui and all these mysterious events that occur within Kamihama City? 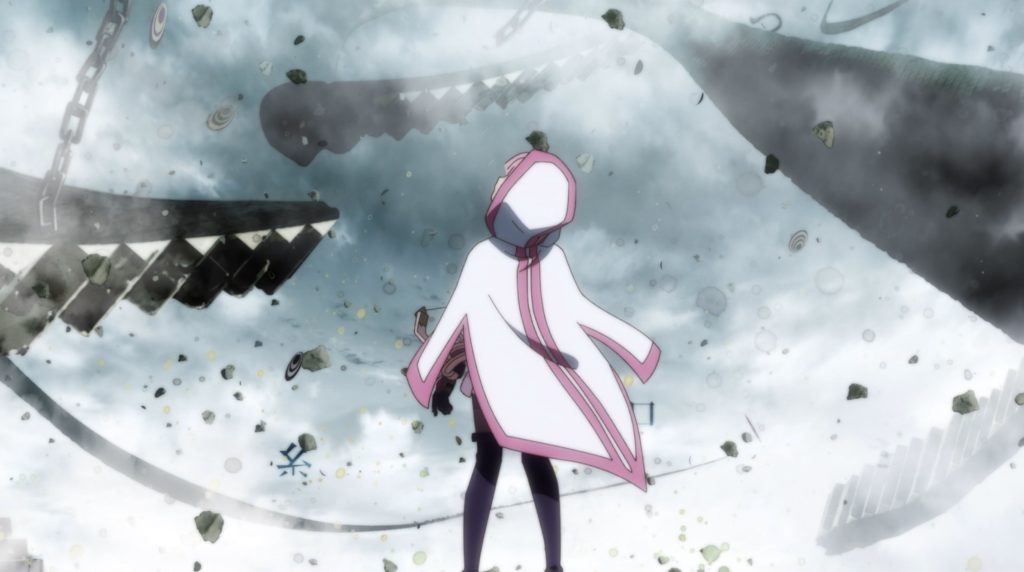 Ui’s disappearance acts as the bow tying all these mysteries together and serves as a catalyst and, potentially, the solution, to all the mysteries occurring within the city. As things stand, episode 3 of Magia Record leaves me less interested in learning about the identity of Ui and the cause of her disappearance as I am with the city of Kamihama itself and all its intricacies and inconsistencies. This is fine for now, as there’s not only plenty to keep me as a viewer engaged but many impressive elements intersecting at once to keep me on tenterhooks as I eagerly await the next episode. My fear is that, if this storyline isn’t further explored and complicated, my interest in her fate, and in turn the series as a whole, may dip in spite of the many impressive elements found elsewhere.

The conclusion of episode 3 of Magia Record is perhaps the biggest divergence to date between the ideas established in the original series and this side story’s unique take on the world of Madoka Magica. This is for the best, I feel, with this week’s episode proving to be the strongest to date as the series’ various main characters are further developed through a stunning Witch’s Labyrinth, while the intrigue surrounding this new setting being set up continues to grow. A post-credits scene acting as the beginning of the series’ next chapter only furthers this intrigue. 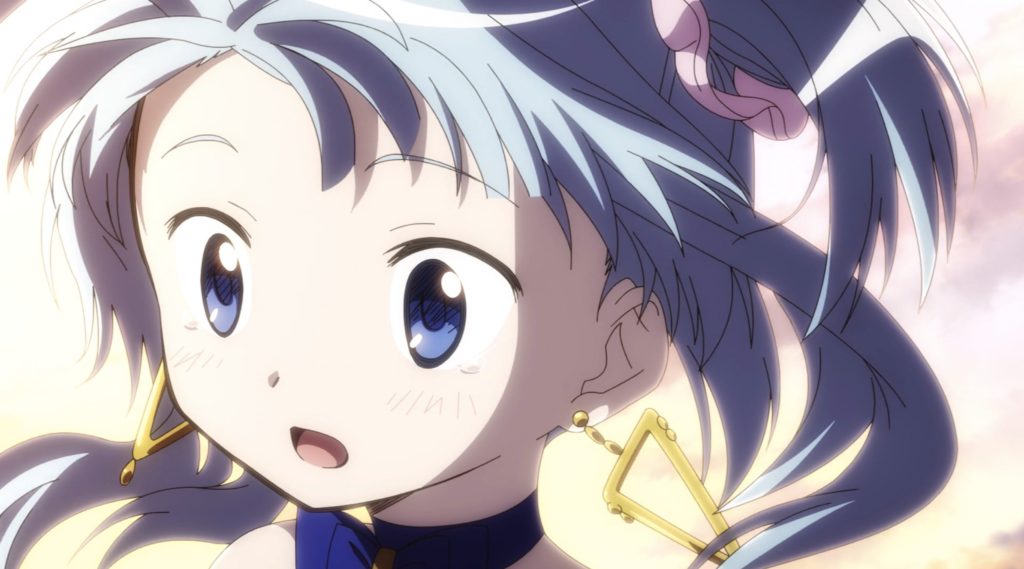 Concerns remain around whether the many plot threads the series is juggling can come together when the storyline tying it all together, Iroha’s search for her missing sister Ui, has yet to find the hook it needs to make the audience care enough to learn the truth. This is only a minor nitpick, at least for now, as the characters and especially the world of Kamihama City are enough to retain my interest and leave me wanting more.