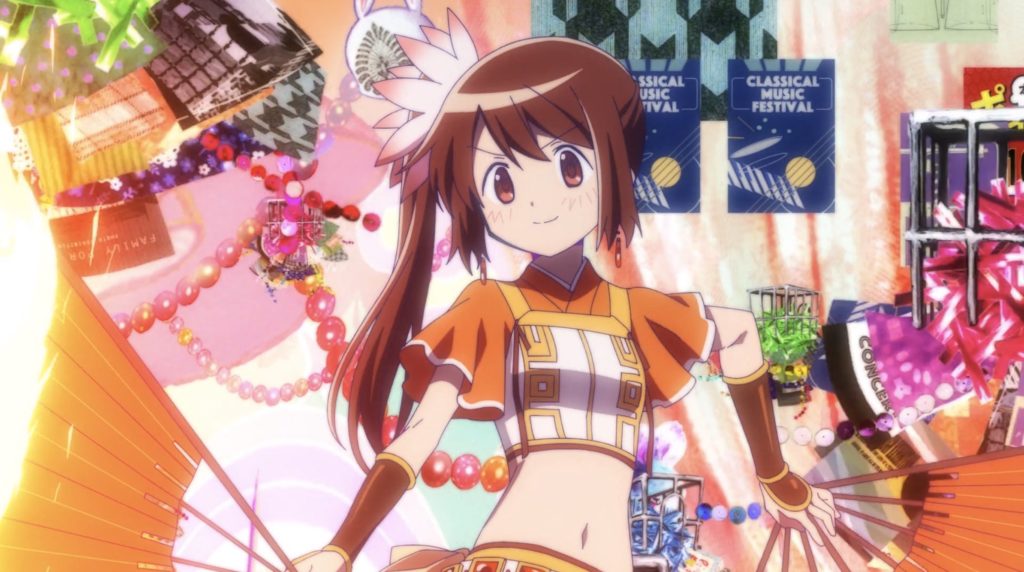 I feel like I’m being trapped in the web of mysteries which Magia Record has slowly but up over these last 4 episodes, leaving me on tenterhooks and desperate to know what comes next.

It’s a weird experience to be watching Magia Record on a weekly basis. This is the first time I’ve had this sort of experience with the franchise so far since I never saw the original Madoka Magica series as it was originally airing. I was already a fan long before the release of the last major piece of new content, the Puella Magi Madoka Magica: Rebellion film, yet the nature of a movie means that I could experience the complete story it wanted to tell all at once without having to wait weeks at a time for a new episode to premiere. 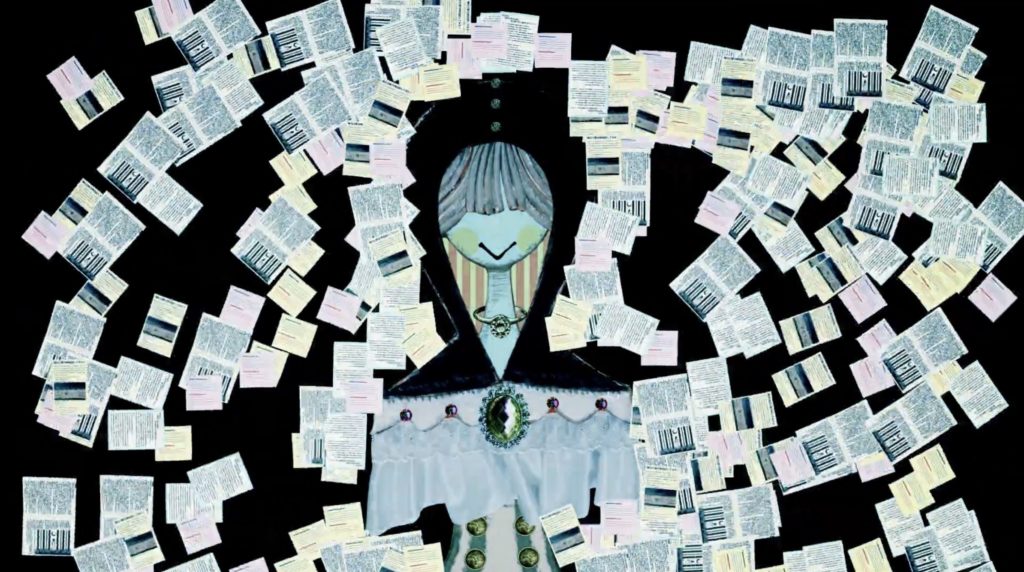 I’ve always been impressed by the ways in which the original series was able to interweave its story into both dialogue and setting in a way that resulted in not a single moment being wasted. However, I feel that the piecemeal release of this story has meant that I was never able to truly appreciate the growing intrigue Magia Record has established for itself over the course of just 4 episodes.

Issues I’ve raised with pacing and tone in places still stand true here as they once again raise their head during this most recent episode, yet I can’t help but appreciate where the series is at and the intrigue and power it holds over me at such an early stage. 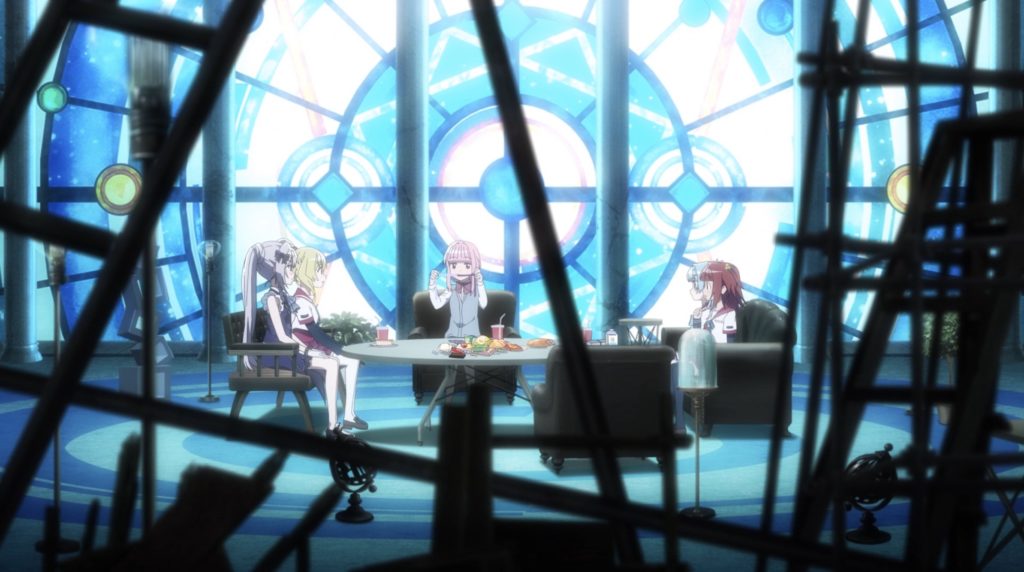 The defeat of the creature behind the Friendship-Ending Staircase at the end of last week’s episode left both the audience as well as our characters with as many questions as there were answers. The salvation of Kaede was definitely a more interesting conclusion to the episode than if the creature had taken her life, yet its defeat left our rag-tag group of magical girls empty-handed in more ways than one. Her life was saved, as well as the lives of all those who had gone missing, but no Grief Seed was left by the creature as they were not a Witch, leaving the identity of the creature responsible for the Labyrinth completely unknown. This wasn’t, in actual fact, anything like the Witches they needed to fight to survive, and potentially lacked any link to the Chain Witch which was threatening the city. Rather than providing answers, more questions arose from the creature’s defeat.

Magia Record episode 4, while not exploring the Chain Witch or the identity of the creatures behind this staircase (and the possibility of a link between the two), instead focuses on the rumors other than the staircase in relation to Ui. After all, if some of these rumors cause people to go missing, maybe there’s a link between them and Ui’s disappearance. And so we’re introduced to Tsuruno Yui, a character who, supposedly, knows more about these city-wide mysteries than most. 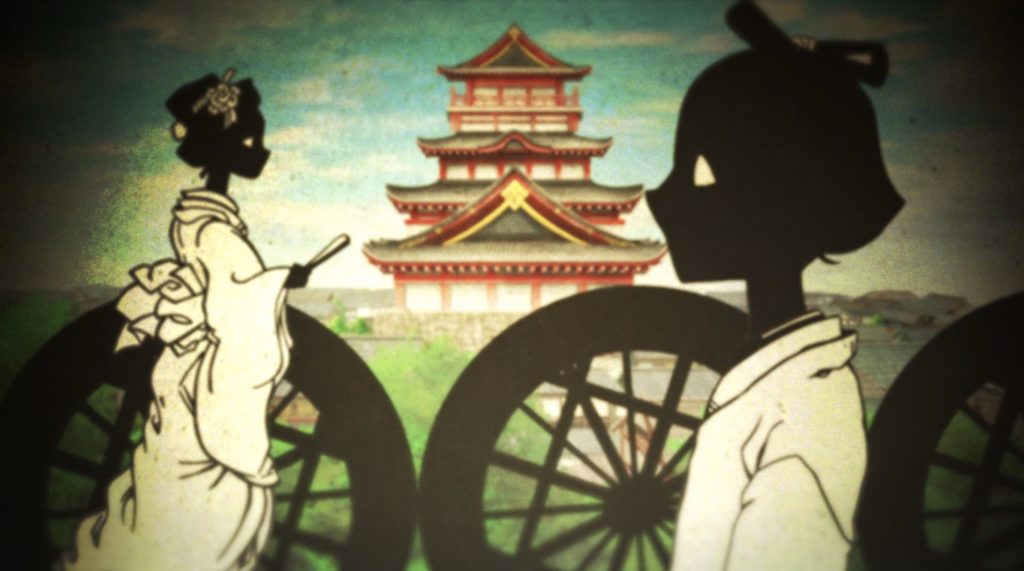 What makes this episode compelling is the fact that almost every moment builds upon what came before it, helping to make episode 4 of Magia Record both intriguing and intense in equal measure. Almost completely devoid of action, the episode focuses on Iroha, Tsuruno and Yachiyo as they wander the city and its various shrines in an attempt to uncover more about a rumor where a shrine is able to grant visitors the ability to reconnect with those they once lost. 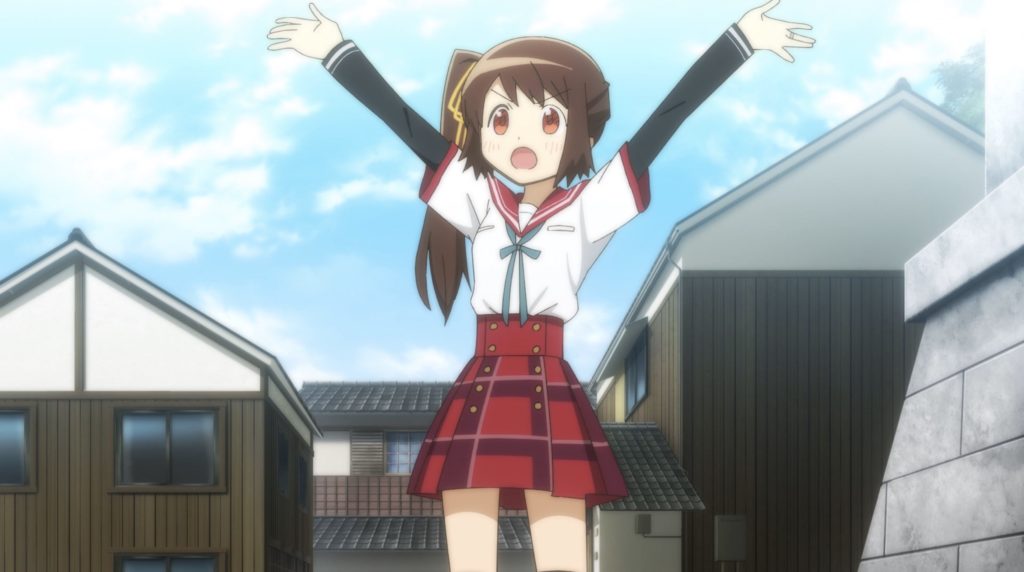 The latter issue is one the episode does occasionally fall victim to at times. Tsuruno’s intro is a little long, for example, with a lot of time spent in the restaurant she runs which overstays its welcome. Yet the ever-unique shot composition and imagery of the show prevent this becoming an issue throughout episode 4, while the actual exposition only helped to deepen the world of Magia Record as a whole. Much of the dialogue ties Mami Tomoe’s concerns raised at the end of the last episode in her surprise appearance to the Chain Witch and strange goings-on in Kamihama City, more tightly interweaving these fragmented events and characters into a single larger whole.

Perhaps most importantly, for the first time, the series has succeeded at making the unusual disappearance of Ui interesting by more directly linking her disappearance to the rumors, Chain Witch and the fabric of the city itself. Until now, the setting had been easily the more engrossing element of the series so far, to the point where I was concerned the series could fall apart if they failed to emphasize Ui’s story more in the coming weeks. Now, I’m less concerned, and the final moments of this week’s episode left me eager to potentially learn more about her fate, a first for me during the series so far.

‘Witch of the Week’ Feature Dilutes Their Impact 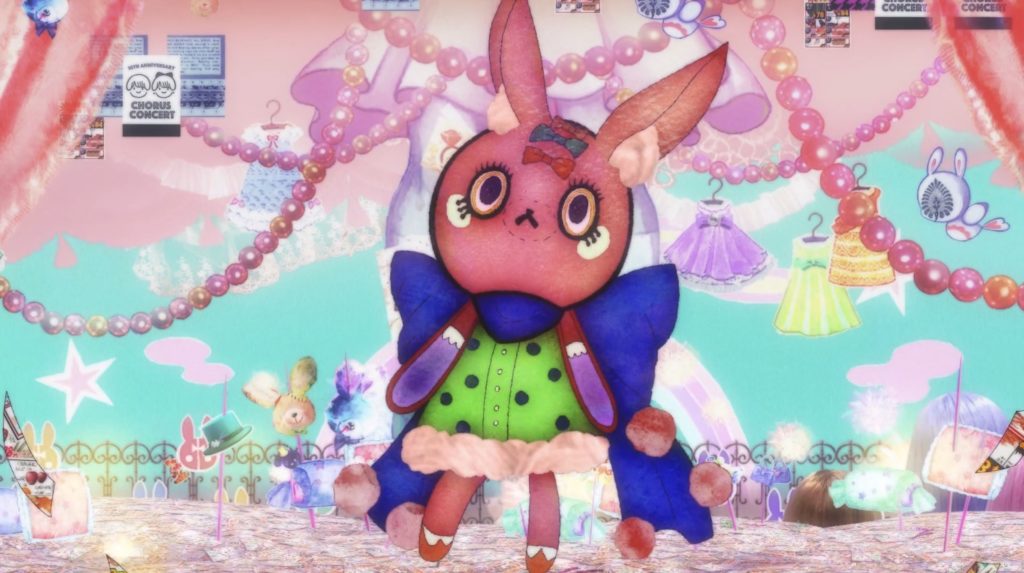 That’s not to say Magia Record episode 4 is perfect. As noted, the episode can occasionally feel padded, and this isn’t just limited to the odd conversation being a little longer than necessary. The roots of the mobile game once again raise their head here, as the tension built up throughout the episode is almost completely dissipated by the unnecessary interruption of a Witch.

I mentioned this before when reviewing episode 2, but the thematic meaning behind each Witch’s existence which propelled the original series of Madoka Magica is one of this series’ most noticeable flaws. What once held impactful meaning is now reduced to a ‘Witch of the week’ battle showcase which reduces the threat and importance their presence can bring to the story, reducing them to mere filler content.

Without rhyme or reason, near the end of an episode which wasn’t pining for action, our trio finds themselves trapped in a Witch’s Labyrinth in a supermarket while shopping for food. Worse, the Witch is a pushover, soon defeated in less than 2 minutes. 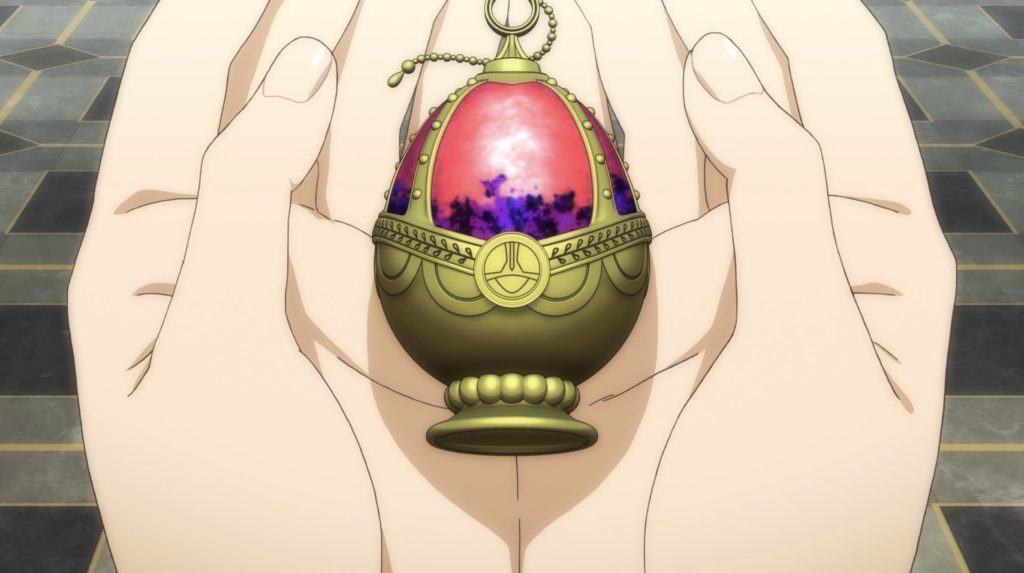 The witch doesn’t propel the story forward, it doesn’t develop our characters, it has no importance to the events of Magia Record episode 4 or the series as a whole. It simply… exists. It helps pad the episode out to the required runtime, sure, yet for the first time, its service as an interruption and not an addition to the events going on left me struggling to appreciate the always-pretty aesthetic a Witch’s Labyrinth brings to the table.

Less is more, and my appreciation almost turned to frustration as I watched this scene. The episode as a whole would have been much improved by its removal.

That aside, Magia Record episode 4 was an entertaining episode that disavowed the higher stakes and faster pace of previous episodes for a slow-burning exposition dump which excited through striking visual imagery and drops of information which finally left me with a reason to care about Ui’s disappearance. 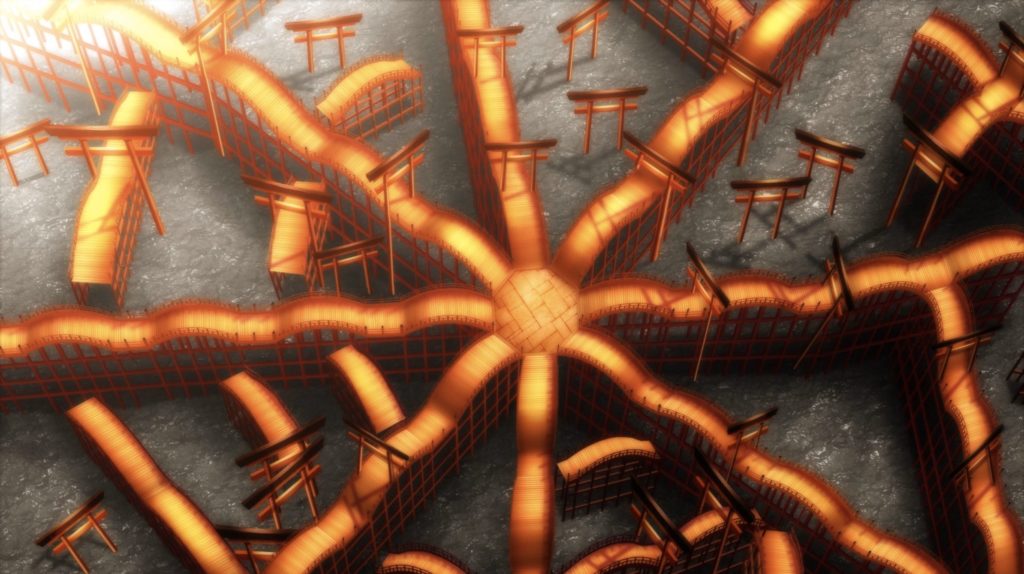 That last point is perhaps the most important thing to come out of this episode. Not only is it a necessity considering how much next week’s episode looks set to further explore Ui’s disappearance as the result’s of this rumor comes into play, but for a series driven by this storyline, it’s a necessity in order to ensure the series can sustain itself beyond its location.

This isn’t Magia Record’s strongest episode to date, yet it’s perhaps the series’ most necessary, as episode 4 establishes key ideas for the show to explore in the weeks to come. Personally, I can’t wait to find out more.