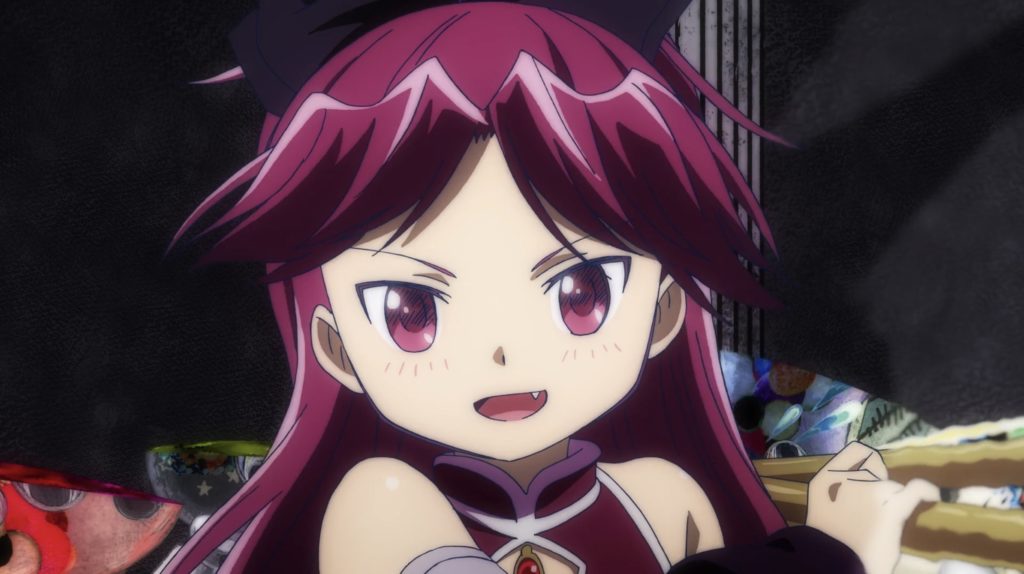 Even if I found last week’s meandering episode of Magia Record to be the weakest of the series so far, the final moments left me with an abundance of questions and an agonizing wait for episode 7 to premiere. After all, the episode finally lifted the veil behind what’s causing the mysterious Witch-like creatures, the Uwasa, to appear within Kamihama City, and the rumors surrounding the Chain Witch. Not only that, there appears to be more going on behind the scenes than initially thought.

The episode concluded with the knowledge that a group of magical girls had been working to defend the Uwasas in the service of a being known as Magius. The reward for this work? The destruction of the Witches which haunt the lives of Iroha and her friends every day and whom they must fight daily to survive. A scene enhanced by a chilling shot of Felicia as she switched sides to join them and some stunning art direction, this scene almost made up for the messiness of the episode up until that point.

With such a massive reveal at the end of last week’s episode, the question was whether Magia Record episode 7 could follow up on this tantalizing conclusion and answer the many questions left by this reveal. The answer? Well… it’s complicated. 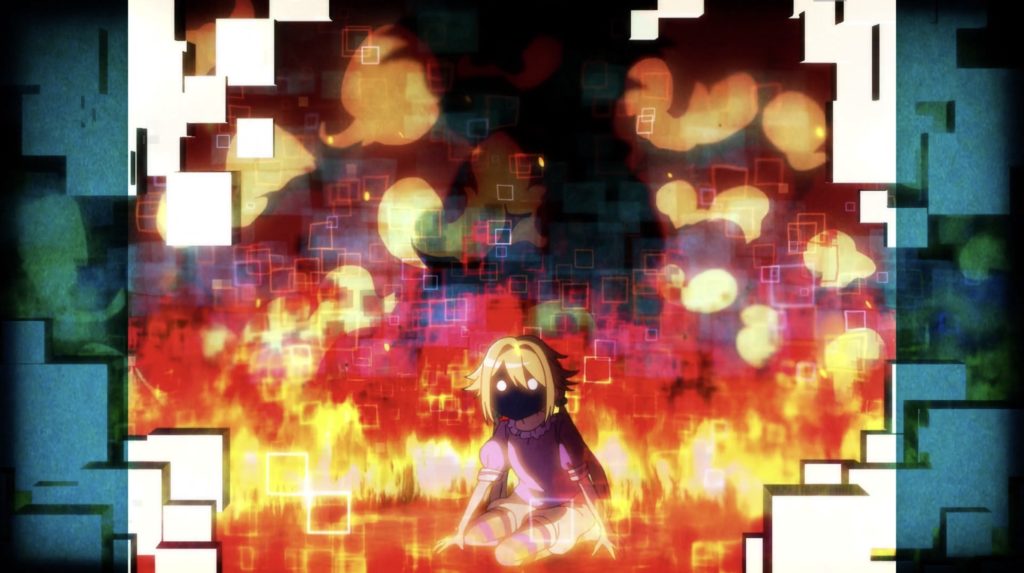 To move forward to the future, you first need to confront the past.

With that in mind, Magia Record episode 7 starts by taking us back to the moment of her parent’s death. As the flames burned her apartment and she was left on the floor in inconsolable tears, we see how the Witches had been responsible for the accident. Of course, Kyubey was on hand to conveniently explain this to her, as well. It’s only brief, but it gives context to their comments and even immediately answers some of the hanging questions about the betrayal.

Not only does this showcase her trauma, it only further proves how emotionally volatile Felicia is as a character. We’ve seen her quick to anger, yet seeing her moment of vulnerability immediately weaponized by Kyubey in the same way as we saw with the Wings of the Magius only serves to show how childish and, well, broken, she has become because of their death.

It’s a powerful moment, and it’s a shame the rest of the episode never hits the same level of introspection as this brief pre-credits scene.

Wings of the Highly Suspicious 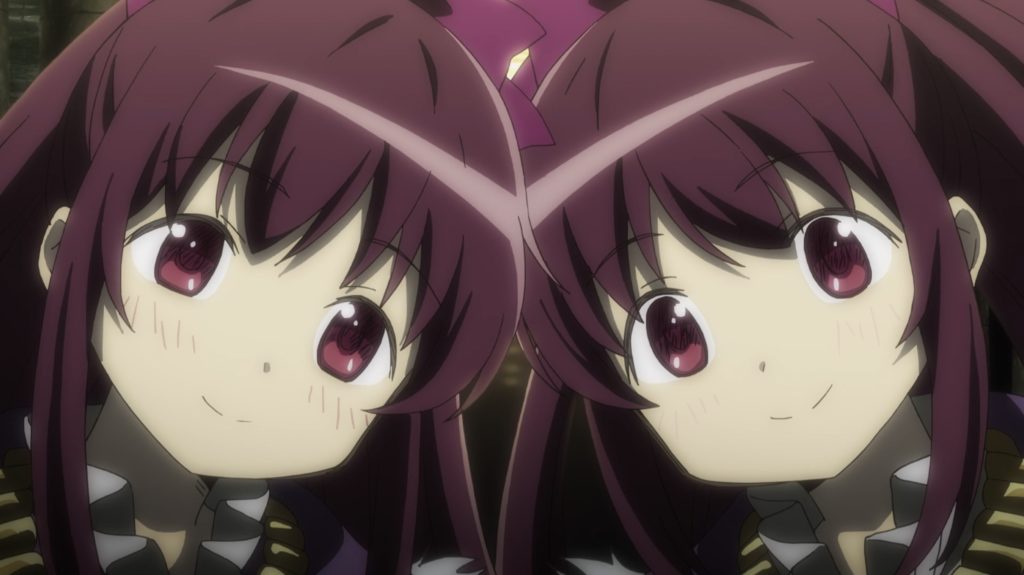 Episode 7 of Magia Record serves two purposes, one being to explore Felicia and the other being to explore the Wings of the Magius. While last week saw us vaguely introduced to the Black Feathers of the group at the end of the episode, this episode we meet the White Feathers, sisters Tsukasa and Tsukuyo Ayame, for the first time.

While not the Magius themselves, they essentially serve as leaders and a visual reference for an antagonist for most of the episode. Since early on, going right back to the rumors of the Friendship Ending Staircase, it was clear some higher power was involved linking these rumors, Iroha’s sister Ui’s disappearance and the magical girl’s salvation together, and the Wings of the Magius gives form to this without giving much away.

Their issue is that they can’t hide being so obviously evil, to the point that the events which follow are just as predictable as they are a little disappointing. 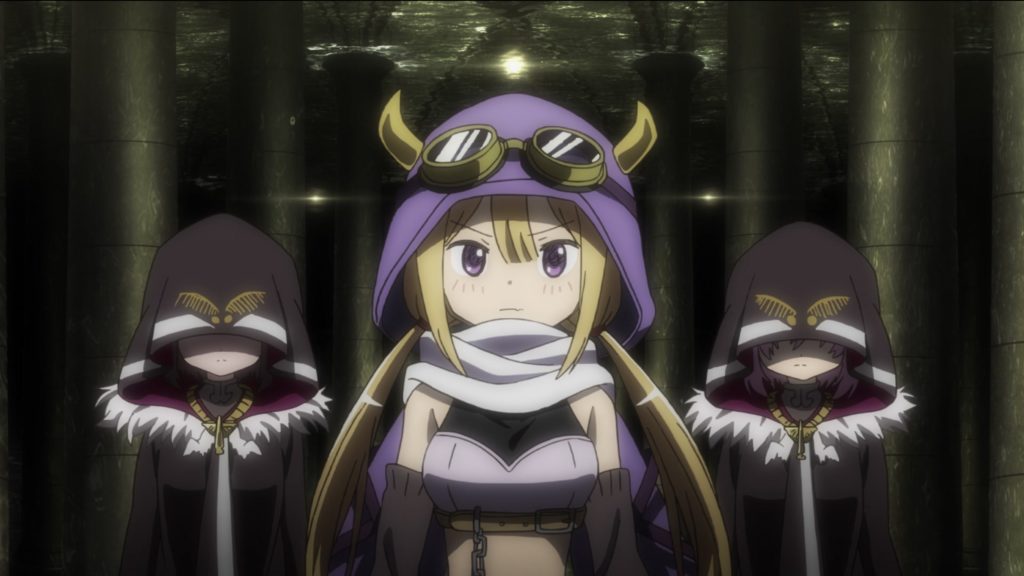 These sisters are inherently suspicious. They speak in riddles, they’re overly friendly, and their synchronized movements immediately indicate something is off about them. For a series which often hides its mystery in foreshadowing and layers of mystery, for a series which not only revels but excels when it can play with the audience and tease information in drips and drabs, this feels like out of place.

Perhaps that’s the point? Audiences know the Magius are the people opposed to Iroha and her friends, so why try and hide it? They’re cult leaders seeking to convert. At the same time, I can’t help but wish they were better-characterized and utilized, although maybe that will come later. 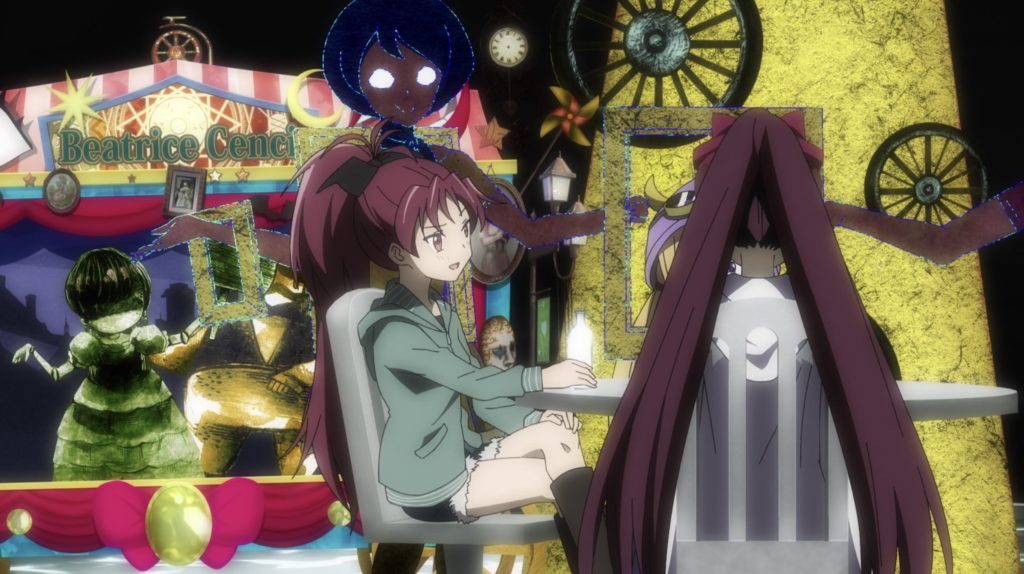 Considering their appearance mostly as fan service until this point, I didn’t expect Sakura Kyoko’s return, following brief appearances last week, to be such an integral and powerful element of Magia Record episode 7, providing some of the episode’s better moments. Her appearance feels much more impactful than that of Mami Tomoe previously.

Kyoko also joins the Magius having watched on from afar, but their entrance isn’t due to conversion to the Magius doctrine. They serve a role. What would otherwise be a contrived dialogue of Magius rhetoric clashing with Felicia’s more simple-minded desire to kill Witches is spiced up by Kyoko’s appearance as a spirit on their shoulder warning them to back away while they can. They’re never explicit, but they’re comments on the Lucky Water from last week and more is enough to sow the seeds of doubt which makes their moment of realization possible.

Kyoko’s involvement isn’t limited to acting as the voice of reason, though. As Felicia attempts to leave the group, Kyoko fights alongside her as well as Iroha and her friends, her character also serving as a crutch upon which the newer characters can learn and grow. 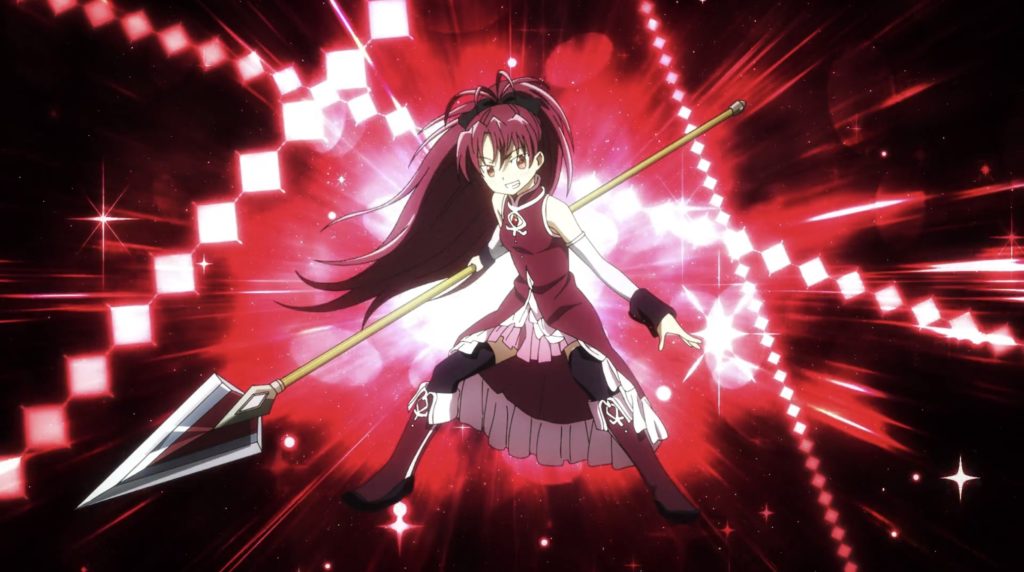 Thinking about her role in the original series, her character development centered on finding her purpose as a magical girl. She made a wish for her father’s sake who abandoned her once they learned the truth, leaving her alone and needing a reason to carry on. Felicia could be argued to be a mirror image of Kyoko, with their partnership in episode 7 exposing this reality.

However, this would be an unfair comparison. While they hold their similarities as hot-headed individuals with family tragedy, Felicia is yet to overcome her problems and is easily swayed by those around her because of it. She’s yet to move on and face the fact that they’re gone, replaying the memory over and over.

To move forward to the future, you first need to confront the past. 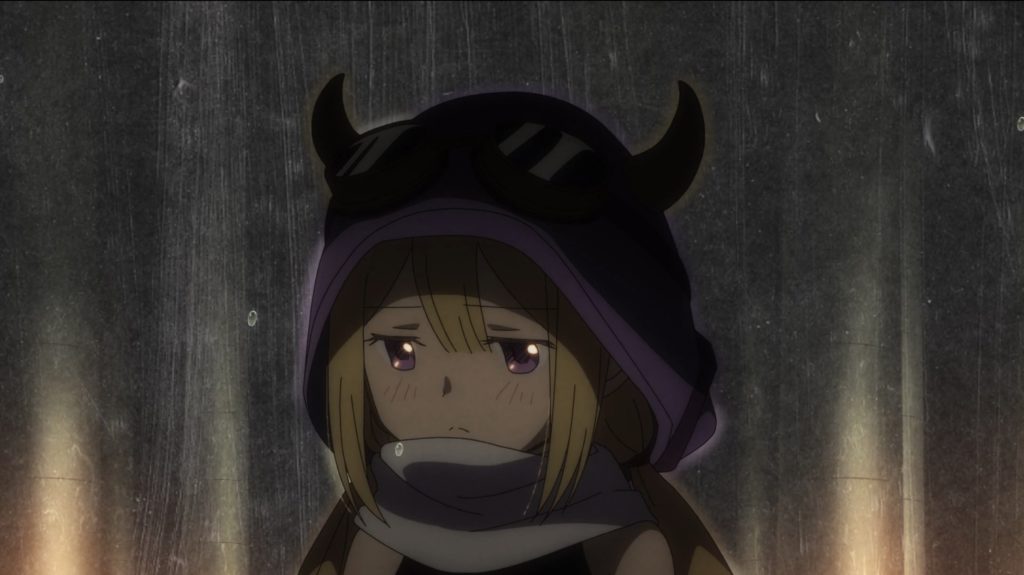 Kyoko serves as a model for her to aspire towards, and she takes this in her stride. Kyoko calls out to her to find a reason to be a magical girl which benefits her, gives her her reason to live and keep going, and it changes her outlook as a result because they stand united together. Her role in the episode is more than the fanservice it easily could have resorted to.

This is the most emotionally resonant moment of the episode and only becomes more powerful in retrospect once the battle is over, as her new outlook on life becomes so overpowering she breaks down on the floor. You can’t help but feel sympathetic as she lies on the floor in tears, unable to put her feelings into words.

Magia Record Episode 7: To Move Forward to the Future, You First Need to Confront the Past 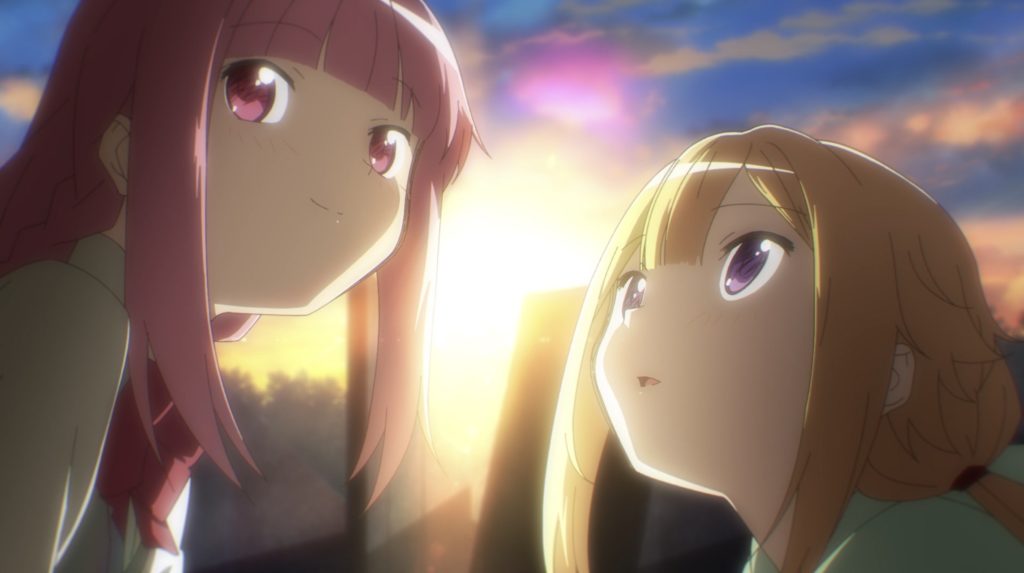 In the end, though, Magia Record episode 7 is a surprisingly simplistic episode within not just the context of this series but the franchise as a whole. We learnt more about the group teased during last week’s finale and the mystery behind the series’ overarching narrative, yet still returns to the status quo that held strong before last week’s cliffhanger.

Saying that Kyoko’s role within the episode is the thing which saves me from writing a much harsher review of the episode than I have. She gives a straightforward episode flair and makes her presence felt beyond tokenism by involving herself in the Wings of the Magius and Felicia’s problems. She acts as an experienced senior passing on her knowledge, a dynamic without a real parallel in the series so far, and even if we know she won’t stick around, her brief appearance here is welcome.

The simplicity can’t be ignored, however. Even visually, the designs of the Witches and the overall framing of expository scenes feel standard for the series. However, at this point in the series’ run, we were stuck with many more questions than answers and needed to learn more about the truth to what was going on, and that’s what this episode provides.

I wish it was less simplistic and more exciting, but it’s a serviceable episode with just enough left over to leave me excited for the next episode.