Magia Record Episode 8 Impressions: The Calm After the Storm 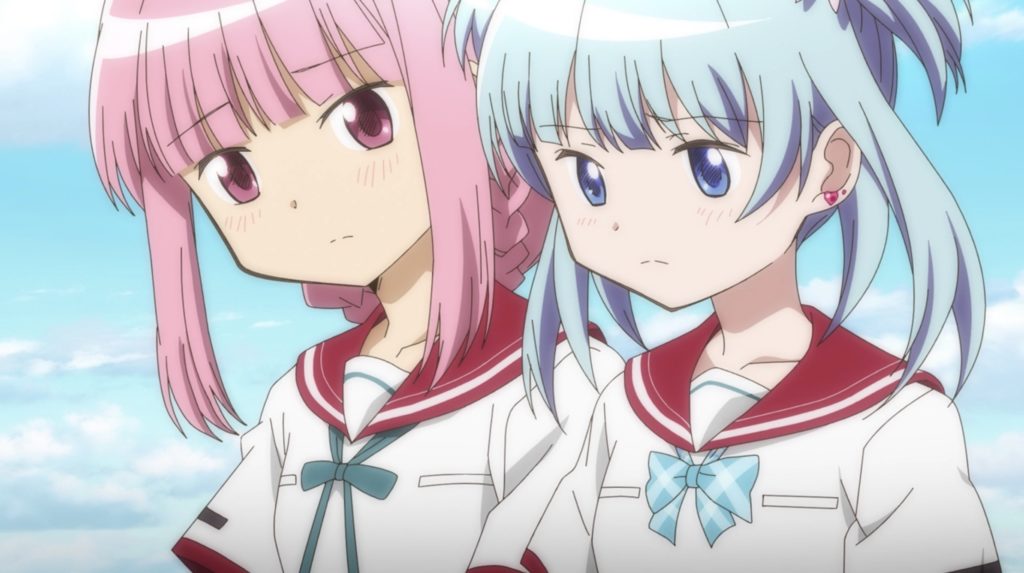 Last week was an episode of establishing new norms and asking new questions. We now know about the Wings of the Magius, their goals to work with Magius and the Uwasa to free Kamihama City of Witches, and we have our main characters working together, living under the same roof. Yet the post-credits tease left mysterious unknown messages being sent to Iroha’s phone, alongside the more pressing question of why the Wings of the Magius were working with a magical girl’s sworn enemy and how they should, or should they, be stopped. That’s where Magia Record episode 8 comes in.

Episode 8, despite being rather dense on exposition, doesn’t answer many, or even half, of the questions the last episode of Magia Record established. In fact, it asks more questions than it answers and has a rather slow pace overall, a potential cause for concern with the series supposedly concluding (at least for now) at in just over a month. Despite that, I was left intrigued, and the questions it did choose to answer coupled with the superbly-animated sequence near the episode’s climax do enough to keep me firmly engaged in this season’s rapidly-expanding and ever-mysterious story.

I Heard a Rumor About a Rumor… 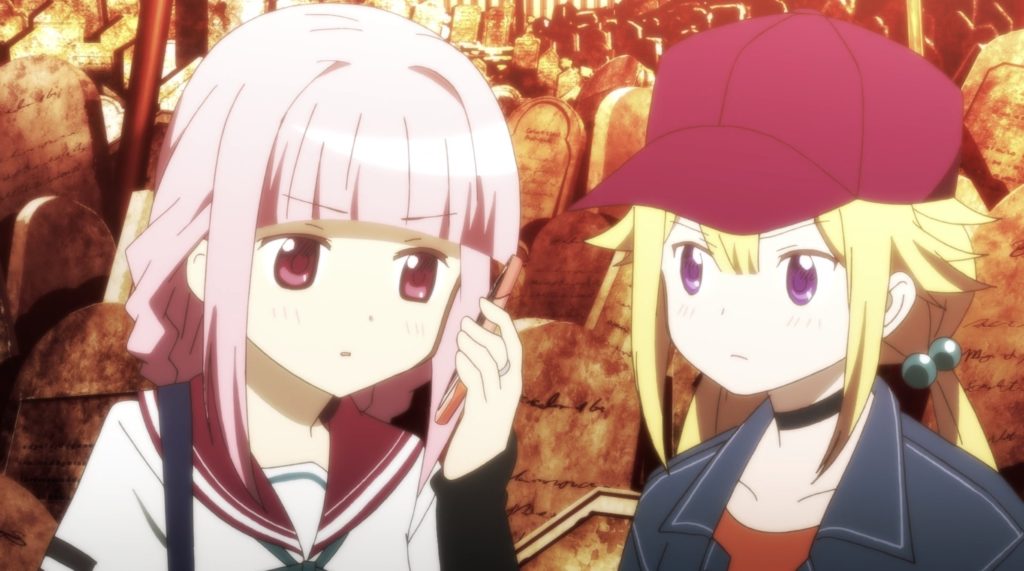 When I say Magia Record episode 8 raises more questions than it answers, it comes from the number of new rumors the episode introduces. At this point, having determined that Kamihama City is the key to understanding the truth behind her sister’s disappearance, Iroha has moved in with Yachiyo and transferred to the same school as the other magical girls. Her reasoning for this decision is that she could learn about many of the new rumors and the dynamic of the city by living there, hopefully drawing her closer to finding the truth.

Rather quickly she learns about new rumors on her very first day, but it can almost feel like a bit much for the audience with how much it throws at you. You have the Invisible Girl rumor, for starters. The Invisible Girl is someone no-one ever really noticed, only giving a vague smile when addressed by others. Over time people chose to ignore her, and this made her increasingly transparent until she was invisible. Then you have Endless Solitude. There’s a post online saying you shouldn’t approach it no matter what, but little details are ever addressed aside from that. 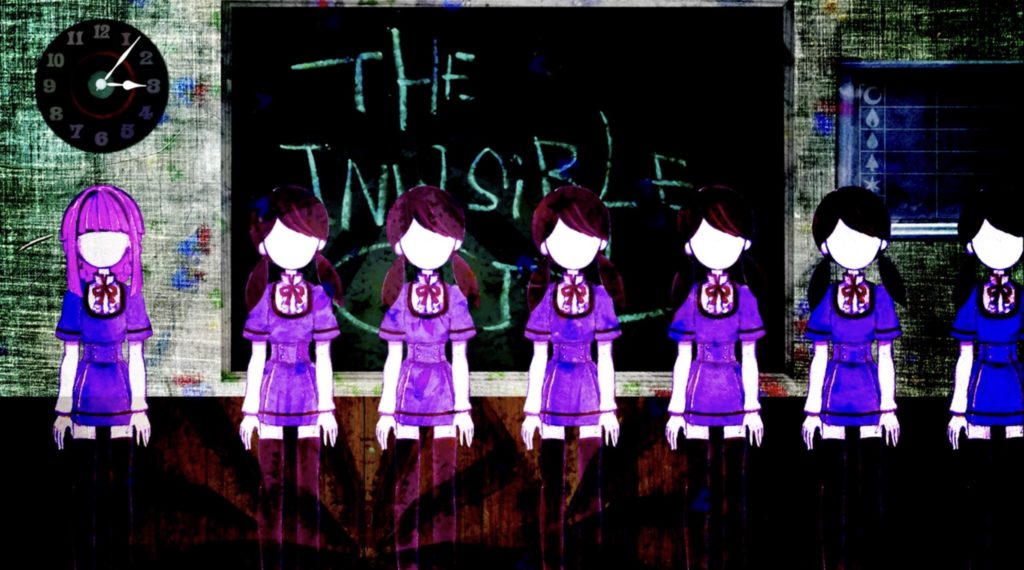 On top of both of these, you have the rumors about the city’s radio tower, regarding the Electric Wave Girl. Here, it is said that if you stand underneath the large broadcast tower in Kamihama City with your phone to your ear, you can hear the voice of a girl crying for help through your phone’s receiver.

This ends up feeling like an unnecessarily large amount of exposition, especially when these rumors mostly aren’t even touched upon within this week’s episode. You have the broadcast tower which is relevant to the story’s climax, and there are some allusions between the story of the Invisible Girl while what is happening to Iroha as she is shunned by fellow students at her new school. This latter point is a stretch, and Endless Solitude is a rumor which only returns by name only for this week’s cliffhanger ending. We receive explanations of how the rumors work, but we never see any of them explored or see the Uwasa behind them pulling the strings. 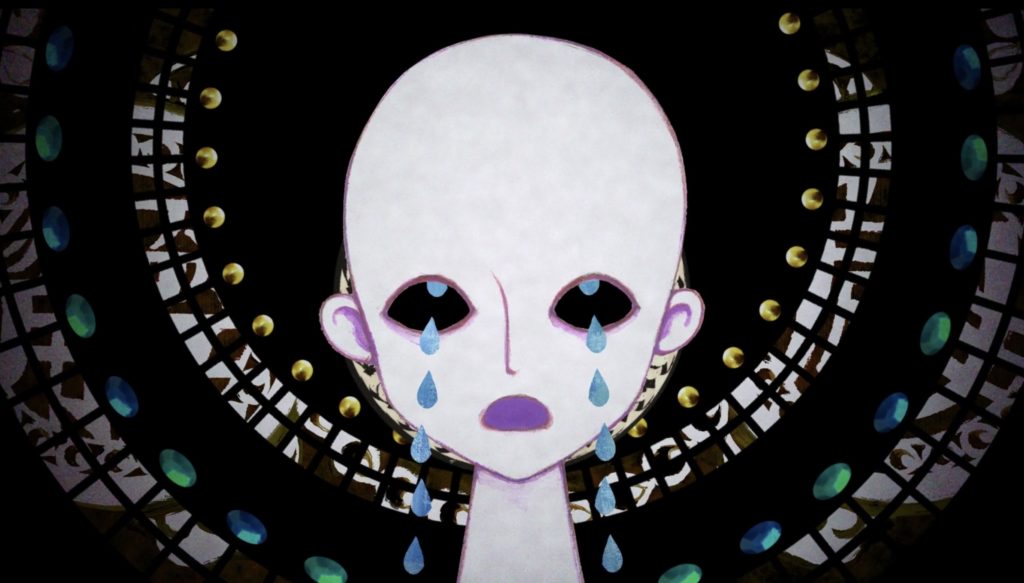 Even ignoring their contribution to the plot, it can feel like an overload of information as we learn about 3 rumors when previously a single rumor would be given 2 episodes for exploration and development. The Invisible Girl, had it been handled earlier in the series like the Friendship-Ending Staircase, would’ve likely seen one of our characters completely fade from visibility before being forced to either confront them alone or get the attention of the others for help through other means. While I’m not saying I would want this structured repeated, surely there’s a balance which advances the plot while avoiding this information overload.

If I’m honest, I actually forgot some specifics of these rumors due to how many were introduced one after the other, and no matter how visually impressive they make these explanations, they blend into one when you have to consume multiple rumors one after another. 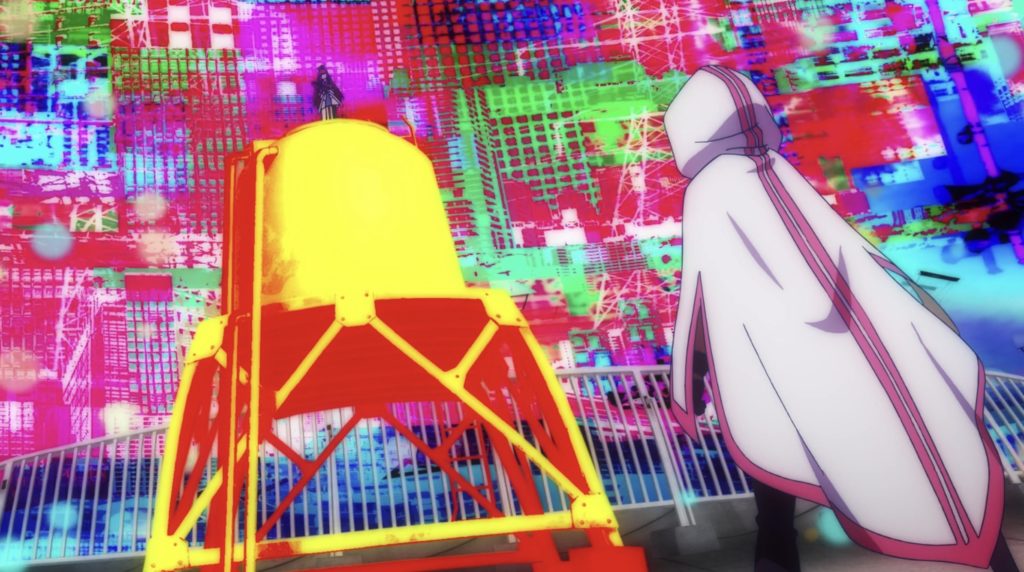 Unlike other exposition-heavy episodes of the series so far, however, Magia Record episode 8 at least remains interesting throughout. If last week’s episode was visually not very exciting, this was the opposite. If other exposition-heavy episodes felt like they did unnecessary things to pad the runtime, this didn’t, with every moment touching on concepts for the episode or the future. I can complain about whether the exposition was too heavy in this episode and whether less relevant points could have been explained later, but I can’t say that I felt my time was being wasted.

Reaching the end of the episode, exploring the rumor of the Electric Wave Girl, we touch base with the Wings of the Magius and have a short fight sequence which is not only one of the more impressive of the series so far but also ramps up the intrigue for next week’s episode. Unsurprisingly, they’re also pulling the strings here, as Iroha runs into them at the tower.

This fight has everything I feel is necessary not only to be an enjoyable watch but to advance the plot and retain engagement and keep viewers wanting more. We tease answers to some of the episode’s long-set-up mysteries (the spam mail sent to Iroha may be another magical girl the Wings of the Magius are familiar with), we add intrigue from returning characters hanging overhead (we see the silhouette of Mami suggesting she’s still curious about what’s going on in the city) and we have some impressive cuts of animation to punctuate the battle with the Witch. 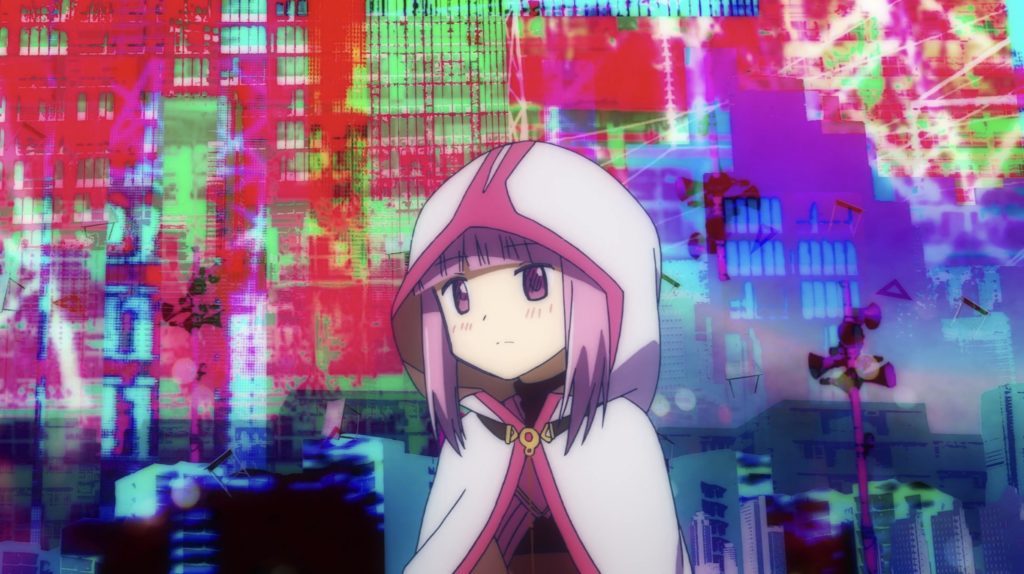 There are two particular moments that stand out on the animation front, and I wish I could identify the animators responsible for these particular cuts so I could mention them here by name. The first, occurring as Iroha inquires to the Wings of the Magius member about what the group does, sees Iroha skilfully dodge flying projectiles, flipping off of the explosions and jumping on to rails to get away, all while a dynamic camera changes perspective and follows Iroha. There’s another equally impressive cut immediately following it too.

All of this ignores an earlier scene giving further backstory to Iroha’s sister Ui. Episode 8 of Magia Record is a successful attempt to switch things up and attempt to directly tackle the new antagonists, the Wings of the Magius, while further exploring long-held mysteries with Ui and tying it all together as we enter a key moment for the series in the coming weeks. 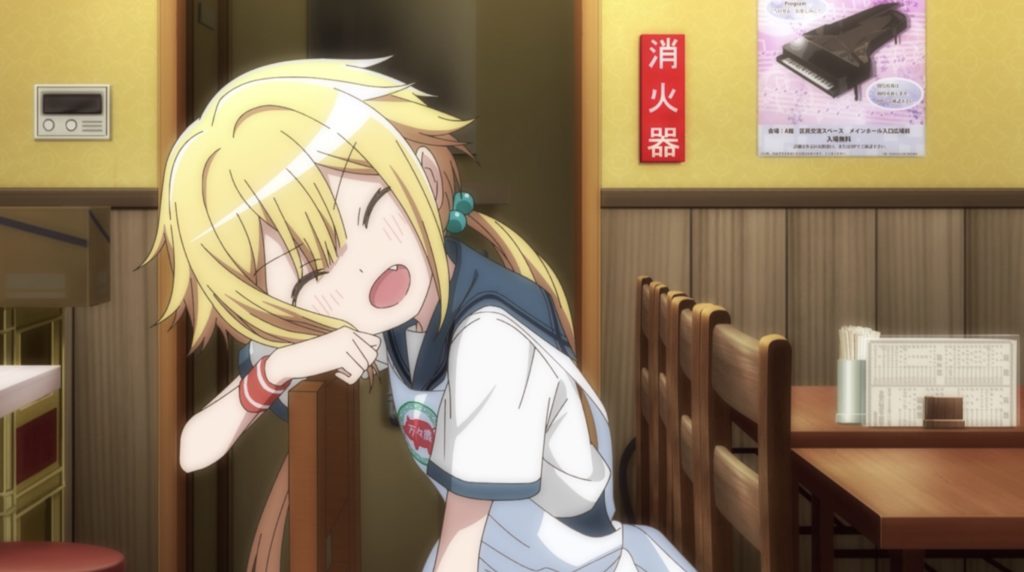 Not every episode can be a high-stakes conveyer belt of answers on a scene-by-scene basis. Ignoring the fact you want to leave some mysteries out in the open, it would simply be too exhausting in the same way an overload of exposition, an issue this episode occasionally falls into, would cause viewers to switch off and not pay attention to important pieces of explanatory dialogue.

Saying that, other times the series has slowed things down to deal with exposition, it’s often felt like filler and missed the mark. In episode 8 of Magia Record, while still not a perfect example by any stretch, I feel a balance has been reached between expository scene-setting and story progression. The episode-ending action sequence is not only impressive to watch but further compliments the story in a way some Witch-of-the-week episodes in previous weeks have felt at-times phoned in.

This is an exposition-heavy episode done right, and with a cliffhanger such as the one at the end of this week’s episode where they finally respond to the spam messages before the title card, ‘You Definitely Shouldn’t Respond’, appears, has me intrigued. With a newfound focus from last week’s Wings of the Magius reveal, I’m on board for whatever direction this series is heading in the remaining weeks.