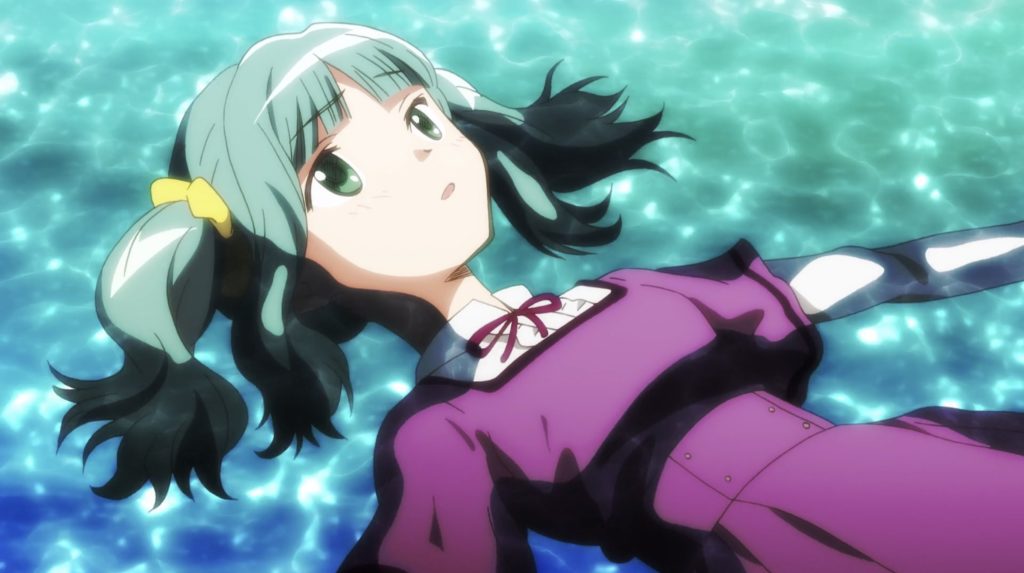 Despite continuing right where last week’s cliffhanger tantalizingly left audiences waiting, Magia Record episode 9 is, for all intents and purposes, a self-contained story with seemingly little consequence to the overarching story.

I say this in the most positive terms. This episode feels mostly isolated from the larger plot regarding Iroha’s search for Ui, the Uwasa, the Wings of the Magius or, indeed, any hanging plot threads bar a reference to their existence, all so it can focus on telling a more personal, small-scale story of self-worth and inner strength which is one of the strongest of the series to date.

Taking some of the unanswered rumors from last week and expanding upon them within this story, we have an episode which encapsulates the theme Madoka has attempted to explore since the original series’ debut in 2011, and it’s a wonderful change of pace ahead of a likely-heavy set of episodes heading towards the season finale. 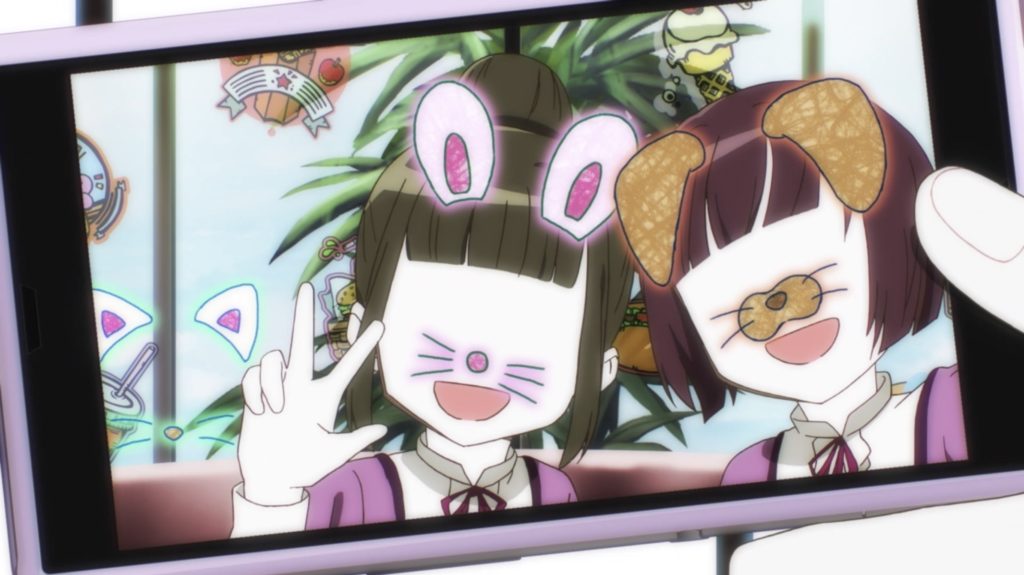 To get the negative points out of the way first, the episode starts rather slowly. Last week, I took issue with how a lot of time was spent rushing through an explanation for a slew of rumors which were never addressed during the episode, filling space and overloading audiences with information. Compounding this, episode 9 of Magia Record begins by recapping these rumors, while also finally explaining the Endless Solitude rumor mentioned in last week’s cliffhanger yet left unexplained during the episode itself.

This is a wonderful scene to look at, for sure, with silhouette static shots, layered frames and more employed to bring audiences up to speed. The issue is that it feels like repetition when they talk about the Invisible Girl and gives too much away of the episode’s central concept away by over-explaining the Endless Solitude while our main characters remain oblivious to the truth.

However, even I have to admit I’m nitpicking with these complaints, and have very little to complain about once the episode truly begins after the opening credits.

Returning to the cafe, we learn some surprising pieces of information: the sender of these messages is an Uwasa, one with a death wish that no longer wants to hurt magical girls. It completely upends the established dynamic of Uwasa as faceless creatures not dissimilar to witches in need of destruction, giving everyone and the audience pause for thought.

Following this, to the episode’s benefit, our main cast of characters are almost completely disregarded until the closing moments. Futaba Sana, the girl trapped in the Endless Solitude, becomes the new central force for the episode as we re-examine the rules of the world of the Madoka Magica universe and the themes the series has explored since the beginning.

As I’ve said before, one of the things the Madoka Magica series has sought to explore since its inception is the idea of magical girls being powerful, inspirational figures who instill hope in others through their self-belief and power to defeat evil. This is an idea at the core of the magical girl genre, yet the Madoka series stands out by exploring these themes from a new perspective. 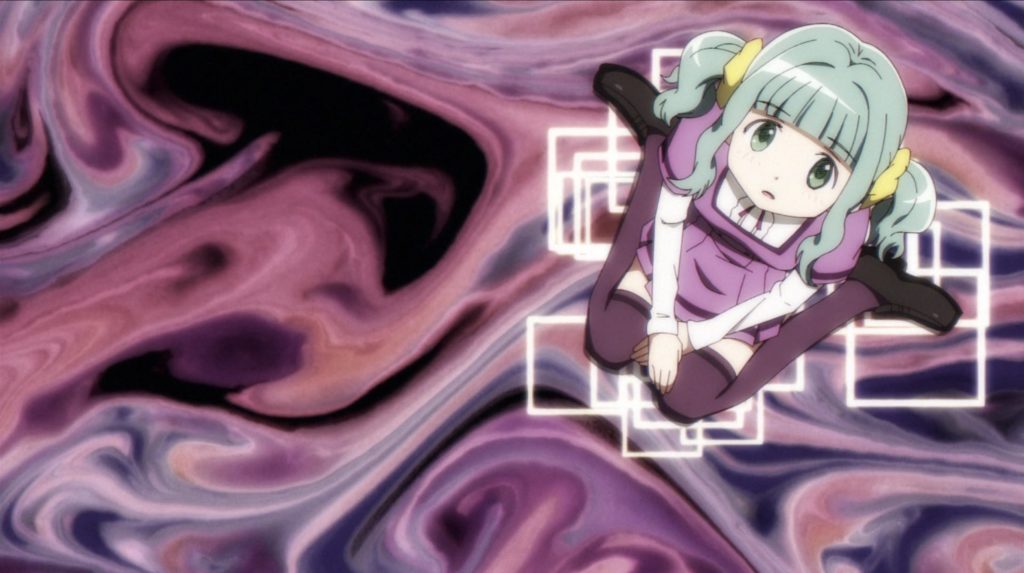 Their strength and willingness to save others are often employed by shows within the genre as being the core of a character’s inner strength and the reason they can triumph over whatever stands in their way and save those who may have lost hope in themselves and the world around them. Yet, if magical girls are representative of hope and salvation, where do they turn to without such figures to look up to themselves?

This is an idea the series has explored both through Magia Record and the original series, and episode 9 introduces a third way to explore this question. If a magical girl is born and is representative not of hope and salvation but despair and hopelessness, how can they save others, and how can they turn their lives around for the sake of themselves and others?

Through flashbacks, we learn Futaba Sana willingly entered the Endless Solitude of their own accord. Always low on self-confidence, she uses her wish to become invisible, a wish misinterpreted by Kyubey which leaves her essentially dead to the world around her. With no one around to contact, the idea of the Endless Solitude is suddenly welcoming, inviting, and jumping in becomes less a decision to defeat the Uwasa controlling it but a search for a place to call home. 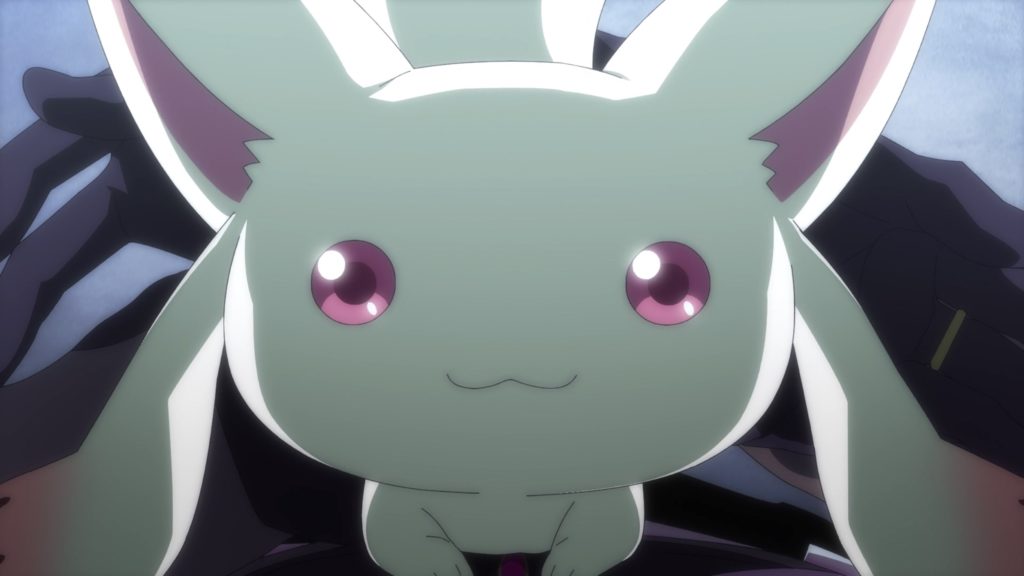 The Endless Solitude is controlled by a failed AI locked in the tower by its creators. They hold one person who jumps from the radio tower’s roof prisoner till the next person jumps in, at which point they’re released. Usually, when someone falls in they cry for help and seek a way to escape (hence the Electric Wave Girl rumor from last week), but for Futaba Sana, she finally has someone who acknowledges them and can see them for the first time in forever.

They become friends and play games together. They talk, Futaba gives the AI a name (Ai), and we both characters, abandoned by the world around them, find love and comfort in each other’s presence. In turn, they give each other the hope that they had lost through isolation and find a reason to live and keep going in each other, as well as something worth protecting. In a sense, Futaba became a magical girl only after she gave it up by jumping into the Endless Solitude. 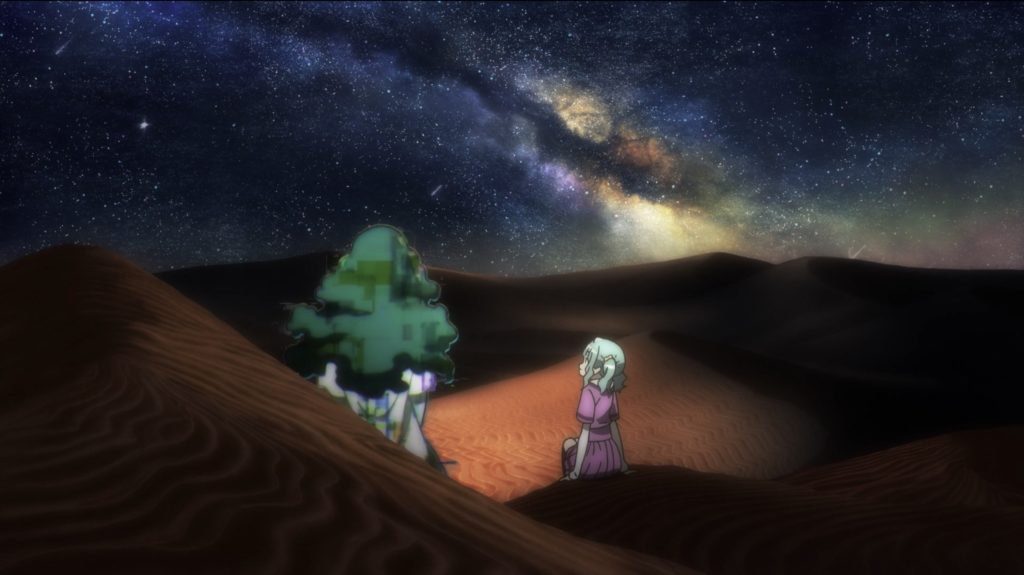 With little importance to the overarching plot, we see these two characters become close to one another and we see the core themes of the series explored in a way that’s been lost in service of an interesting yet unwieldy overarching plot in need of answers over the past few weeks.

I prefer this story being mostly-self contained, and even the episode’s finale, which links the events of the episode to the wider conflict and introduces a new antagonist from within the Wings of the Magius, doesn’t take away from how focused the episode is in exploring the series’ central themes versus the overarching story.

Near the end of episode 9 of Magia Record, we’re introduced to another of the ringleaders within the Wings of the Magius, Alina Gray. With AI in danger after she asked to be killed by Iroha to protect Futaba, they enter the labyrinth to scupper these plans, defeating the other magical girls to ensure the Uwasa continues to evolve and contribute to their grand plan. 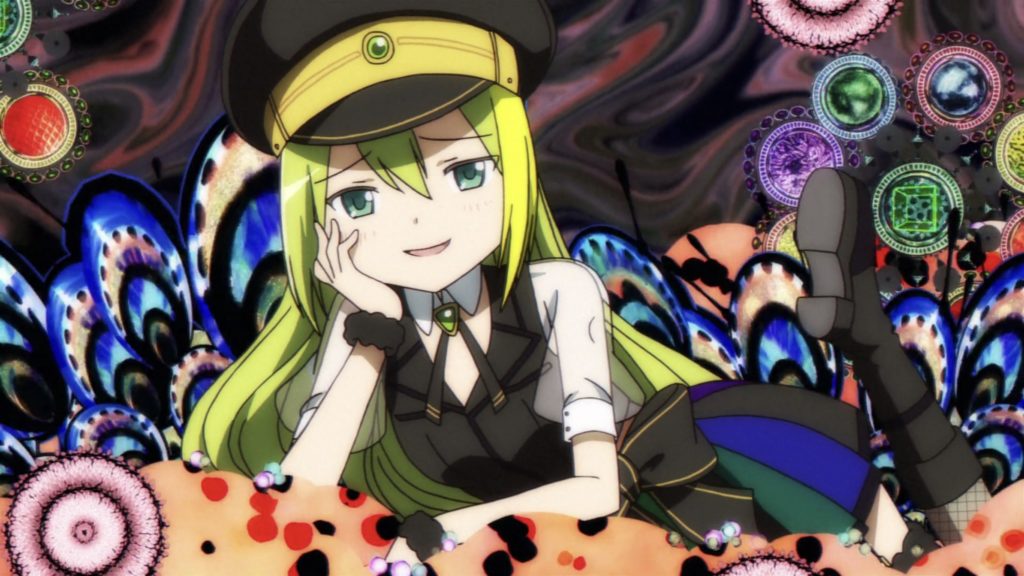 It gives this final fight a new feel to those which came before it since there’s no simple good vs evil dynamic defining the rules of conflict. Both Futaba and Alina want to protect AI, but Alina wants to destroy Futaba and Iroha, while AI will do whatever they can to protect Futaba’s life. It leaves you second-guessing much more than normal and adding to the excitement of an action scene otherwise rather short and uneventful. In fact, without this dynamic, I’d almost call it unnecessary, as we learn very little about Alina or the Wings of the Magius in the process.

With a conclusion that sees the Endless Solitude come to an end at the cost of AI’s life, who now lives on within a reinvigorated Futaba, we see the concepts the episode sought to explore reach a natural conclusion.

If a magical girl is born and is representative not of hope and salvation but despair and hopelessness, how can they save others? By finding new hope. 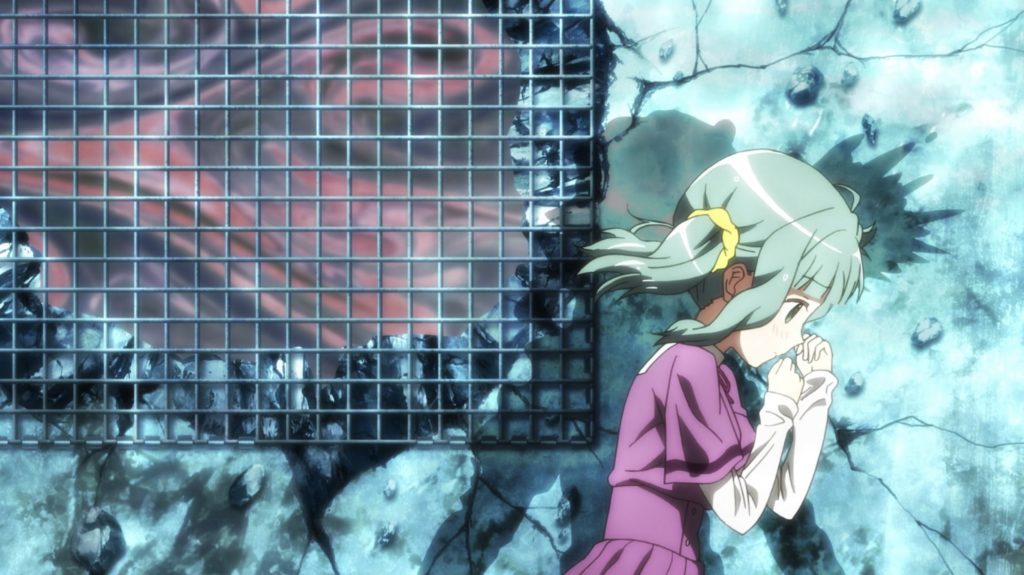 Episode 9 of Magia Record may lack little importance to the overarching story, to the point where it could be seen as filler to give audiences a break after the major revelation regarding the Wings of the Magius’ existence in episode 7, yet it’s perhaps one of my favorite episodes of the new series so far. This is an episode that may not advance the story, yet it succeeds in embodying what the series seeks to be, what sets it apart from its contemporaries within the genre.

Between all of this, I’ve yet to discuss how this episode is also one of the most visually-impressive episodes to date, a dedication to mood established through stunning landscape shots within Futaba’s flashbacks, the rumor explanations at the beginning of the episode and even the use of 4:3 aspect ratio while exploring Futaba’s wish to Kyubey.

It all comes together for an episode that left me emotionally invested in these characters I just met 20 minutes ago, even shedding a tear at the episode’s climax.

This is why I love the Madoka Magica series.