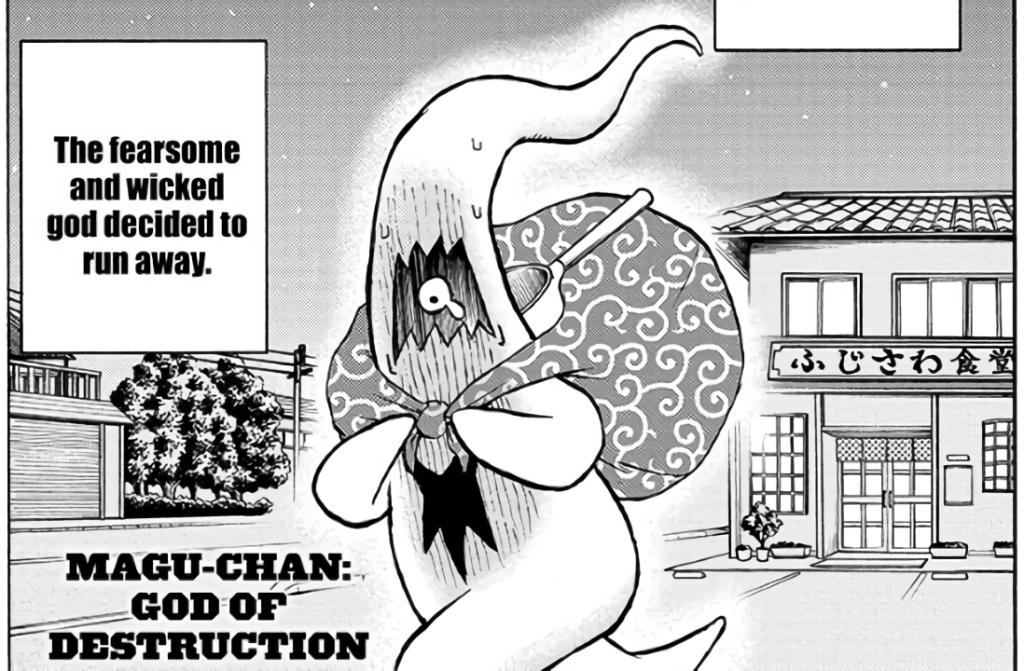 The beginning of a new week can only mean one thing: time for new Weekly Shonen Jump! This is where Jacob investigates the latest and greatest in the magazine, telling you what’s worth your time and what’s not. You can find coverage of other series under the tag Jump Time. Here’s Magu-chan: God of Destruction chapter 38.

When you’re constantly disrespected at the workplace, there’s only so much you can take before you call it quits. That’s exactly the kind of situation that Naputaaku the Mad faces in Magu-chan chapter 38: after being relegated to pot-washing duties once again during a busy night at the Fujiwara Eatery, he’s done. A night on the streets relying on the kindness of strangers, however, is enough to make him realize what he once had.

One of the best things about Magu-chan chapter 38 is how we get to see lots of different characters’ homes in a very short space of time: this gives them so much more personality and deepens our understanding somewhat of their home life. Yuika is the first to find him, collapsed in the street outside a pachinko parlor: she offers to put him up at her place, but he very quickly comes to regret taking that offer.

What’s worse than one hyperactive Yuika? Four of them! The problem child’s siblings prove too much for the God of Chaos to deal with, so he ends up going home with Kikyou, but even there, he can’t be at ease. An unsettling scene involving Gu La’s claws forces him out onto the street once again, where he encounters Izuma and Uneras: the situation repeats, eventually leading him to the Miyanagi household where Magu resides.

All of this excitement is enough to make Naputaaku miss his time at the Fujiwara Eatery, even if he was disrespected. He also remarks that his former lifestyle as an all-powerful god with servants waiting on him hand and foot would be ‘a bit boring,’ so when Ren comes to fetch him at the end of Magu-chan chapter 38, he’s more than willing to let bygones be bygones.

That just goes to show that, sometimes, it takes a change in circumstance to make you realize just how good you had it, but you never really appreciate what you have until it’s gone. Such is the folly of humans, and that also applies to primordial beings, if Magu-chan chapter 38 is anything to go by.

You can read Magu-chan chapter 38 for free via VIZ Media.