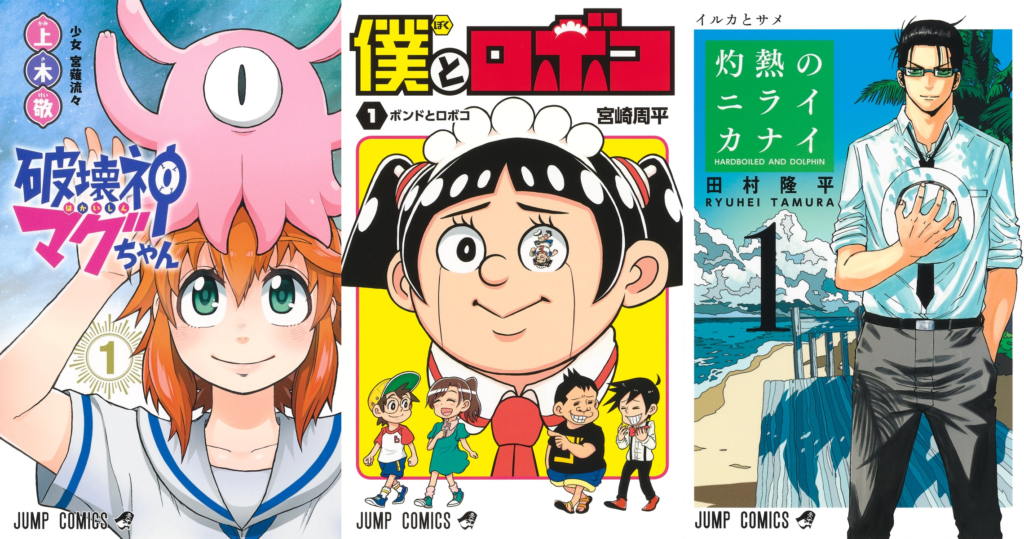 It’s that time of year again, where new Weekly Shonen Jump series face the test of a lifetime as their first collected volumes are thrown onto bookstore shelves. Last time, it was Moriking, Time Paradox Ghostwriter, and Bone Collection volume 1 staring down the prospect of cancelation; this time it is Magu-chan: God of Destruction, Hard-Boiled Cop and Dolphin, and Me & Roboco that must prove their worth in the form of sales. How did their debut volumes fair? Pretty well, actually.

Using the Shoseki ranking blog, we can get a rough estimate of how many units Magu-chan, Hard-Boiled Cop and Dolphin, and Me & Roboco volume 1 managed to shift in their first week of sales, not taking into account digital sales or sales from online stores and comic speciality shops. Without further ado, here are the figures from November 2 to 8: 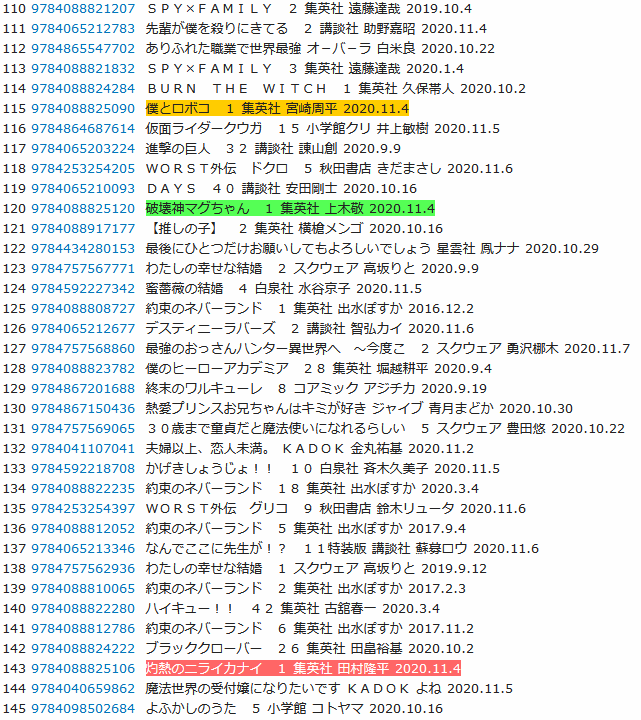 This is actually the first time that new Weekly Shonen Jump series have debuted in the top 200 for a good while, given that Moriking and Time Paradox Ghostwriter volume 1 debuted at number 265 and 223 respectively (Bone Collection volume 1 came in at 495, but we don’t talk about that).

Highlighted in orange is Me & Roboco volume 1 by Shuhei Miyazaki, which saw the best sales out of this current batch. Everything on Shoseki ranking is just an estimation, but the volume at number 100 is expected to sell at least 9350 units – given that Me & Roboco volume 1 comes in at number 115, we can expect it to have sold around 9000 units.

Coming in a close second is Magu-chan volume 1, ranking at number 120 in green. Again, this means its sales sit somewhere around 9000, a few units lower than Me & Roboco. This is interesting as the author, Kamiki Kei, is a completely new one with no prior work to his name – unlike Shuhei Miyazaki, who penned the Promised Neverland comedy spinoff Oyakusoku no Neverland (The Parodied Jokeland).

One theory that is going around is that Magu-chan provided the perfect cure for the pure misery of Chainsaw Man volume 9, which also debuted this week alongside Hard-Boiled Cop and Dolphin, Me & Roboco volume 1 etc. and just underneath Haikyu!!’s last volume at number 2. Yet, this is based on a handful of Amazon reviews, so we should take this with a grain of salt.

In any case, the sales performance of Ryuuhei Tamura’s return to the rankings with Hard-Boiled Cop and Dolphin volume 1 is comparatively a little disappointing. While number 143 in red is nothing to sniff at, it is significant that his series is the lowest of this current batch. Since the beginning, Cop and Dolphin has struggled to find a focus, and it doesn’t seem as if this has gone unnoticed by consumers. We’ll have to see how volume 2 fares, but it seems as if Tamura is safe from cancelation for now.

In fact, it seems as if all of these new Jump series are safe from cancelation, as all of these debut volumes have done fairly well in terms of sales. So, will the axe stay silent this time around? Probably.

We’ve already mentioned Chainsaw Man volume 9 and Haikyu!! volume 45, but it is worth noting that Dr. STONE volume 18 and Mission: Yozakura Family volume 5 have also done very well, coming in at number 5 and 71 respectively. Along with the sales success of Burn the Witch and Ayakashi Triangle, it seems as if the Weekly Shonen Jump line-up will remain free of casualties – for now.