Magu-chan: God of Destruction Combines the Arcane and the Mundane 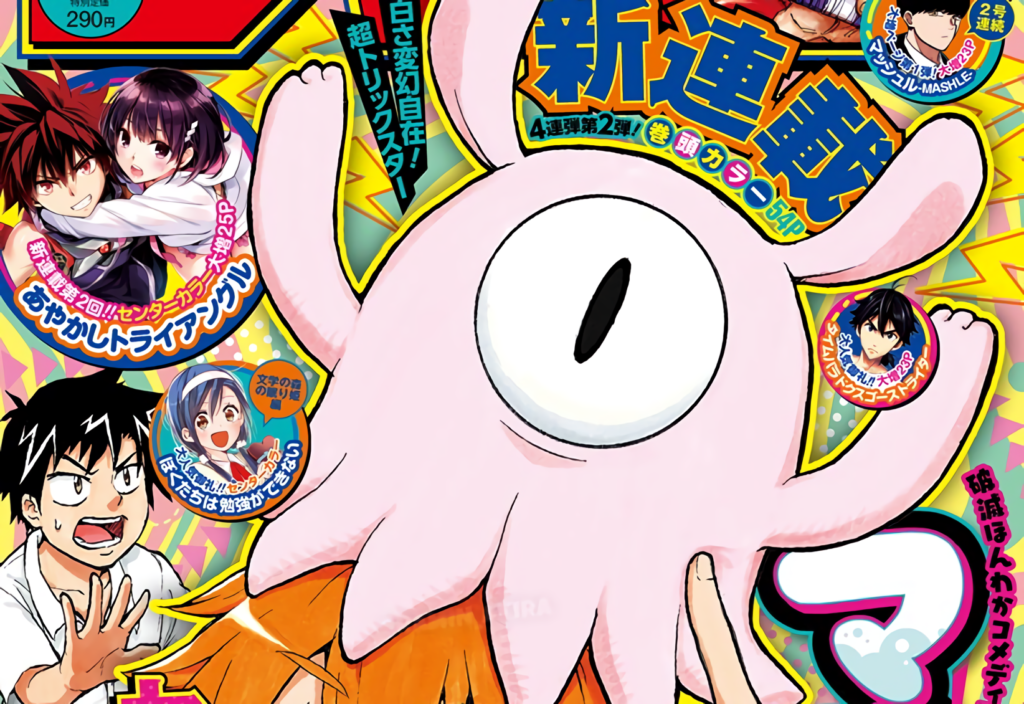 When Magu-chan: God of Destruction’s first collected volume was released in Japan, many people attributed its sales success to a matter of circumstance. Certainly, the fact that it was released alongside Chainsaw Man volume 9 meant that those who picked it up alongside Tatsuki Fujimoto’s latest were in the mood for some good old-fashioned fun, but attributing it to just that fact is far too simple. If that were the case, then people like me who read it weekly would not have come to like it so much!

In reality, Magu-chan is successful because it is good. Beyond an impressive debut volume performance, its second volume has also sold well, coming in at number 50 on the Shoseki estimations and selling around 10,000 copies. While that does pale in comparison to the likes of Jujutsu Kaisen or My Hero Academia, we have to remember that the bar is set much lower for new series and, indeed, comedic ones.

For those not in the know, Magu-chan follows the misadventures of the titular God of Destruction Magu Menueku and his ‘disciple,’ middle school student Ruru Miyanagi. After washing up in the rural Japanese countryside, Magu attempts to grow his follower base by getting them to sign the ‘Book of the Destruction Disciples’ Blood Oaths’, a childish ‘BFF book’ that Ruru gives him towards the beginning. It’s hilarious and one of the best series running in Weekly Shonen Jump right now. 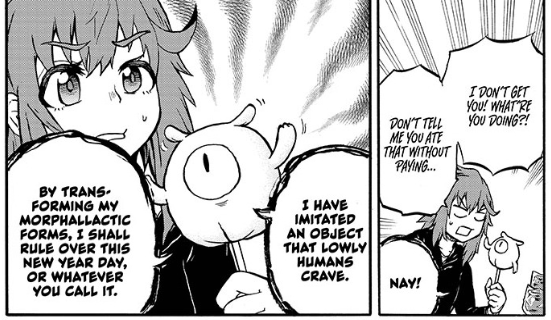 Magu-chan is good because it is well written. In particular, what constantly impresses me is series author Kamiki Kei’s command of characterization through dialogue, translated excellently into English by Christine Dashiell for VIZ Media’s Shonen Jump.

Take, for example, one of the situations in one of the series’ latest chapters, chapter 27. This chapter sees Magu and Ruru visit a traditional Japanese shrine to see in the New Year, and immediately sees Magu get up to no good: his true aim in coming to the shrine was to usurp the place of the ‘pathetic local god’ and demonstrate how powerful he, as an Eldritch being, is. He splits up into multiple smaller forms and runs away.

When Ruru then finds him masquerading as a candy apple, she is perplexed, exclaiming, ‘I don’t get you! What’re you doing?!’ To this, Magu replies, ‘By transforming my morphallactic forms, I shall rule over this New Year day, or whatever you call it.’ Basically, he’s taken on the forms of various things associated with the Japanese New Year, causing the chapter to become a giant game of Where’s Waldo.

This contrast between the arcane and the mundane is one of the funniest things about Magu-chan: God of Destruction, and one of Kamiki Kei’s greatest strengths as a writer. Constantly, the series’ cast of cooky Eldritch characters are dressing up the most normal things to be much more than they really are through dialogue, such as the simple act of imitating a candy apple. There is a constant contrast between the discourse and the reality that is threaded throughout the series.

Take one of Magu-chan’s scummiest characters, Naputaaku ‘the Mad.’ Like Magu, he’s also an ancient god who has somehow managed to break free of his imprisonment and end up in the sleepy Japanese countryside, but his personality is quite different: while Magu is more than content to sit back and quietly add names to his BFF book, Napu is greedy, impatient, and envious of Magu’s growing power.

After chapter 10, he gets a part-time job at the Fujiwara Eatery: a small family restaurant run by Ruru’s not-so-secret admirer, Ren. This leads to him getting obsessed with cooking, which he initially views as a way to regain his former physical form, but quickly becomes something more.

In chapter 23, he realizes that the money he has been receiving for his part-time job can be used to buy ingredients, allowing him to practice dishes without using up the restaurant’s ingredients. He then also learns that the hard way that gambling does not, I repeat, does not mean that you can ‘buy more money’ with money – the house always wins. This is both a good lesson for younger audiences and a way to explore his fatal flaw: laziness.

In any case, Napu’s character in this sense transforms the very mundane act of cooking and the very normal commodity of money into something special, something with far more meaning than we perhaps first realized. Combined with the heightened comedic dialogue, this means that Magu-chan has the power to elevate reality into something more, something a little magical; and that might be exactly what we need right now.

Magu-chan: God of Destruction has another appeal point that is worth talking about: iyashikei, or a certain ‘healing’ quality. Indeed, this is what many Amazon reviews of the first volume mention, and I have to agree with whoever wrote them: owing to its rural countryside setting, it does share remarkable similarities with the likes of Non Non Biyori and Yuru Camp.

Yet, the rural setting is only one small part of the story, and the series as a whole gives off much more of a ‘wacky’ feeling than some of those other series. If anything, there is less of an intentional healing quality here than some of those others: Magu-chan doesn’t allow us to bask in the glory of the Japanese alps like Yuru Camp, nor does it focus on low-stakes agricultural antics like Non Non Biyori. And don’t get me wrong: I love both series!

Instead, I believe that Magu-chan’s strength comes from its quality writing, which is inherently linked to Kamiki Kei’s strong grasp of characterization. Considering that he has no other series under his belt, that’s honestly quite surprising: he’s clearly got a lot of talent.

To conclude, is Magu-chan quite silly? Yes. Is it a fluffy feel-good story? Absolutely. But it’s also one that’s incredibly well put together and well worth your time.

You can read Magu-chan: God of Destruction for free via VIZ Media’s Shonen Jump.