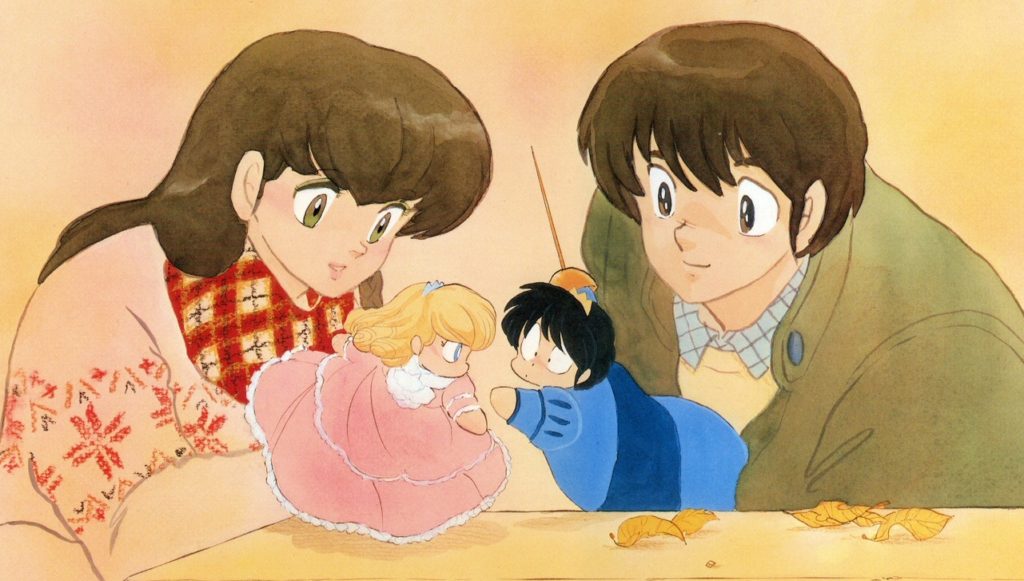 No doubt you’re familiar with Rumiko Takahashi. Even if the name doesn’t ring a bell, you’ve surely watched Inuyasha or Ranma ½ at some point in your life? Perhaps on Twitter or Tumblr, you’ve seen images of cute anime girls with long green hair and short horns? That’s Lum from Urusei Yatsura and she’s a national icon in Japan.

These three works are Rumiko Takahashi’s most famous, making her one of the most successful manga artists of all time. There’s one more title that she created during her prime that’s deserving of acknowledgment, Maison Ikkoku.

Much less fantastical than her other big works, you won’t find any flying space alien babes, martial artists who turn in ducks or pandas, nor will you get transported 500 years into the past. Maison Ikkoku is a down to earth story of the wacky residents who live in a run-down boarding house of the same name. When the young Kyoko Otonashi takes over, the penniless flunkee Yusaku Godai instantly falls in love.

Can he ever win her over when the infinitely more successful tennis coach Shun Mitakata makes powerful swings for her love? You’ll have to read to find out.

What Makes The Maison Ikkoku Manga A Classic

A strong statement, but Maison Ikkoku might be the single most charming manga on earth. A product of the early 80s, Rumiko Takahashi’s visual style radiates with that classic vibe you just don’t get in anime or manga anymore. Light-hearted and pleasant, yet filled to the brink with charm and character.

The hijinks of the other boarding house members, Akemi the drunkard, the rude and gossipy Mama Ichinose, and the mysterious Yotsuya who all care nothing for Yusaku Godai’s sanity remain genuinely funny throughout the comic’s entire run. Watching Godai try to triumph over Mitaka in winning over Kyoko’s heart when his housemates are always up to no good remains one of the most entertaining manga conquests ever.

Good Luck Finding The Maison Ikkoku Anime, But You’re In Luck If You’re Seeking Out The Manga.

Being a huge hit when it came out, of course, Maison Ikkoku got an anime. It was pretty good too, full of 80s anime flare, and had an absolutely killer soundtrack. Unfortunately, both the manga and the anime have been out of print for a long long time. One hopes someone will rescue the entire anime someday, but we would especially like to see the Tomomi Mochizuki directed film resurface.

Thankfully though the Maison Ikkoku original manga is finally, and we do mean finally, coming back thanks to Viz Media. After the success of their Ranma ½ and their Urusei Yatsura reprints,  the publisher finally decided to reprint this classic comic after years of requests for it. Like the latter reprint, this new edition of the Takahashi work will come in an oversized 2 in 1 format making it an ideal addition to any manga aficionado’s collection.

The Maison Ikkoku Characters Or Tenants If You like.

Maison Ikkoku was basically the blueprint for other series to come like Love HIna where you just have a bunch of people living together with all hell constantly breaking loose. Instead of more modern takes of the set-up though, instead of everybody being in love with the main character they all take turns dunking on him. Constantly.

With the house so full of engaging personalities, we thought it was imperative to document them all here. A real collection of misfits and weirdos, living at the Maison Ikkoku is either bliss or hell depending on how much you’ve given in hedonistically lazing the days away with cheap beer and good friends

Poor Yusaku Godai. No one believes in this broke kid struggling to get a start on life. To be fair, he couldn’t get into college on his first go and never comes across as dependable.

He’s not a complete pervert but he’s not really altruistic either. If he has one good quality though its that he knows how to scrape by, and keep trying in the face of failure until he eventually succeeds. You almost can’t blame him for his bad luck when his housemates go out of their way to terrorize him on a daily basis.

Yusaku does grow throughout the series though, making his way through college and eventually stumbling onto a profession that’s a good fit for him. Will that be enough to make him win over the woman of his dreams though?

In her early 20s and already a widow, Kyoko Otonashi didn’t imagine she would be taking over the Maison Ikkoku boarding house but she gives the job her all. Not ready to let go from her departed husband, she has her hands full dealing with Yusaku Godai and Shun Mitaka not to mention her own parents who constantly try to convince her to move home. She’s a classic, not to mention actually of age, anime beauty whose jealousy issues and short fuse make her all the more endearing.

While Maison Ikkoku doesn’t delve into extreme trauma, incorporating a realistic depiction of an unfortunately young widow does set this comic apart from any high school romance manga.

Shun doesn’t live in the Maison Ikkoku buildings with Yusaku, Kyoko, and the rest. Instead, he teaches tennis at a park nearby and rakes in the cash giving lessons to the bored housewives in the neighborhood. He’s handsome, financially secure, and has a perfect smile making him quite the rival in love.

How could Yusaku Godai ever compete with this perfect specimen? By exploiting his irrational fear of dogs, for one.

Some time before the series began, Kozue Amano and Yusaku Godai worked the same part time job together. When they bump into each other on the street one day, things kind of take off for them and a relationship begins to bloom.

However, it’s clear that Kozue has the bigger crush on Yusaku who’s devoted to Kyoko. Truly he only keeps on going out with the cute and kind Kozue because he’s a coward, although having Shun Mitaka in the picture doesn’t help to stop Godai’s indulgences.

You have to wonder why she sticks around, but boy does she.

Out of the three trouble makers, Akemi’s probably the most fearsome. She walks around the complex with a see-through shirt with no reservation, and works night shifts at a local bar making her no stranger to manipulating idiot men into indulging her when necessary. She thinks Shun Mitaka is certainly an attractive young man, but once she sees how easily he gets caught up in the Kyoko and Godai shenanigans, she more than happily backs off.

Along with Mr. Yotsuya and Mrs. Ichinose, the trio get drunk and cause a ruckus almost every night.

Yotsuya-san’s something of a mysterious character, as the reader never does find out his first name or what his job is. He sure does leave the Maison Ikkoku apartments every day, and is once tailed by Godai but successfully gives him the slip. His favorite pastimes include peeping on innocent women as they’re changing and trying to convince young Godai, as Yotsuya calls him, to give him free food and drink.

Mrs. Ichinose is somebody who should really act a bit more maturely, what with her being married and raising the young Kentaro. Instead the homely housewife drinks the days away with Yotsuya and Akemi, and indulges in gossip with Kyoko and whoever else the minute she hears something spicy. At heart she’s a good woman who tries to do right by her son and her mates, although she can be awfully gullible…

This old dog causes quite the confusion at worst when Godai and the rest of the Maison Ikkoku residence heard Kyoko crying his name out at night before learning about the person he was named after.

A big fluffy boy, he gets along quite well after moving with Kyoko into the boarding house with Kentaro Ichinose taking to him in particular. As an added bonus for Yusaku Godai, the dog may have been directly responsible in stopping Shun Mitaka from having won over Kyoko more than once due to his great fear of all pups.

He’s the man Soichiro the dog was named after, and happens to be Kyoko Otonashi’s recently deceased husband. He was her teacher when she just a high school student, and she played every dirty trick in the book until he was hers. The series starts after his death, so we never even get to see his face but Kyoko and the Otonashi family have described him as a kind and gentle man.

Being such an important and widely read manga from one of the greatest creators of all time, you bet there have been multiple efforts to capitalize on Maison Ikkoku over the years. Beyond the classic tv series, this romance comedy has made several forays into the realm of live action though they can be a bit hard to track down.

Coming out towards the tail end of the Maison Ikkoku manga run, this film captures the charms of Japan in the 80s when the series was actually being made.

Being a more subdued realistic story, Maison Ikkoku made the leap to film well with the filmmakers opting for a very natural and true to life presentation with the visuals. The wacky hijinks are all still here, and though you might have trouble tracking the movie down with it long out of  the box office, trailers and clips are available with simple searching.

While technically a made for TV Special, the 2007 effort runs the length of a full film too and could be considered as such. It modernizes the Maison Ikkoku story, with the opening shot of the work establishing a 2007 time frame but retains the series charm otherwise.  This first effort pretty much revolves around Godai and Kyoko, and their life at the eclectic boarding house.

A year after the first drama came out, the folks at TV Asahi developed a second installment of this iteration of live action Maison Ikkoku. This time around, the include the hotty tennis instructor Shun Mitaka and the cute college student Kozue Amano, who are competing love interests for Kyoko Otonashi and Gyodai respectively. Maybe two dramas can’t cover the same amount of ground 96 episodes of a romance anime could, but the pair do an alright job.