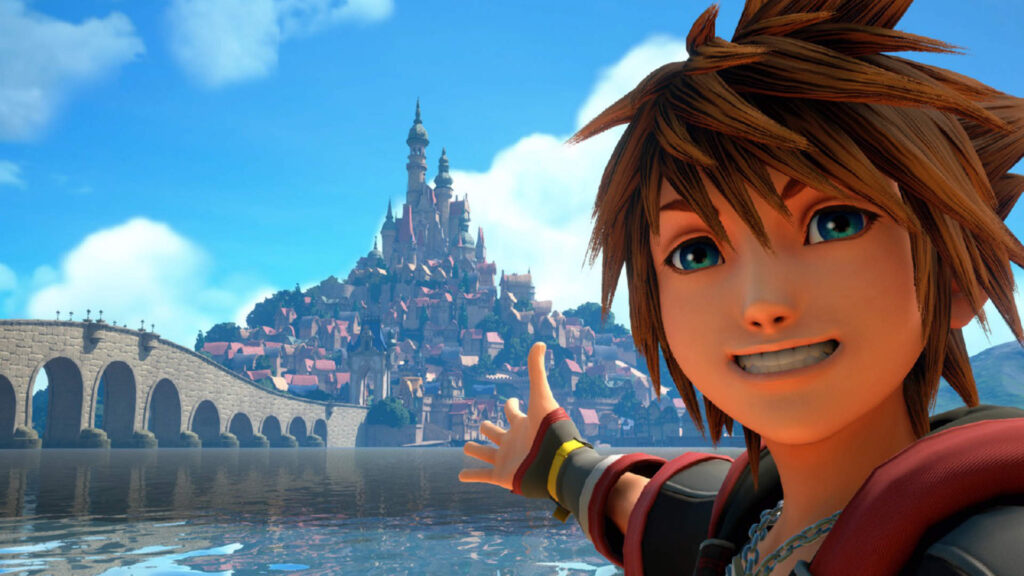 For a game that only has 3 entries to the main story, there is quite a lot of lore involved in Kingdom Hearts. So much that it can be daunting to come into the story at any particular point, and it’s difficult to know where that point is. As Kingdom Hearts 3 began nearing its release date, there was a keen interest in fans that had maybe fallen off the Kingdom Hearts wagon trying to get themselves caught up to the story so far. But for those brand-new to the series, it’s a little easier to wrap your head around the concept.

What is Kingdom Hearts?

This is a complicated question to answer, mainly because it depends on the nature of the question. If the question is ‘what is the game series Kingdom Hearts’, the answer is that it’s an RPG about a boy entrusted with a powerful weapon called a Keyblade that has the ability to unlock and seal other worlds. He uses this weapon to fight an enemy called the Heartless, a race of monsters born of the darkness in peoples’ hearts. He also is looking for his friends, whom he lost when the Heartless destroyed his world. Also there are characters from Disney movies, as well as characters from the Final Fantasy series.

If the question is ‘What is the titular Kingdom Hearts, the object that everyone seems to be searching for’, the answer is even more complicated. It’s generally agreed to be the source of all power and wisdom, although in the series there are many replicas or versions that are brought into being. Oftentimes it’s an aggregate of many other hearts, as at one point an artificial version was being created. Sometimes it’s summoned, sometimes it’s accessed, but whenever it does show up it’s a good indicator that A Final Battle is taking place.

What Order Should I Play Kingdom Hearts In?

If you’re somewhat familiar with the twists and turns of the Kingdom Hearts story, you may know that there is a bit of hopping back and forth in time if the games are played in the way they’re released, i.e. starting with Kingdom Hearts, Chain of Memories, Kingdom Hearts 2, Coded, 358/2 Days, Birth by Sleep, etc.

The earliest chapters of the Kingdom Hearts saga take place in Unchained χ. The events in this mobile and browser game take place before The Great Keyblade War, an event that predates the events of Kingdom Hearts 1, and understandably affects quite a bit of the story. This covers things like who the Master of Masters is, who his students, the Five Foretellers are, and their conflict that eventually led to the war. It’s not vital to play this game, but it does set things up for the future.

Birth by Sleep is the next game in the story, and follows three Keyblade apprentices as they train to become Keyblade Masters. It sets many of the events of the first game in context and covers the characters introduced in the first Kingdom Hearts. It also sets up events that will play out in Kingdom Hearts 3, so it may be best to play this game in between 2 and 3. The story follows Aqua, Ventus, and Terra as they train to become Keyblade Masters and how their relationship between each other develops as they go on their final quest, including Terra’s fall from grace. It also covers Master Xehanort, his actions during this time, as well as Vanitas, a Keyblade wielder born from the darkness in Ventus’ heart. Birth by Sleep also introduces the Unversed, the enemies of the game that are attracted to negative emotions and come from the negative emotions of Vanitas. Again, if it weren’t for the games that actually came out between 2 and 3 it would be worth it to play this in between them.

Finally we get to the first Kingdom Hearts. This introduces the series’ main protagonist Sora, as he’s pulled from his world and charged with saving countless others. Sora also spends the game looking for his friends Riku and Kairi, as well as bonding with Donald Duck and Goofy while facing off against the Disney villains who are looking to exploit the power of Kingdom Hearts. Kingdom Hearts covers Riku’s seduction by the forces of Darkness, the Seven Princesses of Heart, and how their hearts unlock Kingdom Hearts as well as how Kairi fits into all of that. It also covers King Mickey (Mouse) and his experiments and trials against the darkness. The game also introduces Ansem, his designs, goals, and a bit of his backstory as the master manipulator behind everything.  Because this is the first game, it’s probably best to start with it as it establishes a baseline for all of the characters that come up in the rest of the game and establishes much of the mechanics by which the worlds operate.

Chain of Memories was the first game released after Kingdom Hearts and takes place immediately after Sora defeated Ansem and Riku and Mickey were sealed in the land of darkness. It introduces Organization XIII or simply The Organization and the concept of Memories as a world element; After defeating Ansem, Sora, Donald and Goofy come upon Castle Oblivion while looking for Riku and Mickey, who were both sealed in the land of Darkness after Ansem’s defeat. They’re warned that the further in they go, the more of their memories they’ll lose. Chain of Memories introduces Namine, who has been the one actually manipulating Sora’s memories. The game ends with Sora being placed into a special pod in order to recover the memories that were altered by Namine, and informs elements of later games. Chain of Memories also picks up on Riku’s story as he struggles with his own internal darkness and the grip that Ansem still has on his heart. Chain of Memories functions as an intermediary story, as many of the elements and characters that feature in it wouldn’t be fully explained until later iterations of the game.

Kingdom Hearts: 358/2 Days takes place somewhat concurrently with Chain of Memories, and chronologically is the first time canonically the series mentions Roxas. 358/2 Days (Read as ‘Three Five Eight Days Over 2. No one knows why.) was released after Kingdom Hearts 2, and assumes the player is familiar with the concept of Nobodies and how they’re created. Roxas, as explained in Kingdom Hearts 2, was created when Sora released his heart in Kingdom Hearts to Kairi, and he became a Heartless. When certain people become Heartlesses, a Nobody is created from the body they leave behind, and if you’re cool enough your Nobody will be a version of you with all your memories intact. Because Sora’s memories were scrambled in Castle Oblivion, Roxas doesn’t have any of Sora or himself. The game follows Roxas’ induction in Organization XIII and his friendship with Axel, who proved to be somewhat of an ally in Chain of Memories. This game also goes much deeper in-depth on the group dynamics of the Organization, including the machinations of its leader, Xemnas. It also introduces Xion, and expands upon the concepts of replicas explored in Chain of Memories. 358/2 Days also functions as a continuation of Riku’s story and where he ended up post-Chain of Memories.

Kingdom Hearts 2 was released after Chain of Memories and picks up where 358/2 Days left off. After Riku defeated Roxas at the end of 358/2 Days he was placed in a digital copy of his hometown as a sort of stasis while Sora (Along with Donald and Goofy) had his memories restored, having also been put in stasis to do so following the events of Chain of Memories. Kingdom Hearts 2 also explains the origin of DiZ, a man working with Riku since he was trapped in Castle Oblivion, and thereby the entire Ansem conspiracy. DiZ is actually Ansem the Wise, and the Ansem that was fought in the first Kingdom Hearts was a Heartless of Xehanort, who became Xemnas after banishing Ansem the Wise and assuming his identity. Xehanort, if you recall the events of Birth by Sleep because how can you not, in this instance is actually Terra who has been possessed by Master Xehanort, and lost most of his memories at the end of Birth by Sleep. Kingdom Hearts 2 then becomes a dive into the dynamics of the Organization from an antagonistic perspective, and explains what Nobodies are and how they’re formed. Organization XIII succeeds in reconstructing a Kingdom Hearts from the hearts of defeated Heartless, but Ansem the Wise uses a device to translate it into data. This fails, but Xemnas is ultimately defeated.

Kingdom Hearts: Dream Drop Distance takes place after Coded and follows Sora and Riku as they train to counter the return of Master Xehanort. This sets up the final struggle in Kingdom Hearts 3, as during the game Xehanort reveals his game plan to use 13 Seekers of Darkness against seven Guardians of Light in order to reconstruct the χ-blade, which is used to open the door to the true Kingdom Hearts. In order to prevent this, Sora and Riku must enter ‘Sleeping Worlds’ and unlock keyholes in order to bring them back to the light. Dream Drop Distance also introduces Dream Eaters, which function as the enemies in this game. There are two kinds of Dream Eaters, Nightmares and Spirits. Nightmares are enemy Dream Eaters that eat good dreams and make bad dreams, and Spirits do the opposite and function as party members for Sora and Riku. The game ends as Sora and Riku are declared Keyblade Masters.

Each of these concepts comes to a head in Kingdom Hearts 3, which doesn’t introduce new concepts so much as it mashes them all together and the story is about how they come together. What does come to light is Sora’s ‘Power of Waking’ which allows him to restore lost hearts. Kingdom Hearts 3 is largely accepted to be the end of Xehanort’s story as the seeker of darkness. While DLC has been released that follows up on Sora’s story post-game, as well as some of the leftover villains, there’s no real information on any upcoming releases other than rumbles concerning a new mobile game.

The plot and lore of Kingdom Hearts is such a tangled, twisted sea of threads involving time-travel, possession, data, virtual worlds, and an ever-evolving sense of magic. It is at once confounding and delightful and almost requires a PhD to parse completely. When the first Kingdom Hearts was being marketed, the tagline was ‘Because you never know who you’ll run into next’, and that sense of not knowing what the next group of characters you’d run into is definitely part of the fun of playing. It really helps to focus on that aspect of the game, because as demonstrated, trying to keep track of everything that happens in the game and all of the mechanics set forward can be tiring.