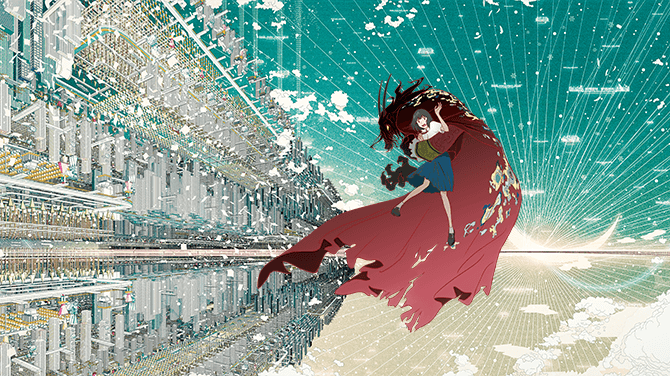 It has been three years since Studio Chizu and Mamoru Hosoda released Mirai, and the discussion of Hosoda being the ‘next Hayao Miyazaki’ hasn’t died down in the slightest. And it doesn’t seem like it is going away anytime soon. Now that the trailer for Hosoda’s upcoming movie Belle is finally out, we can only expect a whole new wave of enthusiasm and hype.

The thirty-second trailer provided a flashy whirl of snippets from the movie, showing off worlds filled with flying whales, cybernetic cities, and darkened, spiraling staircases, among other things. Granted, because of the short runtime, these clips were very short in nature. But thanks to an epic orchestral arrangement and a snappy use of montage, the trailer was able to provide an exciting and emotional weight to it.

Visuals were released alongside the trailer, both of them showcasing essentially the same thing: that our protagonist Suzu, upon entry into this new virtual world, gets snatched up by a shadowy dragon lord. This dragon lord only appeared in the trailer for a brief millisecond, with the words ‘You don’t have any reason to exist, Dragon’ appearing in a speech bubble right next to him. Could he be the film’s antagonist? Perhaps. But we’ll just have to wait and see for ourselves.

Hosoda enthusiastically commented that Belle is the type of movie he has ‘always wanted to create’ and that he expects it to be a ‘big entertainment spectacle.’ Hosoda also went on to state that he wanted Belle to be a movie that focused on the positive effects of the Internet, no doubt as an expansion on the commentary embedded in his previous works such as Digimon Adventure and Summer Wars.

Belle, also known as Ryū to Sobakasu no Hime (The Dragon and Freckled Princess), features Suzu as an ordinary girl living in a very rural suburb with her father. However, the sudden loss of her mother before the film’s events has left young Suzu traumatized. When she is isekai’d into the virtual world of ‘U,’ she fulfills her innermost escapist desires by becoming an idol known as ‘Belle.’ From there, Suzu becomes U’s next big pop star and embarks on a journey to understand love and her inner self.

Belle will be released in Japanese theaters this summer, ringing in Studio Chizu’s tenth anniversary. You can catch all upcoming news on Studio Chizu’s Twitter or on the film’s official website.