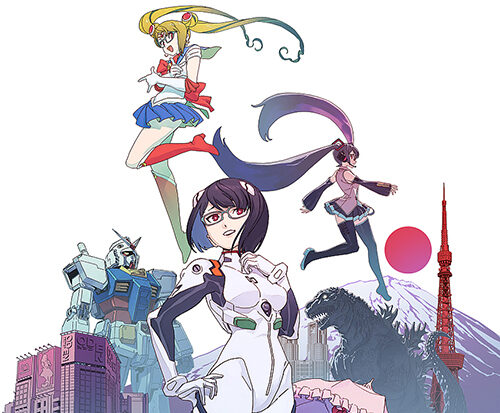 The exhibition opened on Aug. 12 and will continue until Nov. 3 at The National Art Center, Tokyo.

According to the MANGA Toshi TOKYO website, the exhibition features a huge 1:1000 scale model of Tokyo. This model is surrounded by exhibits of anime, manga, games, and tokusatsu set in Tokyo.

The first section of the exhibition deals with the “repeated destruction and reconstruction” of the city.  Many different movies and series, from Godzilla to Akira to Evangelion, have shown Tokyo getting hit by natural disasters, alien invasions, and/ or monster attacks.  This section looks at the apocalyptic themes of these works.

The second part is called “Everyday Tokyo.” It looks at the daily lives of Tokyo people during different periods of history. It is divided into three sections — “Edo as a pre-Tokyo,” “From the Dawn of Modernization to the Postmodern City,” and “From the End of the Century to the Present.”

The third part is called “Character vs. City.” The section focuses on anime, manga, and promotional mascot characters which have been brought to life through public statues and so on.

“The installation will recreate the ambivalent appeal of Tokyo as a city where living humans and characters coexist,” the website states.

It gives the giant Unicorn Gundam in Odaiba and a statue of Kankichi from the manga KochiKame as examples.

According to Japan Wireless, the exhibition includes more than 500 pieces on display, including artwork, production materials, and videos.

The National Art Center had previously celebrated manga, anime, and video games in the 2015 exhibition, Manga * Anime* Games from Japan, which featured more than 25 years of Japanese pop culture.

According to the National Art Center’s website, the MANGA Toshi TOKYO exhibition was first displayed in 2018 in Paris, France, as part of Japonismes 2018: les âmes en resonance (or “souls resonate” in English).

According to the center’s website, general admission tickets are 1,600 yen for adults, 1,200 yen for college students, and 800 yen for high school students.  In addition, online reservations are required. You can reserve tickets here.

The National Art Center, Tokyo, is at 7-22-2 Roppongi, Minato-ku in Tokyo. The center is at Exit 6 of Nogizaka Station on the Chiyoda Line.