Revisiting the Gorgeous Art of Maquia at the Yurakucho Marui Exhibition 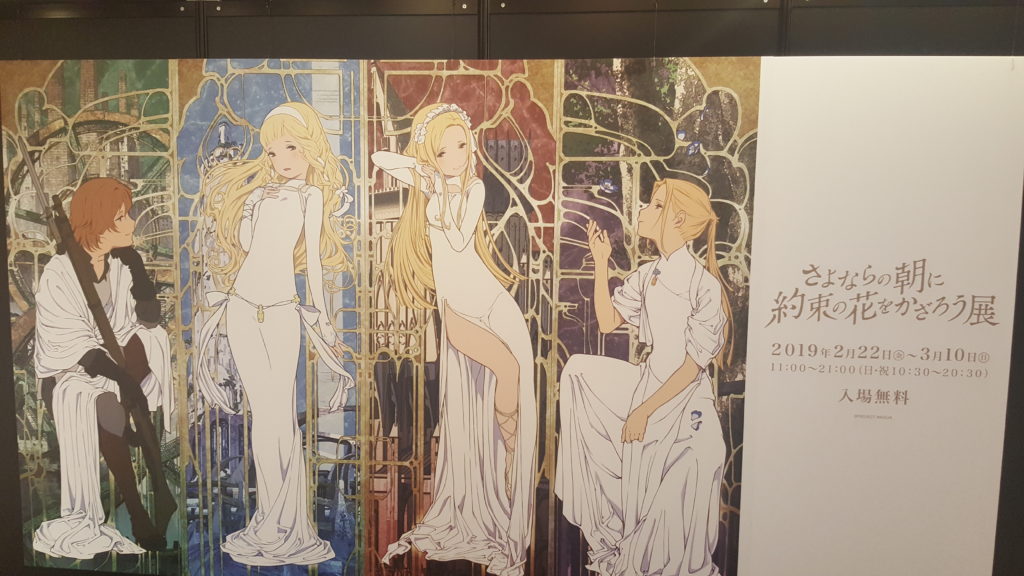 It’s always a nice time visiting Yurakucho. For one, the Yurakucho Marui store often features anime collaborations and exhibits on the eighth floor. For instance, Gonzo had a large exhibit celebrating its 25th anniversary last year. Visiting Yurakucho is also great because it’s home to one of Tokyo’s few Shake Shacks and I have genuinely been there every single time I’ve been in that area.

This time, I was there for Maquia: When the Promised Flower Blooms (and a Smoke Shack burger). Snubbed by Crunchyroll’s Anime Awards, it seemed only right to remind myself of the appeal of 2018’s best anime film. Unlike other exhibits in this space, it was free to explore the art and designs of Maquia.

We’ve reported before on the fact that character designer Yuriko Ishii’s collection of works, Lilium, would receive a pre-release in this space, so before I went in, I made sure to take a look inside. As was revealed, this book features art from many of her works, including Maquia, A Lull in the Sea and Kuromukuro. It even featured some special illustrations such as the poster for Scotland Loves Anime.

The first part of the exhibit itself focused on her character design work. These designs were adapted from illustrations by Final Fantasy XII character designer Akihiko Yoshida but Ishii emphasized a softness in her adaptations and worked to make sure that the animation staff could make these characters stand out on screen. To achieve this, she also worked as Chief Animation Director on the film.

Maquia has been shown in theaters all over the world, starting with All the Anime’s release in the UK. This part of the exhibition showed different posters released in different parts of the world. Some companies used All the Anime’s logo, such as Eleven Arts in the US and Madman Entertainment in Australia, but countries like the Philippines and Vietnam used their own font, whilst Thailand used the original Japanese poster. The film has been released in over 20 countries with its most recent upcoming release being in Germany. 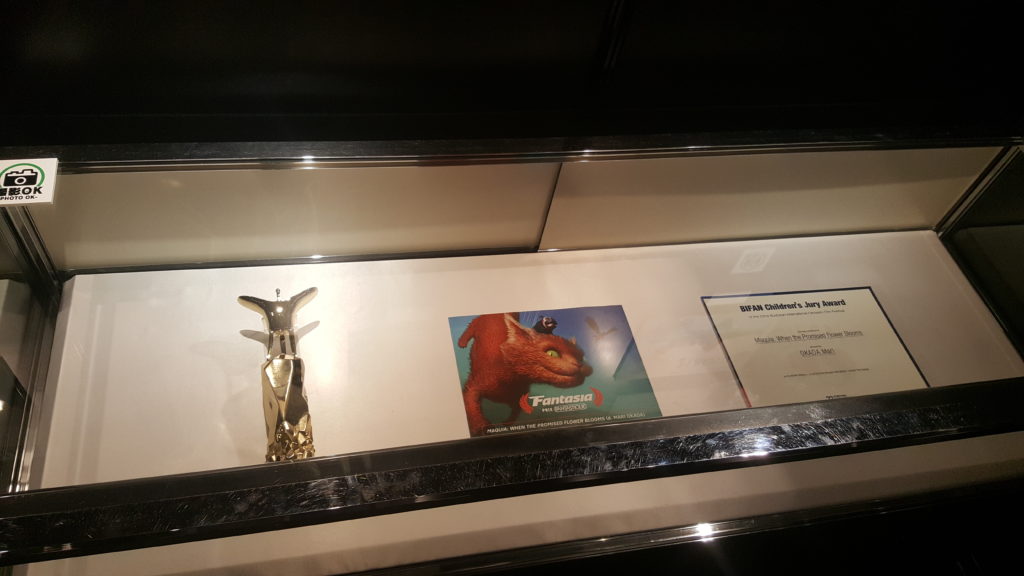 The film has also won awards (not enough, though). From left to right, the awards showcased were “Best Animation Film” at Shanghai International Film Festival, The L’Écran Fantastique Award for the 2018 edition of Fantasia (Canada) and the BIFAN Children’s Jury Award at Bucheon International Fantastic Film Festival.

There were significant parts of the exhibit that I wasn’t allowed to take photos, but there was one particularly special part that stood out from other anime exhibitions I’d been to. This room was a recreation of the Hibiol weavery with silk hanging from the ceiling. This silk was created at Shike Silk, a silk factory in Nanto, near P.A. Works’ studio which was frequently used as a reference for the film. I visited the factory in 2017 and it was remarkable seeing how the delicate techniques (although a lot more modern than in the film) were adapted into Maquia.

The final room featured the artwork of background artist Kazuki Higashiji all along the walls. Higashiji has been a key part in P.A. Works background work, starting with him directing the backgrounds for Angel Beats! in 2010. One of his first times creating fantasy backgrounds was with A Lull in the Sea in 2013 and last year’s Maquia represented yet another step up for the artist.

In that same room was a case of reference material. One showed a baby doll with a photo of P.A. Works president Kenji Horikawa changing its nappy (as the reference for the start of the movie when Ariel is still a baby). There was also an old rifle next to it, which was held by the animation staff to get a better idea of how guns should be shown in the movie. One of the other fun details was that Ariel’s drawings as a child were drawn by children and then placed onto rocks within the scene.

The exhibition itself was represented with a new illustration of the four main characters. These illustrations could also be purchased as acrylic stands, key chains, and clear files.

The exhibition will be held until March 10th on the eighth floor of the Yurakucho Marui department store in Tokyo. As I mentioned before, it’s free to enter, so it’s definitely worth the trip!