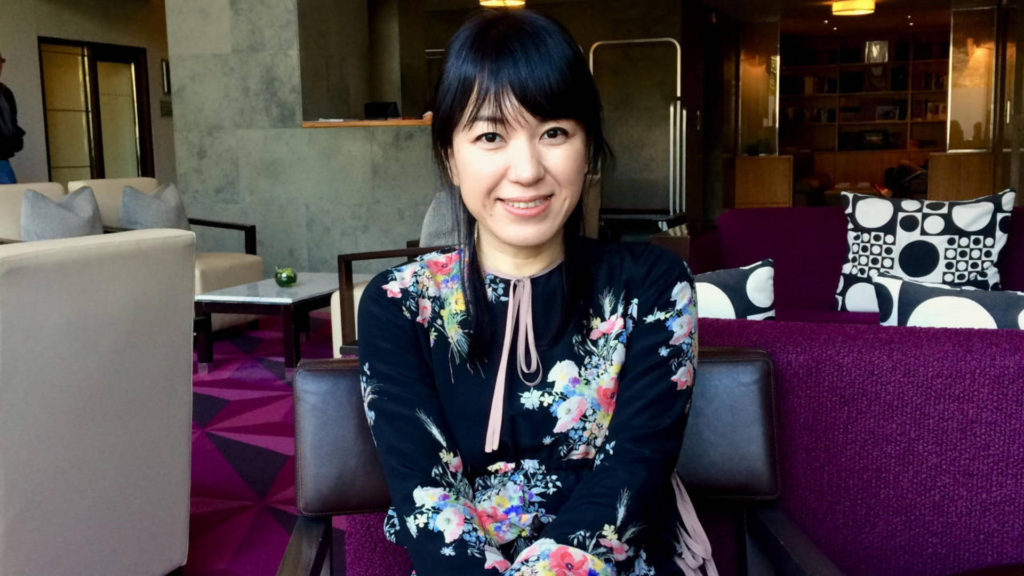 It’s no small secret that within the anime industry right now, there’s no name more prominent than that of scriptwriter-gone-director Mari Okada. She’s been the driving force behind some of the biggest animated titles in recent memory, from “Anohana: The Flower We Saw That Day” to her most recent Maquia: When the Promised Flower Blooms, Ms. Okada really is showing no sign of slowing down.

Recent times have seen a particular spotlight on the creative, only further fueled by the English-language release of her heart-wrenching autobiography From Truant to Anime Screenwriter: My Path to “Anohana” and “The Anthem of the Heart”. During this year’s Anime Expo event, we were given the incredible opportunity to sit down and have a one-on-one discussion with Mari Okada ahead of Eleven Arts’ nationwide theatrical release of Maquia: When the Promised Flower Blooms in North America.

Our full interview can be read below:

OQ: It’s well documented throughout your incredible autobiography “From Truant to Anime Screenwriter: My Path to anohana and The Anthem of the Heart” that your life before joining the anime industry was anything but easy-going. Now being regarded as one of the greatest anime screenwriters of all time, how does it feel to know that you carved this path yourself?

MO: This time around when writing my autobiography, I looked at a lot of my old journals to take a look at what my thoughts were during that time. It was kind of startling to see all the old thoughts that I had at the time, though at the same time felt like there was a lot I could learn from my old self. I think at the time I thought of myself as “shit” in a word, even going as far as wanting to disappear, but looking back now I feel that I have a lot of respect for that person. So even the young people now who are struggling, if they look back on their lives I think they’ll see a lot that will help them understand themselves.

OQ: Jumping back to something you mentioned there, you said you would often look back at your old journals and read over everything you wrote in them. Writing seems to have always been a big part of your life; from a way to convey emotions to a way to express desires. My next questions leads into that a little bit — It’s not often that a creative comes forward with such a troubling yet powerful life story and is capable of applying both themes from their past – and themes absent – to their works. Can you share how your upbringing affects the stories you create, especially looking at your most recent works such as Maquia – When the Promised Flower Blooms? MO: In my autobiography I wrote that when I was staying home during my high school years, there wasn’t any way to communicate with the outside world. I was completely indoors. Since the internet and that kind of technology didn’t exist there was no way to communicate with the outside world. In that situation my imagination really blew up, leaving me to fantasize about everything and anything. That really came in handy in writing stories like Anohana, something that draws inspiration from my own life so heavily. Though, I have a special place for other stories that are based on things I haven’t experience myself too.

OQ: While straying away from school life, it’s noted that you had one teacher in particular who would work with you to submit your works for local newspaper prizes due to your skilled writing abilities. During that time, was the idea of joining the anime industry ever something that crossed your mind?

MO: At the time I didn’t want to write scripts for animation, actually. First of all, I wasn’t even sure I would be able to graduate from school. I was worried daily, and I think what I was writing was very dark at that time too.

OQ: That’s interesting. So you didn’t want to be in the anime industry at that time, was there anything else you had as a goal before you ended up becoming a scriptwriter?

MO: I didn’t really have a goal. So when I read through my old journals and saw that I had no goal, I realized that I really must have looked down on myself. I didn’t like myself during those times. I’m not really sure if it’s this way in foreign countries too, but in Japan, if you don’t have a clear goal or a big dream you’re seen by society as being “no good”, essentially a failure. That was kind of how I viewed myself at the time of writing in my journal. Interestingly, not knowing then and just kind of putting the feelers out there to absorb things, a lot of those materials would end up shaping the person who I am today.

OQ: You mention that you didn’t really have anything that you wanted to do. But even now, outside of your work as a scriptwriter and a director, it’s clear that you do so much more. You write novels, are dabbling in manga creation — you do so much outside of the realm of anime that it’s truly impressive. When looking at your work in novel writing and manga creation, are these fields you would ever wish to pursue at a professional level, especially with where you are now as a person?

MO: When I was young there was no movement in my life — I could see that everyone else was moving around me but, yet I remained stationary. I didn’t know how to interface with that moving world outside. When I finally left the safety of my home, I really wanted to move. I found myself wanting more because when I wasn’t moving it was like I was imagining all of these things that people must be experiencing.

Once I actually got out into the world, however, there wasn’t as much as I thought there would be though. Because of this I kind of started to do more things on my own. It’s a weird way of saying it, but I kind of wanted to bring back that time. I really consider anime to be my savior, and being an anime writer feels great, its what continues to feel best. Because of that I think I’ll continue on this path.

OQ: Sorry, I’m getting a little emotional. I was really touched when reading your autobiography, so vocally discussing the subjects is a lot of feelings pouring out.

MO: Honestly I’m really impressed here [Referring to Anime Expo]. Seeing so many people expressing what they like at a young age, talking about their favorite things, making friends. That was something I couldn’t do when I was younger, so I think that’s really cool.

OQ: I think that within the anime community in the West, the story of not knowing what you’re doing can often resonate quite strongly. So having someone who made it through those unknown times, seeing someone doing what they truly love can be especially inspiring. MO: Over at PA Works there are actually more female animators than men, I actually get this question a lot when going overseas. Right now I actually feel like there are a lot more women doing this work, at least around me. When I joined there weren’t a lot of women, something that came with a fair share of challenges for sure.

OQ: What do you believe sparked the change?

MO: People who love anime started speaking out, that was a big part of it. When I was young if I said I liked anime, people would say “Oh really? You like anime?”. I wasn’t going to school, so that was another additional factor, but when I did I couldn’t share my interest with anyone so I enjoyed everything alone. Probably the biggest part of it now is that people are now confidently able to say “I love anime” without any hesitation.

OQ: I think that’s a trend that’s also changing over in the West as well. For example at this convention [Anime Expo] there are over 100,000 attendees. Even just a few years ago you wouldn’t see even half of that number in attendance. More people are speaking up about what they really enjoy, regardless of gender, and I feel like that also ties into why you hear that question often from foreign outlets.

Moving onto the next question, with this one being more about your work on Maquia. Your work on Maquia – When the Promised Flower Blooms would prove to be your first time helming the directorial role of an animated film; did you find the creative freedom enabled you to tell a more specifically Mari Okada story than previous works such as Anohana and The Anthem of the Heart? Did you prefer being in control over the project entirely instead of working under another director? MO: To begin with, the process of scriptwriting involves getting notes, and going back & forth with people. It’s a group activity, and you really have to listen to other people’s opinions. In this situation, the producer said “Write what you really want to write, you can do whatever you want”. With those words I quickly became my own worst critic. So there were things I would end up hesitating or struggling with and have to work through them.

Writers work alone at home, and I thought I liked that solitary aspect and didn’t like interacting. I had a mindset that I needed to protect myself, and that I would get exhausted if I interacted with lots of people. But being a director, I was in a situation where I had to be with people all day long, every single day; the first year was really tough. Little by little it became really enjoyable, however. I became very close with all of the staff involved. It got to the point where we would have arguments about the story every day, it kind of felt like me hitting puberty again and becoming an adult or something *laughs*.

OQ: So looking back at those moments from the first year of production and everything after, was there any particular point in time that really stood out?

MO: Toward the end there was a point where no one was sleeping much because it was so close to the deadline. There was a christmas party, or some sort of party, where we ordered some cheap pizza and we were underground at this place having a really fun time together. That really left a mark on me. I remember one of the production members yelling like he was a comedian on TV and jumping up & down. It was a really tense production environment but thanks to the break the work that we continued afterwards went really well. I realized that things like that can really benefit the end product.

OQ: I believe that’s all we have time for today, but it was an absolute honor sitting down and taking with you Ms. Okada.

MO: Thank you for your time.

With an incredible legacy and journey to her name, Mari Okada deserves every piece of recognition she’s received in recent times. Those interested in seeing her debut directorial film, Maquia: When the Promised Flower Blooms, can head over to Eleven Arts’ official website for screening locations and further details, here.

Anohana: The Flower We Saw That DayEleven ArtsInterviewMaquia: When the Promised Flower BloomsMari Okada
Join Our Discussions on Discord
Join Now