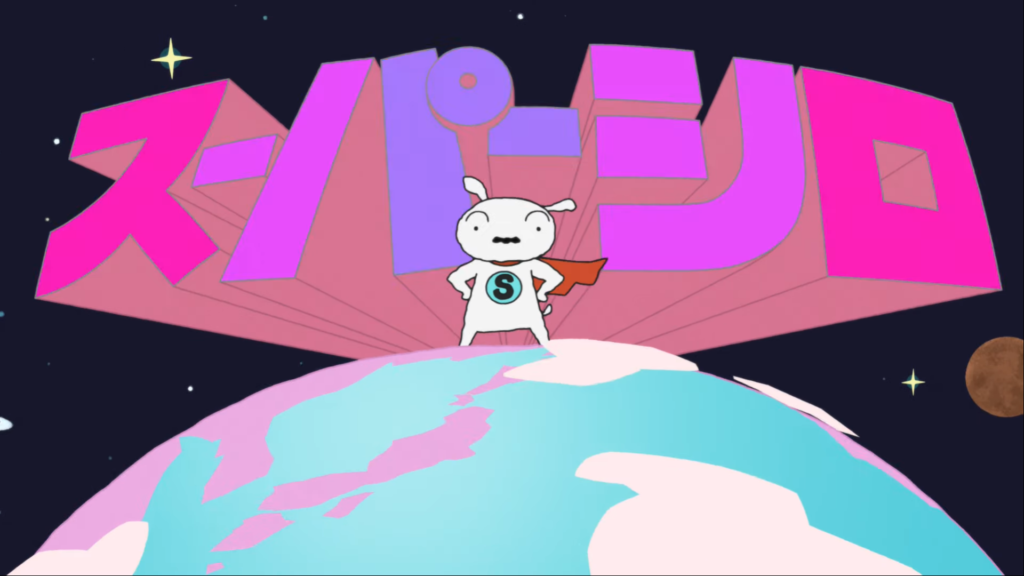 Masaaki Yuasa just doesn’t stop. He’s directed so much in the last couple years and already has so much to come out in the next two that we’re beginning to wonder if it’s too much. So far though, just about everything Yuasa’s made has been at the very least worth a watch or two. Right off the heels of his 2019 Ride Your Wave, which is still in theaters in Japan, he has a new TV anime coming out in October. One that takes him back to his roots as an animator on Shin-Chan. Yes, Action Bastard Honor and a P*nis Shin-Chan. Streaming exclusively on Abema TV in Japan this October comes Super Shiro.

Shiro is Shin-Chan’s dog. In the original tv show, he’s just a dog. A little mischievous sometimes but otherwise your ordinary yapping mutt. Here, Yuasa’s made the big brain move of turning Shiro into a Super Hero voiced by Akio Ohtsuka who’s most notably the Japanese Solid Snake. Unlike the famous American Dub of Shin-Chan which was given a TV-14 rewrite for Adult Swim viewers, it’s a kids anime watched by all in Japan. I don’t think we’ll see any of the types of stuff Yuasa’s done in Devilman crybaby or Kaiba in this. What I do think we can expect out of Super Shiro is an incredibly entertaining kids cartoon with endearing, vibrant animation; and that’s enough for me.

Crayon Shin-Chan has come and gone in the west but it’s genuinely a staple for children in Japan. It’s one of the few manga that publishers have kept going after the death of the original author simply because, like a Doraemon or a Sesame Street, it’s an integral part of kid’s entertainment. Before he was ever known for his experimental and original works, Masaaki Yuasa worked on a lot of Shin-Chan so it’s very cool to see him get to put his spin on it now with Super Shiro.

Super Shiro hits Abema.TV this October and we’re hoping Crunchyroll or someone like them streams it for the rest of us.