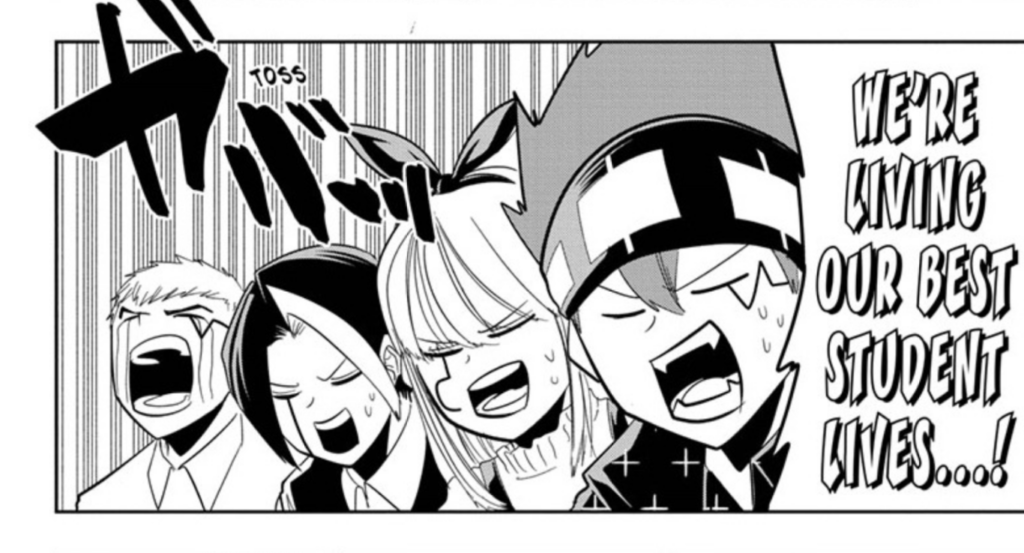 The beginning of a new week can only mean one thing: time for new Weekly Shonen Jump! This is where Jacob investigates the latest and greatest in the magazine, telling you what’s worth your time and what’s not. You can find coverage of other series under the tag Jump Time. Here’s MASHLE chapter 43.

If you’d told me six months ago that I would enjoy a fairly innocuous slice-of-life chapter featuring the characters of MASHLE: Magic and Muscles, then I probably wouldn’t have believed you. Hajime Komoto’s series has come a long way since its magnanimous beginning; MASHLE chapter 43, I suppose, is just the latest example of that.

MASHLE chapter 43 isn’t perfect. Far from it. Only some gags land thanks to the chapter’s rough-and-ready art and occasionally out-there premise: when Mash and Dot are playing ‘koala snot darts,’ it’s particularly confounding. Why would the darts bounce back? What’s the point in the entire activity in the first place? The repeated visual gag also, to be honest, doesn’t give the impression that the whole thing was very well thought out.

Nevertheless, MASHLE chapter 43 is, on the whole, quite enjoyable. This is doubly the case because some important plot progression is made: not only does Lance imply that the Divine Visionary selection exam is coming up soon, Mash ends up getting a wand. Could this imply that he will be learning some form of ‘magic’? Perhaps.

MASHLE has never been shy about wearing its influences on its sleeve, so all of this in chapter 43 is hardly surprising. What did surprise me, however, was when Mash earnestly said to his friends, ‘Let’s come back again sometime’ and they walked into the distance. It made me feel the so-called ‘springtime of youth,’ and made me realize that I do like these characters, after all.

I just hope we get a training arc sometime soon.

You can read MASHLE chapter 43 for free via VIZ Media.