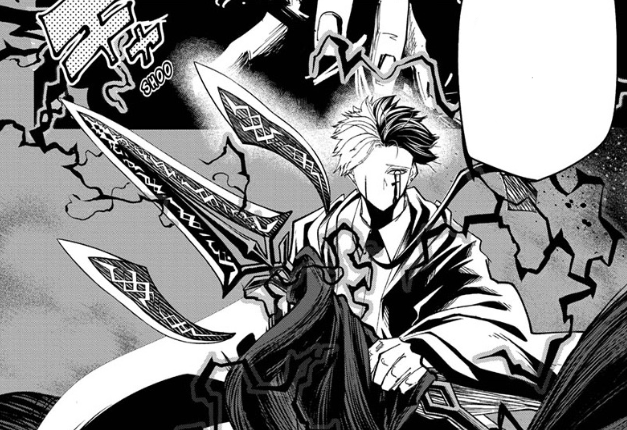 The beginning of a new week can only mean one thing: time for new Weekly Shonen Jump! This is where Jacob investigates the latest and greatest in the magazine, telling you what’s worth your time and what’s not. You can find coverage of other series under the tag Jump Time. Here’s MASHLE: Magic & Muscles chapter 46.

To be honest, I’ve said that MASHLE needs a properly defined power system so many times that it may have lost its meaning. Even so, it still remains true: while the series’ art and more endearing characters (not all of them) may have improved over time, the lack of a proper power system still drags it down and prevents its flashy battles from being 100% engaging. As it turns out, I should have been more careful what I wished for, as MASHLE chapter 46 finally grants my long-held desire, but in a twisted way.

Unbeknownst to Mash and friends (who are playing board games inside Mash’s family home), Divine Visionary Rayne Ames is protecting them from an attack by Margarette Macaron, a prefect from Orca dorm, in the forest just a stone’s throw away. Incidentally, Margarette signifies everything wrong with Hajime Komoto’s approach to writing villains with his effeminate appearance and outlandish persona, but that’s hardly the most important part of MASHLE chapter 46. Instead, this chapter finally explains a part of the concepts that underlie the series’ fictional magic system, or at least when it comes to the most powerful characters in the series.

As explained by Easton headmaster Wahlberg in a bit of exposition, only a magic user with three lines (a ‘triple-liner’) can awaken a wand’s ‘true form,’ which is described as ‘a gift from the gods.’ In Raynes’ case, his three lines (revealed at the end of last week’s chapter) allow him to summon the power of Ares, the God of War, through his wand, which is referred to by Margarette as the ‘sword cane.’

So yeah, this is basically the same as The God of High School. Well, it’s not exactly the same, as the characters in Songje Park’s WEBTOON series don’t necessarily need a weapon to summon the power of the gods (referred to as charyeok), but there’s no denying the similarities.

To be absolutely clear, I have no concrete proof that Hajime Komoto has read or even heard of The God of High School, but that is where my mind immediately went upon reading MASHLE chapter 46. Borrowing ideas from another series, however intentional, isn’t even a bad thing, but not really what the series needed: we now have an idea of what the abilities of the Divine Visionaries are thanks to MASHLE chapter 46, but not the average magic user.

In search of awesome visuals, Komoto may have jumped the gun.

Is it possible that MASHLE might dial back from the exposition presented in chapter 46 and eventually do this more foundational work? Maybe, but I don’t have that much faith considering how quickly the series’ power ceiling is growing. This is another problem that has been annoying me in recent weeks, as Komoto appears to be leveling up our main characters way too fast: the last arc already saw the emergence of ‘double-liners,’ and now we’re already up to three. What’s next? Quadruple-liners? Quintuplet-liners? It quickly loses meaning.

Admittedly, setting a high power ceiling such as this is a technique often used in shonen manga to demonstrate to the audience and the characters what kind of state our protagonists must attain if they want to achieve their goals. In this series’ case, this is Lance and Finn (given that Mash can’t use magic), but this is hardly a refined way to do so. A Satoru vs. Sukuna this ain’t.

You can read MASHLE chapter 46 for free via VIZ Media.