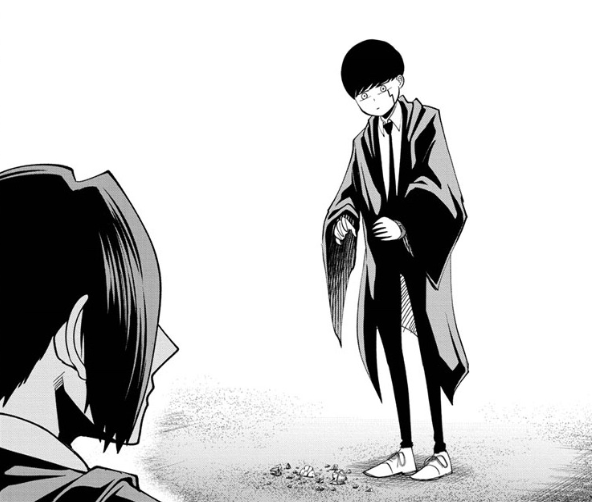 The beginning of a new week can only mean one thing: time for new Weekly Shonen Jump! This is where Jacob investigates the latest and greatest in the magazine, telling you what’s worth your time and what’s not. You can find coverage of other series under the tag Jump Time. Here’s MASHLE chapter 51.

Alongside Witch Watch, one of the biggest surprises in recent Jump history has been how diving into a tournament arc wasn’t such a bad idea for MASHLE, after all. Chapter 48 proved that it could be entertaining despite avoiding the necessity once again of laying out a power system, and chapter 51 continues to do so in much the same way: completely shattering all of our expectations and delivering gut-bustingly funny gags along the way.

Right off the bat, MASHLE chapter 51 gets off to a howler of a start. The next stage of the Divine Visionary examination involves the participants being divided up into teams of three and given special crystals that they must protect from the other teams’ attacks. Whichever team has all three crystals broken will be disqualified, and the last one standing wins, but I don’t think that the organizers ever thought that anyone would drop these crystals immediately after getting them. Nevertheless, that’s exactly what Mash and Dot do.

Much like how Mash smashed through all the rules of the previous round by punching one of the fearsome Deadervants in the stomach and breakdancing until the balloon that held the key popped, MASHLE chapter 51 says to us very clearly in this instance that this isn’t going to be your regular game of tag. Combined with the fact that the team members are actually split up when transported into the arena (something which the series itself pokes fun at) this makes for yet another entertaining round of the Divine Visionary examination that has the potential to grow into next week.

All of this nearly makes up for the fact that the apparent antagonist for this arc alongside Margarette Macaron is quite uninteresting. His name is Carpaccio Luo-Yang of Orca House, and MASHLE chapter 51 actually starts up with a staredown between him and Mash: his elitist philosophy, however, makes him very similar to other antagonists we’ve seen in the past, such as Abel, Orter, and heck, even Lance.

Writing compelling antagonists appears to be one of Hajime Komoto’s biggest weaknesses alongside not introducing a power system, and repeating art, and I’d be very surprised if this got better any time soon. Still, MASHLE chapter 51 was a fun read. In the end, maybe that’s all that matters.

You can read MASHLE chapter 51 for free via VIZ Media.