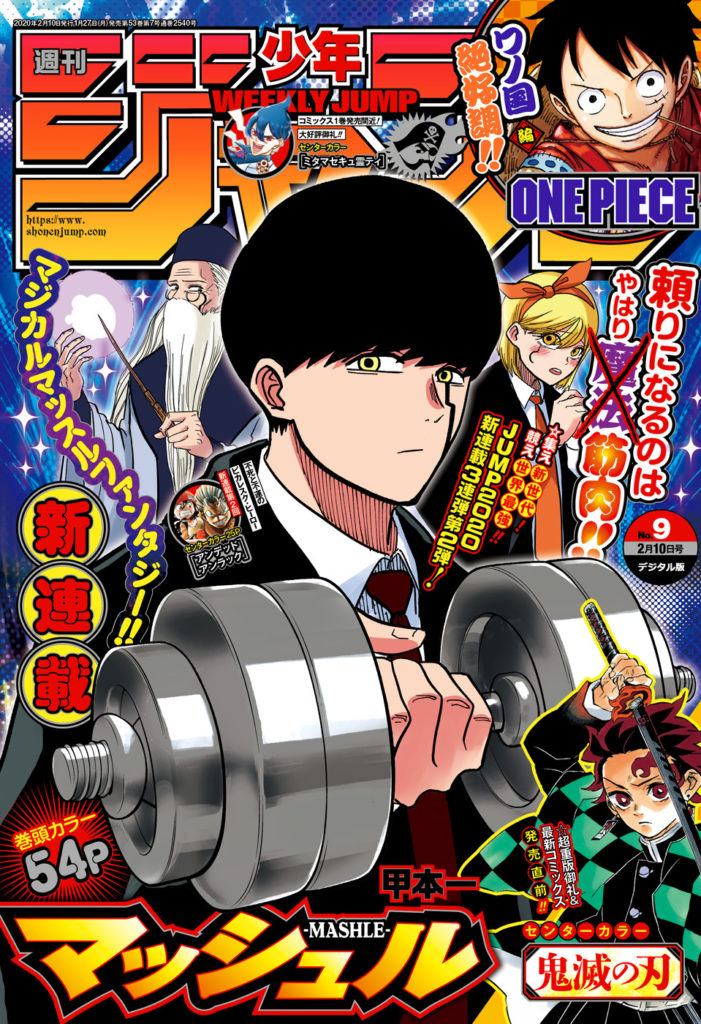 The word ‘ripoff’ gets thrown around quite a lot. Often, it is without justification. One of Weekly Shonen Champion’s newest series SHY, for example, got lambasted by certain people for using the same concept of a ‘world of superheroes’ as My Hero Academia, despite the fact that Bukimi Miki’s world functioned very differently from Kohei Horikoshi’s. Nevertheless, there are cases where the word is applicable. MASHLE appears to be one such case.

Launching back in January of this year, MASHLE: Magic and Muscles is written and illustrated by Hajime Komoto and has released 17 chapters as of the time of writing. Its first collected volume is, in turn, on track for a June 4 release. In general, the series comes at a critical time for the magazine, as properties both old and new leave the roster – including the mega-successful Demon Slayer: Kimetsu no Yaiba. Could MASHLE be Shonen Jump’s next big thing? Probably not.

There are many people who seem to be enjoying MASHLE right now as it releases. That’s a good thing. Most conversation I have seen surrounding it has been positive – some praising its art, some praising its humor, some enjoying its setting. But art is a subjective thing, which is why opinions differ. What I will endeavor to do in this review, then, is best explain why I feel the way I do about the series, while attempting to offer some justification along the way. Here goes.

The main thing that is stopping from enjoying MASHLE is the unoriginality of its premise and setting. Mash Vandead, our protagonist, is a young boy without magical powers in a world where those without powers are actively killed and removed from the gene pool. To save Mash from this fate, his father, Regro, hid him in the woods for many years and forced him to engage in weight training to overcome his lack of magical prowess. 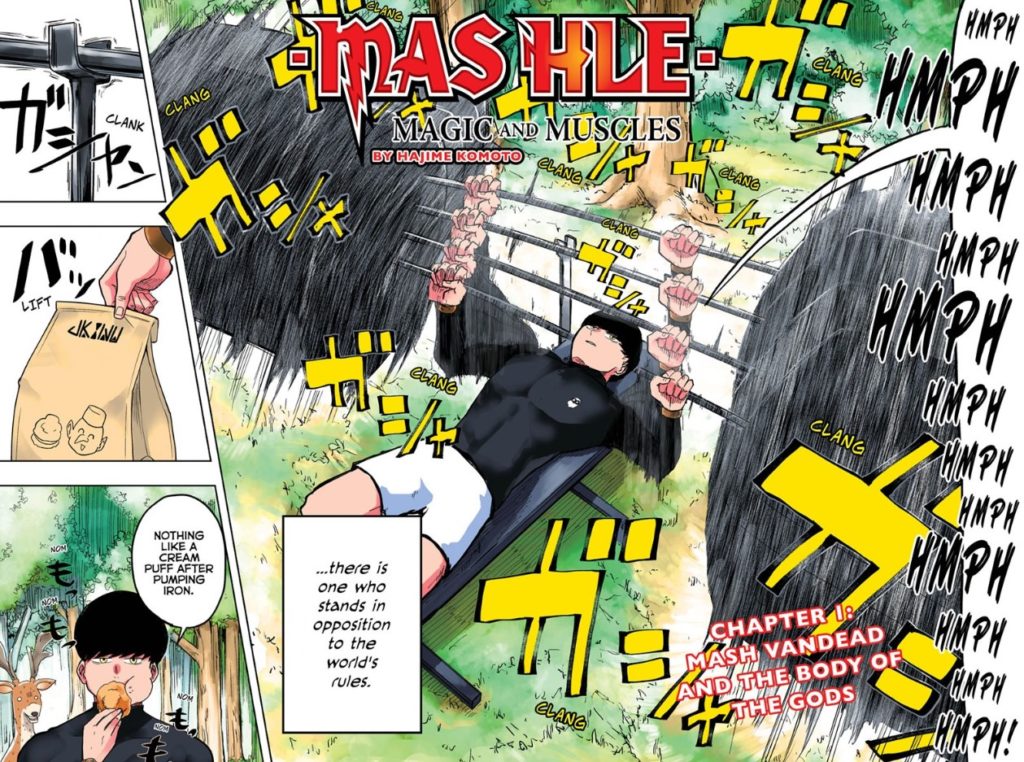 All of these details are, however, just set up for the real premise and setting of the series: Mash’s adventures at Easton Magic Academy. Here, Mash is attempting to earn enough “coins” to become the ‘Divine Scholar,’ which will both allow him to avoid the fate of death and change the rules of this ability-obsessed world.

MASHLE’s premise and setting enjoys many similarities. For starters, SPY x FAMILY uses almost the same structure, except Anya’s goal is not to change the norms of society, but save the world from imperialist war. The idea of working your way up a particular system to change the world is also something that is often used in shonen manga, with NARUTO being one particularly good example.

In any case, the most important comparison you can make with regard to MASHLE is, without a doubt, Harry Potter. The trappings and systems of J.K. Rowling’s fantasy series, and particularly the film adaptations, permeate every pore of Hajime Komoto’s fantasy series: from the ‘House’ system to the sorting ‘dinosaur,’ the Forbidden Forest and broomstick-riding. Without the influence of Harry Potter, it is safe to say that MASHLE wouldn’t be the same. 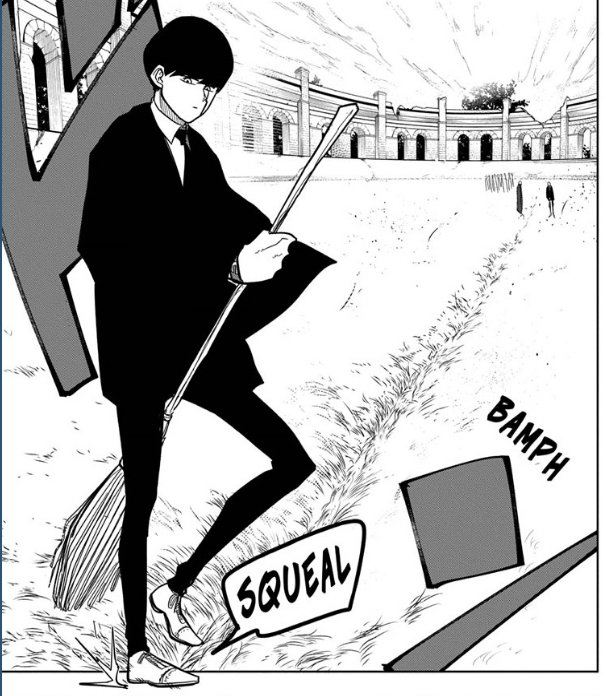 If you like Harry Potter, or are at least comfortable with seeing some of its elements regurgitated in manga form, then you’re in luck. The problem is, however, that I do not like Harry Potter. Perhaps it’s because of my British upbringing, being surrounded by the series and constantly associated with it wherever I go (if I had a dollar for every time someone called me ‘Harry’ simply because I have brown hair and glasses, I’d be a millionaire), but the effect is clear: I can’t get on board with MASHLE’s premise or setting, which makes it very hard to enjoy.

Humour and Art: Saitama and ONE

Premise and setting is not everything, however. Another important aspect of MASHLE is humor, mainly stemming from the ease with which Mash defeats his magical opponents. MASHLE is nominally a comedy series, so you can believe that this happens a lot.

In this respect, MASHLE is also very similar to One Punch Man. Much like Saitama, Mash uses his overwhelming physical strength to break the “rules” of the world and fight scenes in general. But in a much broader sense, there are also clear parallels between Hajime Komoto’s visual style and that of ONE in such series as One Punch Man and Mob Psycho 100: he often uses rudimentary art to sell a joke or reaction, which only works some of the time.

The problem is that Komoto takes the trappings of ONE’s manga and runs too far with them. While one exaggerated expression or simplified reaction (see below) works in isolation, Komoto has the unfortunate tendency to repeat artwork multiple times across a chapter, or often even across a single double-page spread.

This gives the whole series an aura of cheapness, which is a shame given that the author clearly has artistic talent. MASHLE’s character designs are actually rather unique, straying away from the usual realism and into the absurd with their exaggerated proportions and curved limbs. Komoto also clearly knows how to engineer a high-stakes moment: one particular example came recently, when he used a double page spread to highlight the impact of Mash’s blows, before he sat down and asked for more. It was a rare moment of genuine excitement and action which allowed me, for just one second, to step outside myself and into the shoes of those who enjoy this series.

MASHLE: The Limits of Inspiration

As always, the problem with taking such heavy inspiration from other, established series and creators is twofold. The first one is relatively simple. What’s the point in reading MASHLE for a story set in a magical school when I could just read Harry Potter? Further, what’s the point in reading a story where the majority of the laughs come from the protagonist defeating his opponents with ease when I could just read One Punch Man? Without changing up some of these ideas, it becomes a self-defeating proposal.

You could say that one of the definitions of ‘ripping something off’ is precisely taking an idea or a premise and reincorporating it into your own work without changing it or providing proper credit. To a certain extent, MASHLE does precisely this. It reappropriates both the setting of Harry Potter and the humor of One Punch Man without changing that much, although this is not exactly a new phenomena. Manga is a medium that draws inspiration from many different sources, with series like BEASTARS being directly influenced by works that lay outside the medium. So even though you could call MASHLE a ripoff, that term doesn’t exactly seem very helpful. 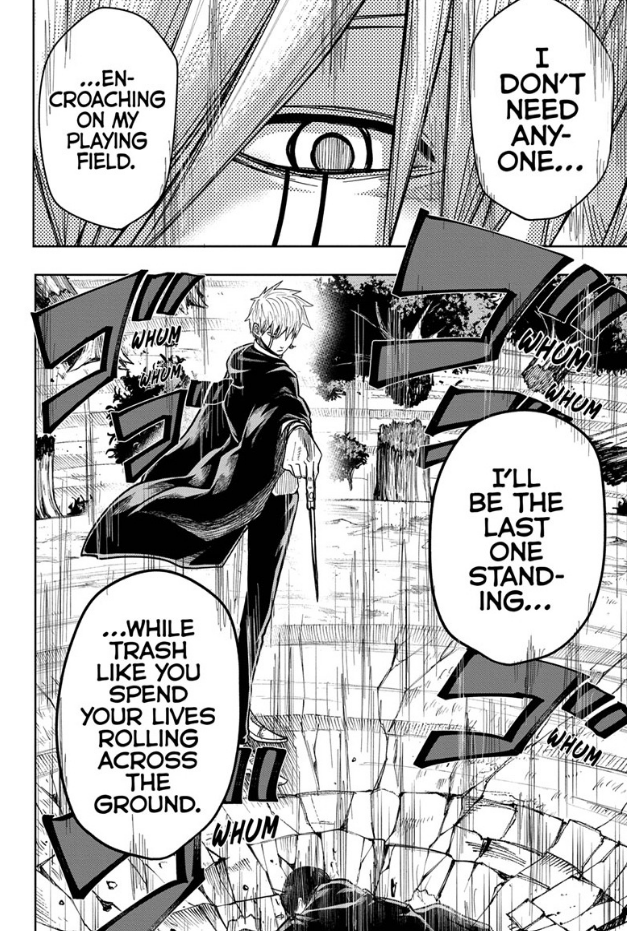 What’s perhaps more constructive is to focus on the limits of being inspired so heavily by outside sources. Herein lies the second problem. Not only does doing so require a certain amount of good faith from readers (you have to actually like Harry Potter, for example), it can be difficult to stray from the beaten path and come up with original material.

Alongside his occasionally unrefined artwork, this is Komoto’s biggest weakness. Most of the supporting characters, for example, are pretty cookie-cutter and usually fall into two categories: they either hate Mash or love him, and those who fall into the former usually end up falling into the later (today’s enemy is tomorrow’s friend). MASHLE’s fights are also predicated on this, as many people challenge Mash on the basis of a grudge against him.

As I said at the beginning, I am aware that most of this review is very subjective. If I liked Harry Potter, then no doubt I would get along much better with MASHLE’s premise and setting. But the series also has very clear weaknesses separate from my personal biases, such as in humor and art. Furthermore, the limits of Komoto’s ‘inspired’ approach reveal themselves whenever he is forced off the beaten path, where he often gets lost and trips over as a result.

There is an old saying that you have no doubt heard many times from your teachers while taking tests over the years: ‘cheating by copying others only cheats yourself.’ That seems apt when examining MASHLE’s place in the Weekly Shonen Jump magazine and what kind of future it may have as a result. Although others seem to be enjoying the series for the time being, its unoriginal approach may end up coming back to haunt it in the near future. Much like Agravity Boys, it hardly seems like something Shueisha should be relying on going forward.

You can read MASHLE for free via VIZ Media’s Shonen Jump.