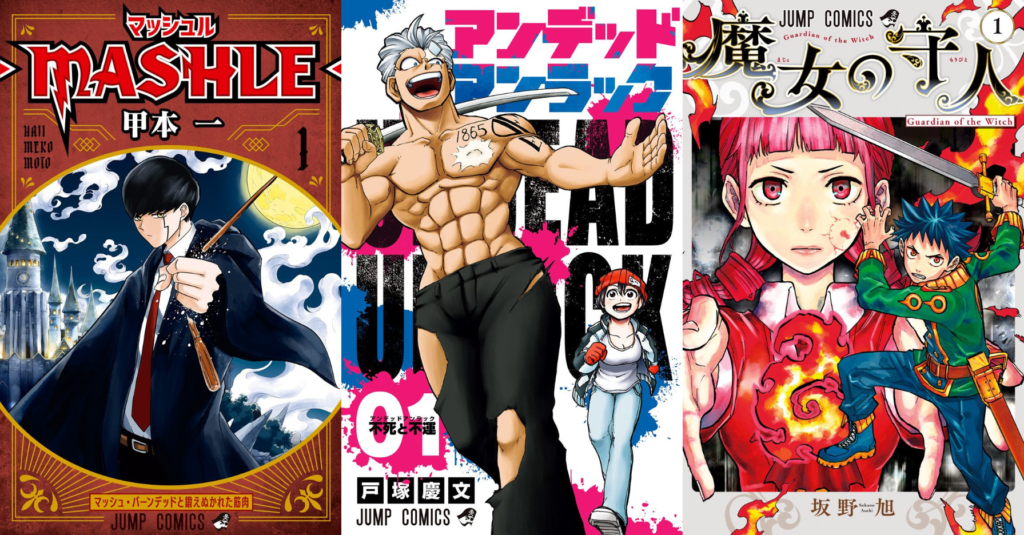 The sales data for the latest Weekly Shonen Jump series are in! Last time we touched upon this prickly world, it was nine months ago, when Samurai 8 sold shockingly low in comparison to series from newer authors. This time, it’s the opposite: while Samurai 8 is no longer with us, a new crop of Jump successes appear to be upon us – spearheaded by the excellent sales numbers of Hajime Koumoto’s MASHLE, which launched earlier this year.

First of all, let’s count down the numbers. According to a handy graphic made by @RaafGL, the sales for MASHLE’s first volume total 31,516 units after four weeks on the market. Meanwhile, the first volume Asahi Sakano’s Guardian of the Witch managed a measly 3000 units before dropping off entirely. Bringing up the rest of the newbies is Undead Unluck, which managed to sell 20,000 units of its second volume before dropping off in the fourth week. 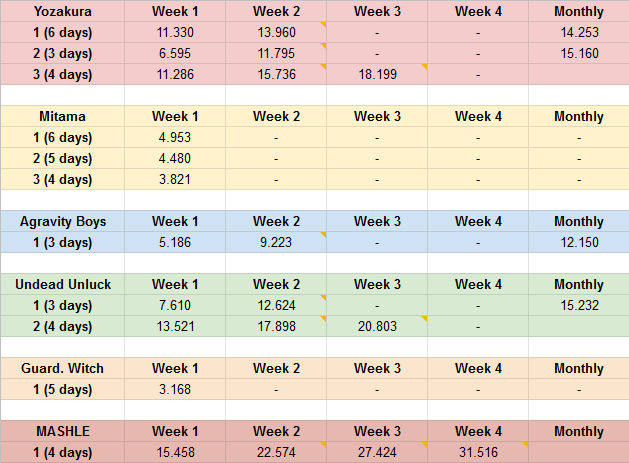 MASHLE’s high sales are certainly surprising, but not entirely unexpected. The series uses the tropes of other, pre-established series and reintegrates them into the format of a Weekly Shonen Jump battle manga, which did not impress me but has impressed others. The failure of Guardian of the Witch, in turn, has been a long time coming: the series failed to develop one whit beyond its initial premise, and recently came to a sorry end.

Undead Unluck’s sales, meanwhile, tell a different story. Its second volume actually managed to sell more than its first, which shows that all of the hype surrounding it from such outlets as Ogiuechiki Session has paid off. The same could be said for Mission: Yozakura Family, which has managed to increase its sales with each volume over the first year of its serialization. That may sound surprising given how bland the series is, but it has clearly found an audience.

But what about Mitama Security and Agravity Boys? The sales bar for comedy series has always been lower than more action-oriented series, but the disparity between the two gag manga seems to suggest that one of them will be on the way out sooner rather than later. Given that Mitama has already released three volumes and that numbers have gone down each time, I’d argue that it may meet that fate.

In any case, MASHLE’s high sales numbers along with Undead Unluck’s steady increase show that these two series have the potential to become powerhouses in the near future. That must be music to the ears of Shueisha, given that they have already lost several high-profile series in the past few months.

Thanks to @RainSpectre for the news tip.