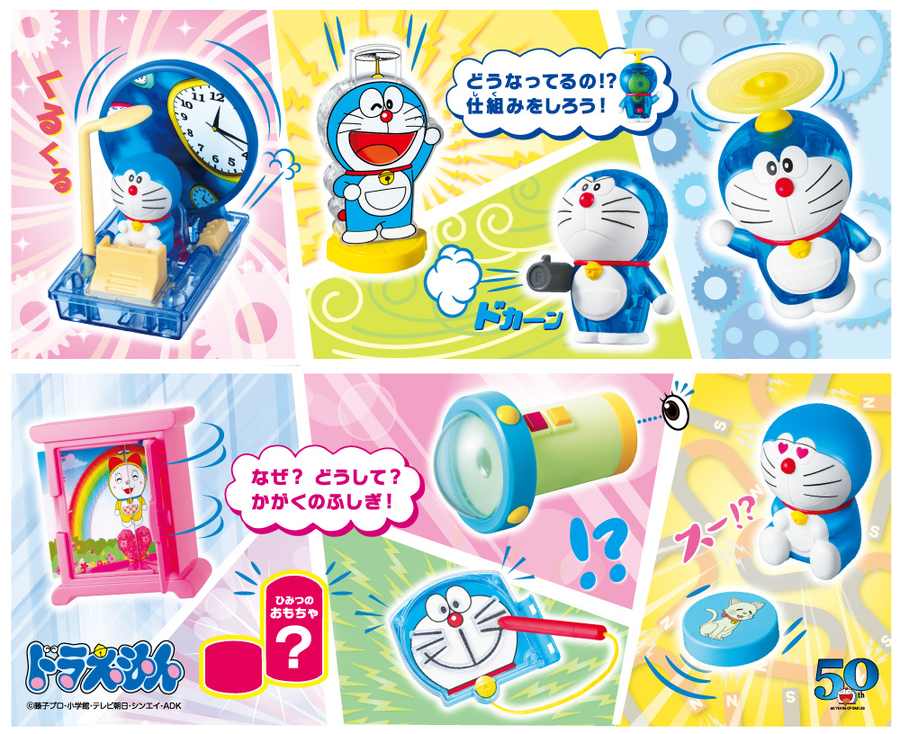 Doraemon’s favorite food may be dorayaki, but the time-traveling robot cat is now selling hamburgers.
From Aug. 14-27, if you buy a Happy Set at McDonald’s Japan, you will get one of four “Doraemon Exciting Science” toys.

After two weeks, the first set of Doraemon items will be replaced.  The second set will be available from Aug. 28 through Sept. 10.

A third set of Doraemon science items hasn’t been revealed yet. The items will be available starting on Sept. 11.

On Aug. 15-16, you might also get a Natsuyasumi Special (Summer Vacation Special) Doraemon DVD when you buy a Happy Set.  McDonald’s Japan’s website notes that the promotion will begin at 5 a.m. on Saturday at their 24-hour restaurants, and there is a limited supply.

Starting on Wednesday, Aug. 19, Doraemon will also be available as a McShake.  All that we know so far is that these shakes will be milky yogurt-flavored with a little bit of lemon juice.

The Doraemon McShakes will also come in special cups featuring each of the main characters — Doraemon, Nobita, Shizuka-chan, Suneo, and Gian.  You have to buy the S size to get them.

The toys and drinks are part of Doraemon’s 50th anniversary celebration.

So What is Doraemon Exciting Science?

The website also contains a bunch of YouTube videos which explain the principles behind the toys. The first set of toys are all see-through, so it’s not hard for kids to understand.

For example, one features Doraemon holding an air cannon, which actually shoots out a blast of air when you push the button on his back. It uses air pressure.

The Take-copter has been a classic Doraemon invention since the very beginning, so naturally two of the toys feature it.  One lets you see the gears which turn the copter on Doraemon’s head.  Another item demonstrates the use of magnets.

The fourth item is a rolling time machine. Once again, you can see all of the little gears.

In the second set, there’s a small flashlight and lens, a magnetic device that lets you draw Doraemon’s face, an Anywhere Door (teleportation device) which uses trick mirrors, and the Doraemon and Mii-chan “mystery of magnets” — Mii-chan is literally repulsed by Doraemon.

A fifth item in the second set is a “mystery item” which won’t be revealed until you buy a Happy Set.

Incidentally, if you don’t like hamburgers or cheeseburgers, there are other options. You can also get Chicken McNuggets, or petit pancakes, which I suppose sort of look like Doraemon’s dorayaki.

Before 10:30 a.m., you can also get an Egg McMuffin or hotcakes.  Each set comes with a main item (hamburger, McNuggets, etc.), a side dish (fries or sweet corn, or hash potatoes at breakfast) and a drink.

This is not the anime cat’s first collaboration with McDonald’s. However, the science part is a nice touch.