McDonald’s Japan will celebrate the 30th anniversary of Mitsuru Adachi’s baseball manga and anime series Touch with a collaborative campaign for chicken sandwiches.

In the McDonald’s ad, the J-pop singer sings about having to choose between two kinds of chicken tatsuta sandwich. (You have to say Touch the Japanese way, Tatchi, to get the tatsuta/ Touch pun.)

If you’ve never heard the original version of the theme song, you can find it at YouTube. Although the series was a huge hit in Japan, it can be hard to find online overseas.

The story features the twin Uesugi brothers and their next-door neighbor, Minami. As the three grow up, something of a minor love triangle develops. There’s also some baseball drama, as the team aims for Koshien, the National High School Baseball Championship of Japan. 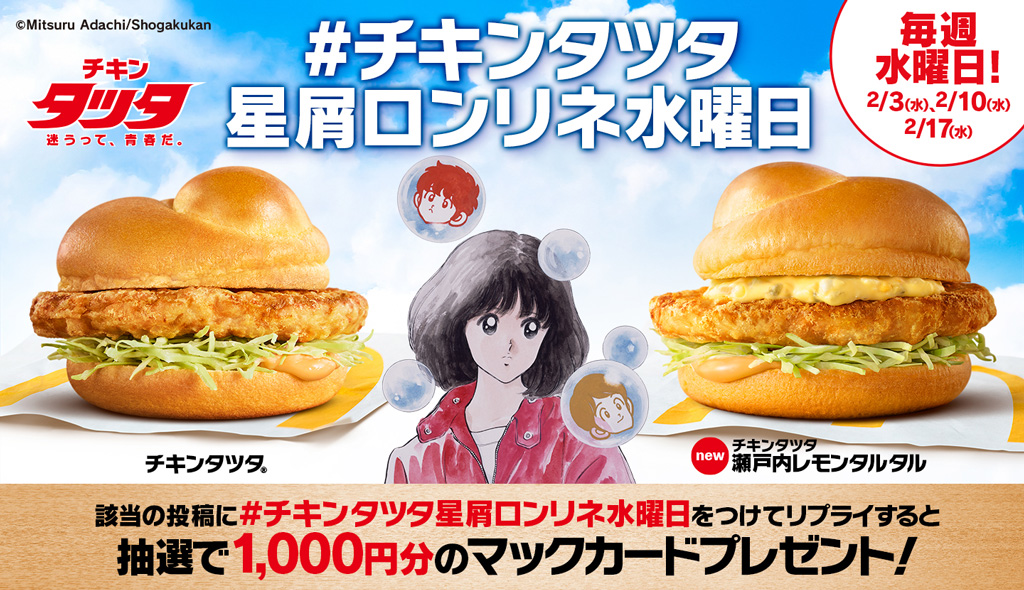 The ads are for McDonald’s version of chicken tatsuta, a Japanese-style soy-ginger soaked fried chicken in a bun. According to the McDonald’s website, they have had chicken tatsuta on the menu off-and-on since 1991. However, this year’s new version adds Setouchi lemon tartar sauce as an option. Essentially, the ads compare the two tatsuta sandwiches to the two brothers. McDonald’s also has hitokuchi tatsuta, a bite-sized version.

The Touch/ tatsuta campaign also includes several Twitter lotteries. If you follow @McDonaldsJapan, and reply to certain targeted tweets with the correct ‘chicken tatsuta’ hashtags, you will be entered into a lottery to win McDonald’s cards.

The sandwiches will be available starting on 27 January.