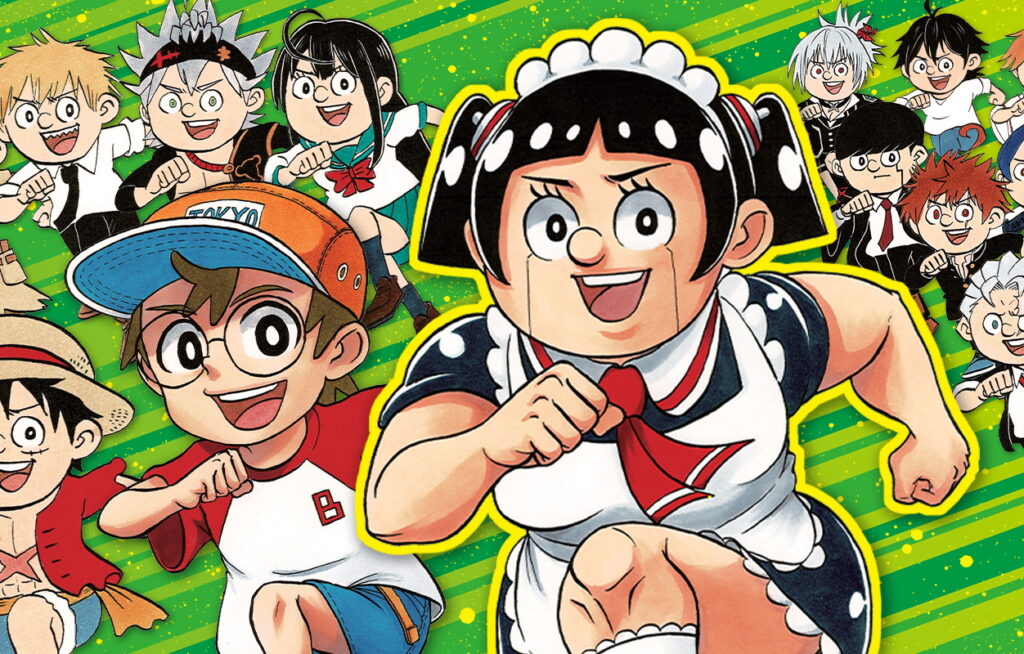 Hello there and welcome to Your Manga Week. Finding time to keep up with all the manga that releases on a weekly basis can be difficult, so I’m here to tell you what’s worth your time and what’s not. We’ll also be discussing the story and arc developments as they come. This week, we’re talking Me & Roboco chapter 1, Hard-Boiled Cop and Dolphin chapter 2, and Mitama Security chapter 43.

Weekly Shonen Jump has a serious comedy problem. Others have been raising the alarm for a while now, but this week’s manga offerings have me convinced. Not only can two out of the four new additions to the magazine’s roster be characterised as gag manga (in this case, series with little or no overall narrative or plot that instead focus on chapter-by-chapter comedy), the number of series with an overly comedic bent appear to be in the majority at this current moment. Of course, comedy has always been an important part of the magazine’s identity, but there is such a thing as too much of a good thing. This week’s column will hopefully explain why.

As the last series to debut in Weekly Shonen Jump out of this current slate, Me & Roboco is undoubtedly saddled with less-than-ideal circumstances. Not only was it preceded by Magu-chan: God of Destruction, it also enters the magazine at a time when comedy series are rife. Undoubtedly, series author Shuhei Miyazaki is probably not entirely happy. Nevertheless, Me & Roboco chapter 1 doesn’t exactly lend credence to the idea that it may have succeeded under different circumstances.

First impressions may get a diehard Jump fan on side, at least for a little while. The series’ cover illustration is wonderful, featuring protagonists from every single Jump series and rendering them in the style of its title character, Roboco. There’s also a moment in Me & Roboco chapter 1 when Roboco is caught reading Jujutsu Kaisen, exclaiming “domain expansion” in a nod to Gege Akutami’s popular ongoing series. 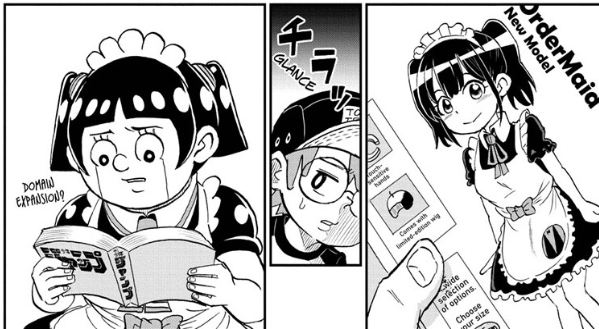 For fans of Weekly Shonen Jump, any references to the magazine’s larger presence and the series that run in it are incredibly satisfying. That is the reason why Shueisha can put on such events as the ‘Otona no Jump Sakaba,’ which weaponize nostalgia and the Jump brand for commercial purposes.

Even so, this can only go so far; series cannot keep going on past memories and brand recognition alone. The failure of both Boruto and Samurai 8 prove that. At a certain point, Me & Roboco chapter 1 needed to demonstrate why it was worth a place in the already-crowded magazine.

Unfortunately, that moment never came. Unlike with Magu-chan’s initial chapter, I didn’t laugh once when reading Me & Roboco chapter 1. In fact, several moments had me cringing: the repeated illusions from the protagonist’s mother that she would be “getting it on” with his father, for one, as well as the many jokes made at the expense of Roboco’s masculine appearance. Most of the humor fell flat, and some of it even felt in bad faith. 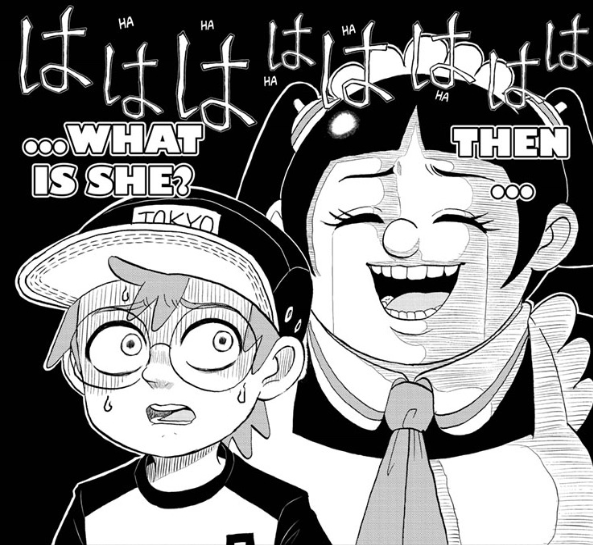 Probably the only thing that Me & Roboco chapter 1 has going for it is its ending. The premise of the series essentially revolves around the protagonist, Bondo Taira, wanting to buy a super advanced robot maid. Yet, his family is too poor to do so, so his mother ends up ordering a cheap, second-hand one. Fast forward through the antics, and Bondo realizes at the very end that Roboco isn’t even a robot maid – what, then, the hell is she?

If this was a set up for Me & Roboco to go straight down the rabbit hole and become a psychological horror series, then I’d be all for it. That seems far-fetched, however. For all intents and purposes, this is yet another gag series in the Weekly Shonen Jump roster – and one that fails to make a very good first impression. Given the serious glut of comedy series in the magazine at the moment, I wouldn’t be surprised if this was the first to go – at least, after Mitama Security, that is.

Before we discuss Mitama Security chapter 43, however, it’s perhaps worth comparing Me & Roboco chapter 1 to the first chapter of Hard-Boiled Cop and Dolphin. Ryuuhei Tamura’s new series definitely made a much better first impression than Shuhei Miyazaki’s ever did, and it did set up several interesting plot threads that are being developed here with Hard-Boiled Cop and Dolphin chapter 2. While other series in the magazine right now may be under the threat of cancellation, this definitely isn’t one of them. 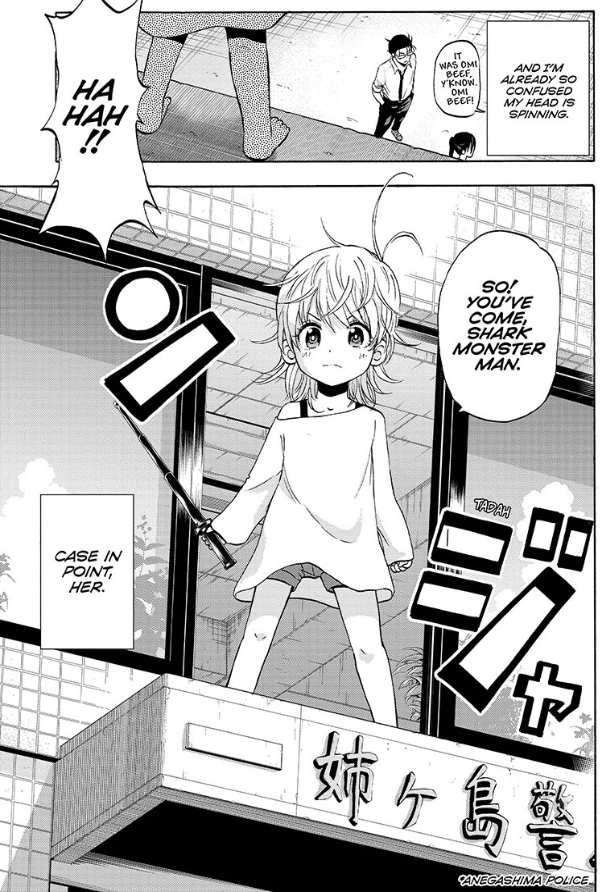 The first moments of Hard-Boiled Cop and Dolphin chapter 2 bring back something that fans of Beelzebub may appreciate. In Tamura’s last successful series (Hungry Marie only lasted for four volumes), one of the main characters was the demon child Kaiser de Emperana Beelzebub IV, or Beelzebub for short. In both the series and the marketing for it, the character of Beelzebub played an important role as a sort of mascot, embodying the series and iconifying it. The way that Orpheus’ daughter, Chako, attacks Samejima at the beginning and generally wreaks havoc throughout this chapter seems to position her as a similar sort of character, especially given her diminutive stature. Let’s hope that this helps to shore up the series’ prospects in the long term.

In any case, there are other aspects to Hard-Boiled Cop and Dolphin chapter 2 that also prove compelling. Once the comedic antics are out of the way, the chapter moves into more structured territory: after receiving an emergency call, Samejima and Orpheus head out to deal with a bomb threat, only to discover that the perp is not a human, but a shapeshifting octopus. 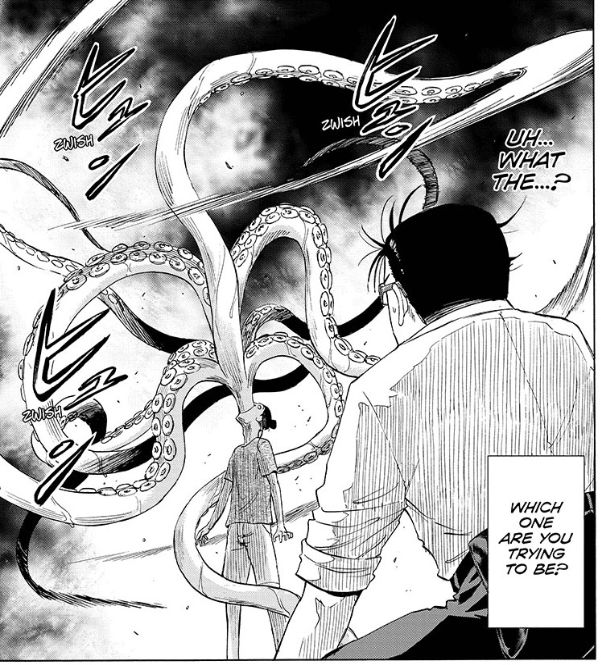 This development may sound pretty wild, but it was, in reality, foreshadowed by the debut chapter’s initial moments. The notion that we know only a fraction of what lies beneath the sea surface is developed in Hard-Boiled Cop and Dolphin chapter 2 to include the fact that Anegashima is the “front line” in the “war against ocean crime,” which presumably means more foes like the shapeshifting octopus man in the future.

Honestly, I’m convinced that Hard-Boiled Cop and Dolphin may stick around simply because of the amount of unique ideas that it is throwing at the wall right now. A police comedy, a mystery involving a cult, and action scenes involving shapeshifting maritime opponents. Truly, there is nothing else like this running in Weekly Shonen Jump right now, which is more than you can say for something like Ayakashi Triangle.

Furthermore, if the series continues along the lines of the sealife-based police procedural that Hard-Boiled Cop and Dolphin chapter 2 seems to suggest, then it may be able to differentiate itself from the rest of the Jump line-up. Although it is certainly comedic in nature, it isn’t exactly a gag manga, which may help it avoid the circumstances that hampered Me & Roboco chapter 1’s chances, to some extent.

I already mentioned Mitama Security chapter 43 in passing while discussing Me & Roboco chapter 43 and Hard-Boiled Cop and Dolphin chapter 2, but now we can finally tackle it head on. It may surprise you to hear that I believe that this chapter is the strongest indicator yet that Tsurun Hatomune’s gag series should get the axe when I have consistently batted for it in the past, but hear me out. If any comedy series should make way for the new ones that have joined the magazine over the past couple of months – Agravity Boys and MASHLE included, by the way – then it should be this one.

That is not to say that Mitama Security chapter 43 is a bad one. Far from it. This week’s chapter follows Rena Haze as she grapples with the impending threat of a parent-teacher conference, as her mother tends to set her impossible goals and chastise her for her below-average grades. What follows is a fairly textbook piece of comedy writing: a premise is established, which escalates, building into a final punchline and a satisfactory climax.

In the case of Mitama Security chapter 43, it’s all about additional characters. Starting off with Mitama, the number of people participating in the conference builds and builds, eventually encapsulating the series’ entire cast. This finishes off with an effective double-page spread that functions at once as the climax and the punchline. What’s there not to like? 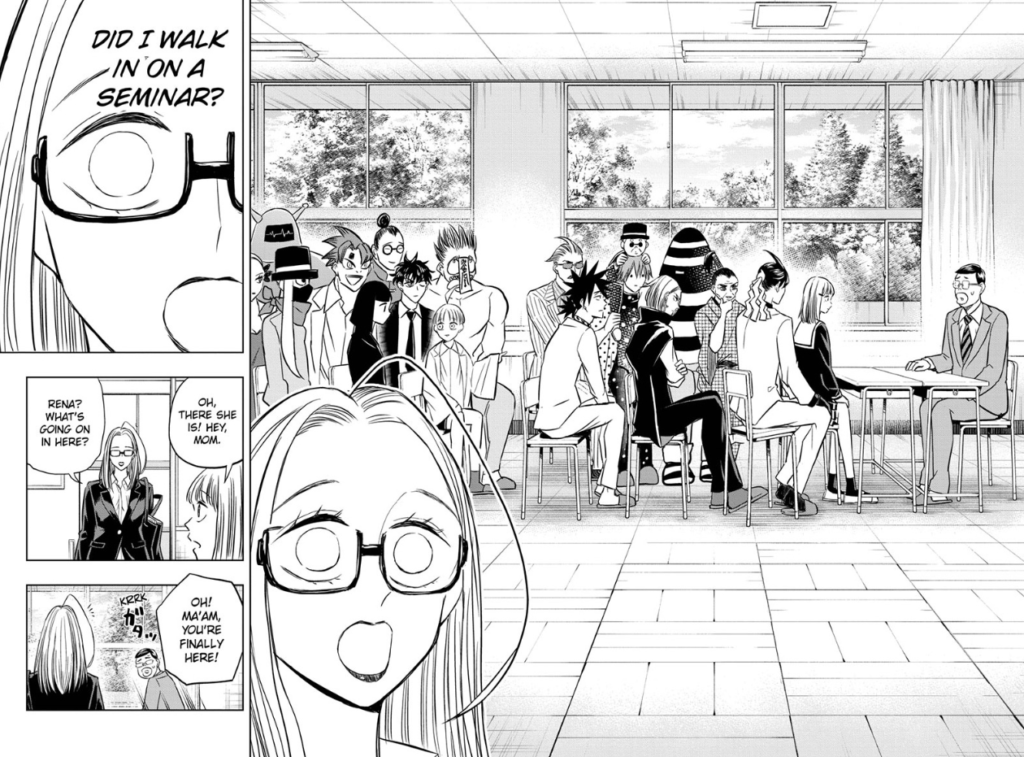 Well, a couple of things. Firstly, it’s a little weird when Rena asks Mitama to “be her dad” when it has been strongly suggested in the past that she may have romantic feelings for him. This just makes the idea of a high schooler falling in love with an older man that much weirder, which probably isn’t Hatomune’s aim. Secondly, although the build-up and development of the central gag is executed well, it isn’t exactly something we haven’t seen before; it’s one that’s been used multiple times in the past, only this time featuring more characters.

On the whole, Hatomune’s writing feels like it has grown sluggish in past weeks. Coming down from the drama and the excitement of the “Mitama disappears” storyline, the series has spent most of its energy in past weeks on a frankly unfunny gag surrounding Mitama’s “Holy Spirit Man” form. This is humor of the lowest variety, and has annoyed me greatly for the past couple of chapters.

Thankfully, Holy Spirit Man only makes one brief appearance in Mitama Security chapter 43. Yet, his shadow makes it clear to me the idea that this series deserves to be cancelled sooner rather than later. That is not to say that I have not enjoyed the series – far from it – but that if anything has to make room for new ones, this is the prime candidate. It may have been a good ride, but all good things must come to an end.

You can read Me & Roboco chapter 1, Hard-Boiled Cop and Dolphin chapter 2, and Mitama Security chapter 43 for via VIZ Media’s Shonen Jump.