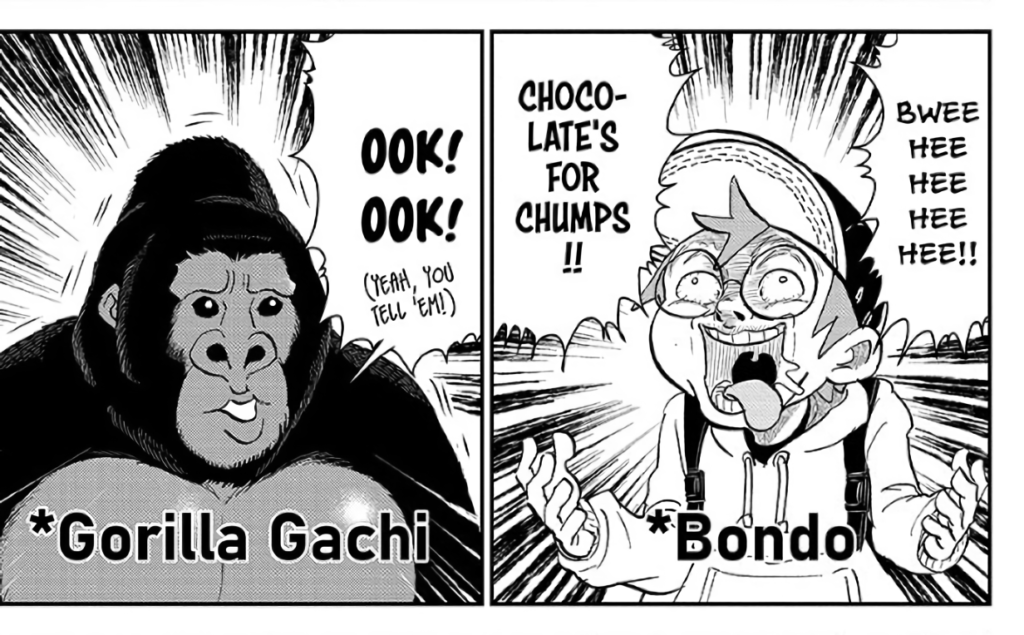 The beginning of a new week can only mean one thing: time for new Weekly Shonen Jump! This is where Jacob investigates the latest and greatest in the magazine, telling you what’s worth your time and what’s not. You can find coverage of other series under the tag Jump Time. Here’s Me & Roboco chapter 29.

Don’t get me started on Valentine’s Day. Don’t even get me started. At the end of the day, it’s a fake holiday made up by the big corporations designed to get you to buy chocolate, roses, and other useless rubbish just like Christmas and Halloween, at least in the modern sense. And before you ask, no, it’s not because I’ve never received anything for Valentine’s Day: that has nothing to do with it! I wouldn’t even want anything, anyway!

Anyway, Me & Roboco chapter 29 is quite funny.

Much like myself, Bondo isn’t really that bothered about Valentine’s Day, but he decides to check his desk anyway just to see if anything has been placed in there. Wouldn’t want to break school rules by hiding any sweet treats, after all. He also arrives at 6 a.m. just to make sure no one’s up to any funny business. It’s his turn as the class representative, after all. 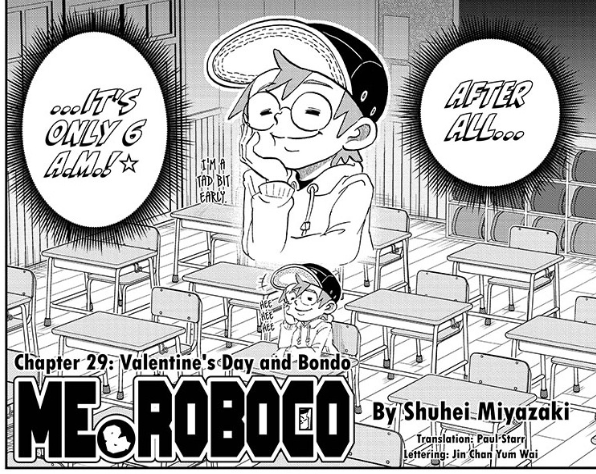 This opening gag is our first taste that Me & Roboco chapter 29 is going to be very good, exploring as it does the contradiction between the false bravado of our male characters and their deep-seated desire to receive something, anything, on this special day; even if they don’t show it. This leads to several funny moments, such as when Gachi turns into an actual gorilla out of sheer envy.

Even funnier is how Gachi and Bondo promise each other that they ‘don’t need no stinkin’ chocolate’ and declare themselves to be the ‘no-chocolatiers,’ but Bondo quickly abandons that stance once he receives a surprise summoning in his shoe locker. Still, he’s not scummy enough to betray his friend and pass off Urahara’s chocolate for Gachi as his own: he convinces her to give it to him herself instead. This leads to a heartwarming ending where Roboco, Madoka, and the other girls turn up at the school gates, late because they’ve been making chocolate for the boys. By the end of Me & Roboco chapter 29, Bondo fulfills his dream of getting chocolate from someone other than his mother, after all.

That being said, one of my main problems with Me & Roboco chapter 29 is the entire concept of a grade schooler really being that preoccupied with Valentine’s Day. Perhaps this is a cultural difference between the UK and Japan, but I wasn’t even aware that the event existed when I was 10: I was too busy playing Sonic and watching Doctor Who. Much like other chapters in the past, it seems as if Shuhei Miyazaki doesn’t have a very strong grasp on what motivates an elementary schooler. Instead, he inserts what motivates him: girls and manga. Sometimes it works, sometimes it doesn’t.

Even so, I’d be lying if I said I didn’t have a couple of chuckles while reading Me & Roboco chapter 29, and it even shone a light on what I would do if I was offered a shred of hope on Valentine’s Day. Just like Bondo, I’m sure I would go back on everything if I could eat just one piece of chocolate. The problem is finding someone to give me some!

You can read Me & Roboco chapter 29 for free via VIZ Media.