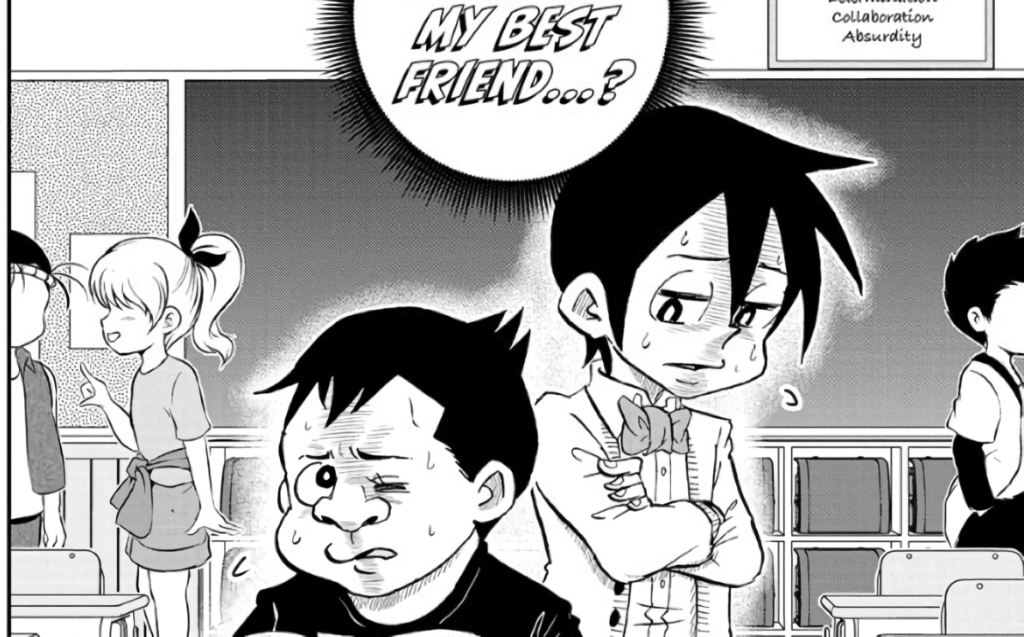 The beginning of a new week can only mean one thing: time for new Weekly Shonen Jump! This is where Jacob investigates the latest and greatest in the magazine, telling you what’s worth your time and what’s not. You can find coverage of other series under the tag Jump Time. Here’s Me & Roboco chapter 32.

‘We’re best friends, right?’ That’s the question that Me & Roboco chapter 32 tackles, filtered through the false bravado of young boys and mutual misunderstandings. It’s a chapter that at once reveals the strength of Shuhei Miyazaki’s writing, and how this is held back by the series’ usual comedic bent. My relationship with this series has always been complicated, but this just complicates it even further.

To be honest, Me & Roboco chapter 32 reads less like a chapter of, well, Me & Roboco than it does Kaguya-sama: Love is War. It delves deep into our two main characters’ (Motsuo and Gachi) inner monologues and their psychological mind games, all over the very simple admission that they are best friends, which they are. It seems like a stupid problem, but one that I relate entirely to.

Speaking purely personally, I couldn’t help but read Me & Roboco chapter 32 and wince just a little bit, as it called me out on my own inability to accept and validate meaningful relationships with others. Is this reading a bit too far into a stupid series about a funny robot maid? Probably, but the ways in which this chapter differs from all the others published thus far makes it clear that Shuhei Miyazaki’s writing can more than stand up to scrutiny.

While previous chapters have relied on big, over-the-top gags, and absurd humor, Me & Roboco chapter 32 is comparatively tame and naturalistic. It revolves purely around the clash of two personalities and even uses some high-level linguistic trickery: many of the ways in which Motsuo and Gachi try to trick each other into admitting that they are best friends revolve around kanji that are read in the same way (shinyo). Obviously, to the Japanese reader this is pretty basic stuff, but anyone reading in English who got the jokes definitely has a certified Big Brain.

I almost wish that Me & Roboco focused less on bombastic humor and more on character-based comedy, because chapter 32 proves that Miyazaki can do it quite well. Still, it seems as if this series is always destined to be hit-or-miss, regardless of what particular mood the author is in week to week.

You can read Me & Roboco chapter 32 for free via VIZ Media.