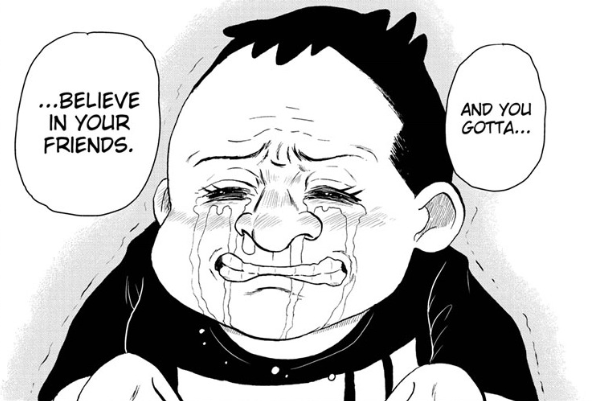 The beginning of a new week can only mean one thing: time for new Weekly Shonen Jump! This is where Jacob investigates the latest and greatest in the magazine, telling you what’s worth your time and what’s not. You can find coverage of other series under the tag Jump Time. Here’s Me & Roboco chapter 49.

Right from the very beginning, Motsuo and Gachi Gorilla have skirted the line between caring friend and sneering bully, so seeing how Bondo first became friends with them is an interesting prospect. That’s the question that Me & Roboco chapter 49 explores, showcasing the miracle of friendship along the way.

What makes Me & Roboco chapter 49 particularly remarkable is the fact that it manages to string together a satisfying story without an appearance from the futuristic robot maid named in the title. This is because in order to showcase the origins of Bondo’s friendship with Motsuo and Gachi, it travels back in time to three years before the series began, which is also presumably before OrderMaids became widespread.

Satisfying really is the key word here as Me & Roboco chapter 49 manages to not only chart the rocky start of Bondo’s friendship with Motsuo and Gachi, but also impart a moral lesson to its audience. When our protagonist first transfers to his new elementary school, he immediately hears bad rumors about the two characters: Gachi is said to have killed over 10,000 men, for example, while Motsuo is a powerful figure in the underworld. The fact that they’re reading a copy of Jump, however, is enough for Bondo to go over and talk to them. 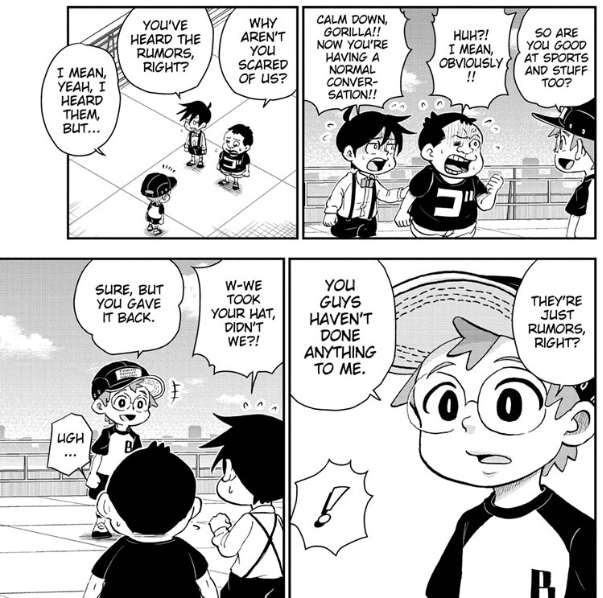 When Motsuo and Gachi press Bondo as to why he isn’t scared of them, he points out that ‘They’re just rumors.’ Besides, they haven’t done anything to him, so the proof’s in the pudding. It takes until the very end of Me & Roboco chapter 49 for this message to really get through to Gachi and Motsuo, when they try to trick Bondo with the hunt for a tsuchinoko. Bondo’s erstwhile belief, however, saves them and absolves them of their previous sins.

If any younger readers are reading Me & Roboco chapter 49, then this teaches them not to always believe in rumors and try to see the best in people. I’d say that’s a pretty good lesson, to be honest, so this should be filed alongside chapter 32 as further proof that Shuhei Miyazaki has no need to rely on outlandish gags. He can do proper character-based drama, but he just prefers to do the former. For whatever reason.

You can read Me & Roboco chapter 49 for free via VIZ Media.