While this goes for most industries, the art industry, and by extension, fanart, have quite the history under their belt.

When you think about it, the art of expressing oneself through drawing, painting, making jewelry and sculptures, etc. technically goes way back to prehistoric times, shifting from something universal to heated internet debates on artwork being for leisure vs. a luxury item.

Not to mention the ongoing debate on monetizing one’s craft to begin with.

Nowadays, “big name” companies do their best to strike a balance between leisure and luxury so that they may appeal and profit from different consumers and fan bases.

Medicom’s Kubrick-inspired Bearbrick line of collectibles is one such product.

As the brand’s name implies, Bearbrick (also stylized as “[email protected]”) consists of blobby teddy bear-shaped figurines of different sizes that often incorporate the aesthetics and iconography of famous artists in addition to original designs.

Medicom Toy Inc. debuted their first bear-y cute collectible for a character convention in 2001, a product that turned out to be a hit and would further build on the original Kubrick mold. Needless to say, this writer does prefer Bearbrick to its predecessor, even if some of the human designs fall flat.

Speaking of human, the Kubrick mold is more humanoid in that it resembles Lego and Playmobil figures. In a similar vein to Funko Pop! Figures and Good Smile’s Figmas and Nendoroids, Bearbricks act as an “official” line of uniform pop culture memorabilia.

As much as I prefer Good Smile’s products over Funko Pop! figures, I think Bearbricks make use of the latter’s greatest strength, simplicity.

Bearbricks take the mobility of the former (albeit limited to Lego/Playmobil proportions) and the latter’s compact, round shape language for well-rounded appeal.

A select few have been made in different sizes in the past, but these five are the sizes most widely available on the market. If keychains are more your thing, you can also find scaled-down versions of some of the simpler Bearbrick color schemes and patterns.

Or, if you’re the practical type, you can check out their unique Cleverin collaboration.

Aside from this, Bearbricks come in a variety of materials and themes. While most of the figurines are plastic, a handful do have fuzzy, metallic, or wooden surfaces. Each series is made up of 11-18 figurines that adhere to one of eleven themes (i.e Basic, Jellybean, Pattern, Flag, Horror, Sci-Fi, Cute, Animal, Artist, and Hero).

Though most of these themes are self-explanatory, I’ll clarify the key difference between “Basic” and “Jellybean” as well as what “Artist” and “Hero” entail.

Basic Bearbricks are monochromatic with one of the nine letters in the “[email protected]” logo printed on their torsos (thus encouraging consumers to buy the figurines in sets) while Jellybean Bearbricks are a single, translucent color with no lettering.

As for the other themes…

The “Hero” category used to only consist of DC characters (one of Medicom’s relatively new Bearbricks being Harley Quinn from the Suicide Squad/Birds of Prey universe), but has since extended its reach to Marvel heroes.

And rest assured, anime fan favorites like the Mr. Osomatsu brothers, Naruto, and Pop Team Epic’s Popuko and Pipimi are a given.

The “Artist” category features the art styles of people such as artist and designer KAWS and entrepreneur Nigo of BAPE fame. Having grown to love KAWS and Nigo’s work over the past few months, I’ll be taking a look at both of their Bearbrick designs later on.

However, Bearbricks are not for the faint of heart. In fact, they’re sold in…blind boxes.

I happen to be a sucker for collectible toys such as Tokidoki’s Unicorno line.

I don’t love that they come in blind boxes, but I 100% see the appeal in Bearbricks and Unicorno being gachas. It’s a wonderful feeling, unboxing a target figurine and/or being surprised by one you didn’t even know you wanted. With that said, purchasing a specific figurine via a proxy service or online stock market can get real expensive, real fast.

As much as I like collecting fandom-related merch, I’d have to think long and hard about buying a Bearbrick over something similar in the Funko, Unicorno, etc. price range.

Though, when it comes to “Artist” Bearbricks, I can see how a BAPE or KAWS figurine would be desirable considering the way the art industry runs on luxury items.

Bearbricks at least feel more approachable in their presentation. Yes, they’re expensive, but anything that can normalize art being for everyone is welcome in my book.

And nothing screams “for everyone” like mainstream media and subverting said media in fun ways that are easy to grasp.

So without further ado, let’s take a closer look at the BAPE and KAWS figurines as well as a few personal favorites. 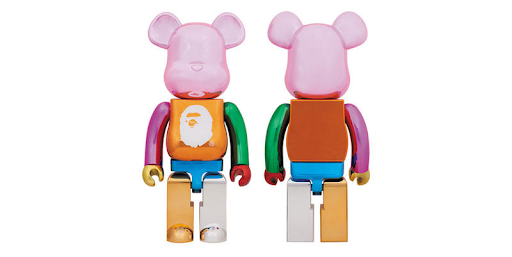 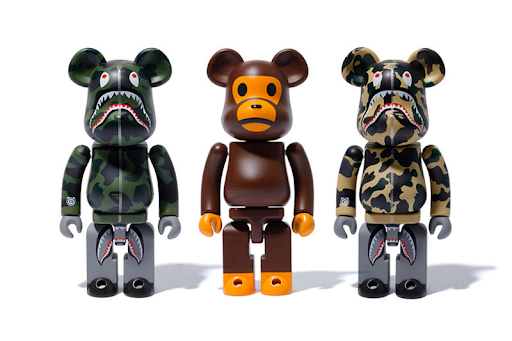 Having written an article on Nigo before, I’ve become familiar with his oft minimalist and sometimes “noisy” style making strides in streetwear to this day.

Nigo’s former BAPE brand (short for “A Bathing Ape”) is known for its bold lines, cartoon imagery, and solid colors, and the BAPE Camo Shark Bearbrick is no exception. On the other hand, the Multicolor Foil XXV Bearbrick sports different colors in glossy “patches,” some even on the softer side for streetwear.

I think both designs have their strengths, but I was personally more taken with the latter for its abstract, less aggressive vibes. If anything, the Multicolor Foil XXV Bearbrick is a design Nigo fans would see represented in one of his current brands, HUMAN MADE.

However, I do quite like the BAPE Bearbrick based on Nigo’s original mascot Baby Milo.  I’m not even fond of monkeys, fictional or otherwise, and find Baby Milo’s design cute. I mean, who could say “no” to that blank face? 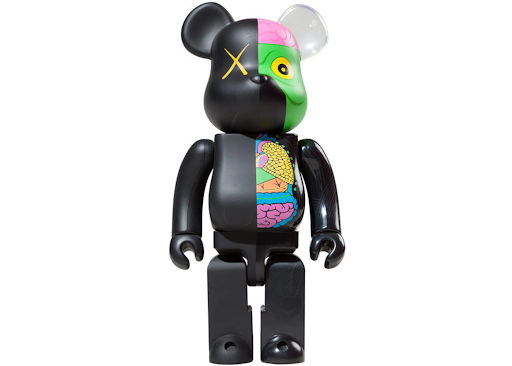 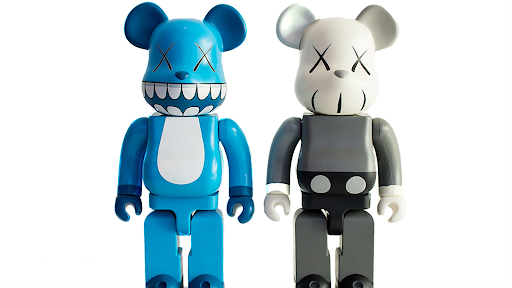 While writing my piece on KAWS and his more recent collaboration with Uniqlo, I took a deep dive into the man behind the name, Brian Donnelly, and his charming art style.

The KAWS Bearbricks incorporate Donnelly’s signature x-eyes to give his characters of choice a bit of an edge. They’re a perfect mix of cute (which the Bearbrick mold itself no doubt helps) and morbid that proves unique enough to draw in numerous fans.

The Dissected Bearbrick’s black color scheme serves as a solid contrast to its exposed half without the whole package looking too grotesque.

The blue Chomper/Chompers and fake Mickey Bearbricks best demonstrate Donnelly’s respect for traditional 2D art. The linework on their faces are simple, but expressive. 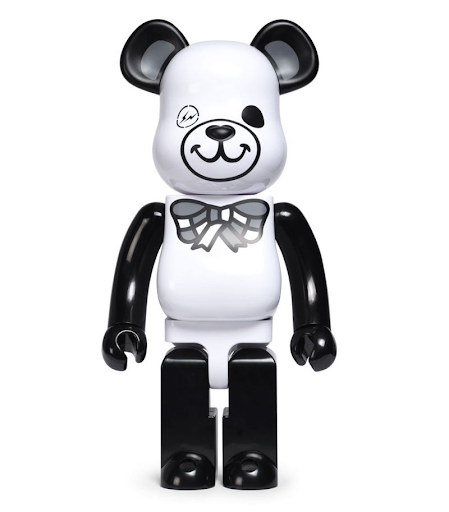 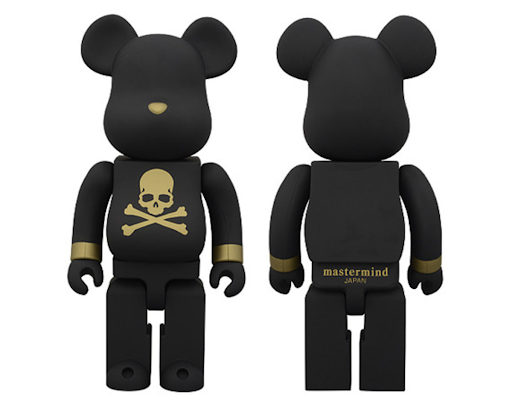 In selecting a few non-BAPE/KAWS designs that also deserve the spotlight, I’d first like to reiterate the importance of simplicity.

It’s not as if BAPE’s “noisier” designs don’t fit the concept at hand, but when handling a product like Bearbricks (that tend to be no taller than 1½-3”), those in charge of pitching ideas should be wary of overcomplication.

In other words, collaborative work should keep an artist’s style as well as the plausibility of replicating this vision in mind. Not every style translates well to a teddy bear-shaped medium, after all.

Which is a long-winded way of saying, less details sometimes work better.

The black-and-white Freemasonry x Fragment Bearbrick based on musician-producer Hiroshi Fujiwara’s Fragment brand resembles a panda with creative logo placement. I’m impressed by how much the Bearbrick having a bow tie manages to bring the ensemble together.

The Mastermind Japan Bearbricks, the black ones in particular, are even “cleaner” with an emphasis on their distinct lack of eyes and gold (or silver/white) accents. 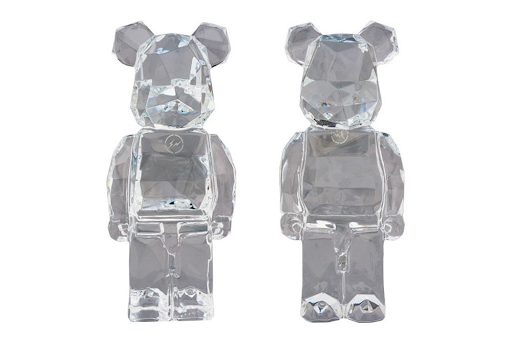 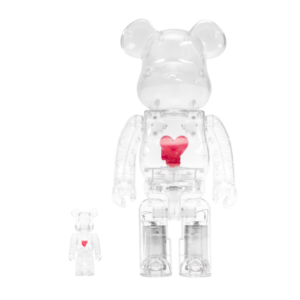 As far as Bearbricks with stylized textures go, the crystal-like Baccarat x Fragment and Emotionally Unavailable Heart figurines with its mechanical limbs are especially lovely. 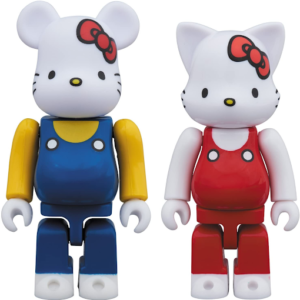 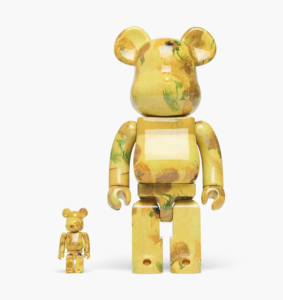 Lastly, my favorite Bearbricks among those modeled after popular iconography are the Hello Kitty and Van Gogh Sunflowers figurines.