Origins of ‘Megalo Box’ Revealed in ‘Ashita no Joe’ Exhibition 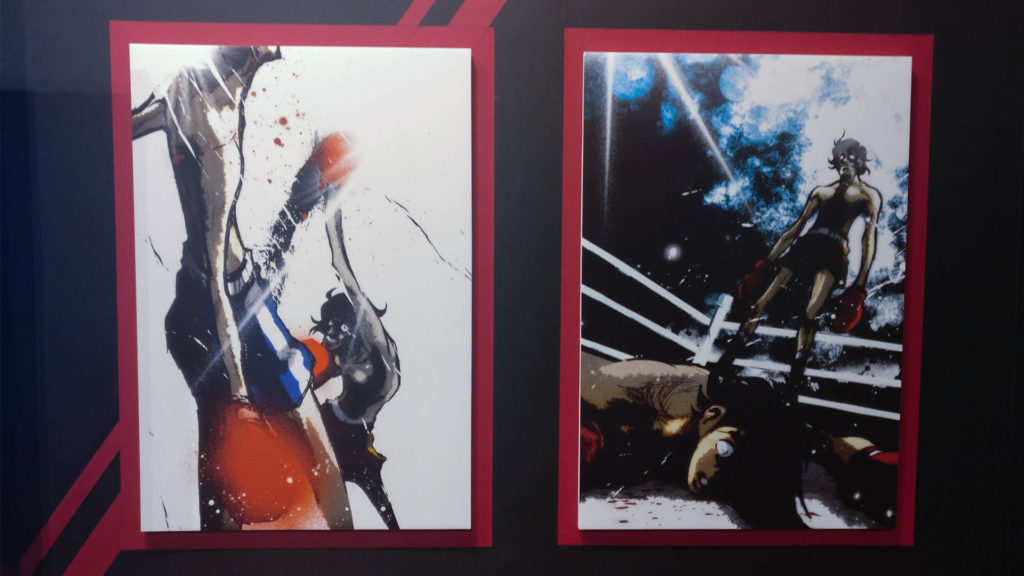 Currently airing Ashita no Joe 50th anniversary project Megalo Box is being well received both in Japan and in the West — but did you know that the project wasn’t originally planned as a futuristic reimagining of the legendary boxing series? I recently attended the Ashita no Joe 50th anniversary exhibition which is currently taking place in Tokyo Solamachi, next to the Tokyo Sky Tree, until May 6.

The exhibition mainly featured original manuscripts used for the Ashita no Joe manga, as well as animation cels and scripts used in the various Ashita no Joe anime series adaptations. Lining the walls of the exhibit, you’ll also find messages from Asao Takamori’s fellow mangaka, and even professional boxers, congratulating the series on its incredible fifty years. There was even a little something penned by the eminent Go Nagai for the series.

With all that being said, what was perhaps most interesting was the small part of the exhibition dedicated to the new Megalo Box anime series, which as mentioned prior exists to celebrate the Ashita no Joe 50th anniversary. As to be expected from a series exhibit, the script for the first episode along with various reference materials were all there, but most shocking of this all was director Moriyama You’s comments on the origin of the modern series.

According to the comments shared, once Moriyama You began planning an Ashita no Joe 50th anniversary anime project, he and his team had many discussions and came up with many ideas; one of those even consisting of a spinoff series based around Rikiishi Toru, Joe’s fated rival and lifelong friend. I’d take a stab in the dark and suggest this would be set before he and Joe met in juvenile prison, but that’s entirely just speculation on my part. They were actually so into that idea that they did several pieces of frankly awesome concept art, which you can see a couple of below: When actually talking about the Megalo Box series itself, Moriyama stated that he wanted to create a character like Joe Yabuki, a character who you could understand and cared about beyond simple empathy. I’ve always wondered what the relationship between the series and Ashita no Joe was since they’re so different in both setting and style, but it seems like the only real tie between the two series is their objective – creating a ‘real’ protagonist, who can better touch the hearts of the audience.

Right now only four episodes of the series have been released as of the time of writing, but I’m already in love with it. It follows the story of Junk Dog, as he fights his way up the world of ‘Megalo Boxing,’ a futuristic version of boxing which utilizes exoskeletons. You can check it out on Crunchyroll.

other OTAQUEST Editors 7 months ago