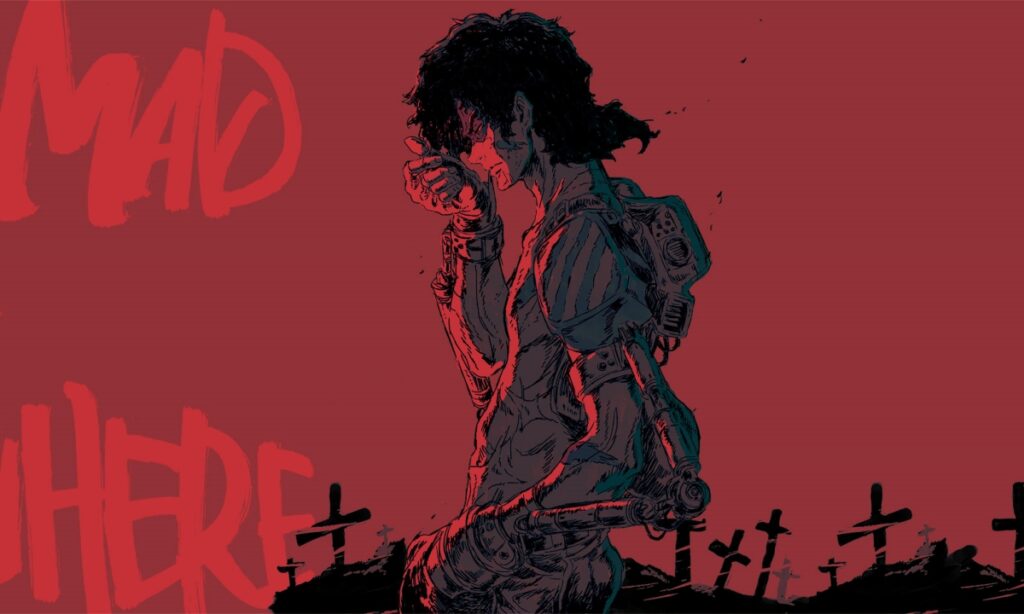 What happens after the champion has been crowned? That’s the question Megalobox 2: Nomad, the anticipated follow up to the 2018 anime Megalobox, asks. This sequel hits us with a more intense, grittier tone than the previous season. A question any good story or follow up has to ask is this: how does its main character evolve after his first adventure?

Things are different this time around for the man once known as Gearless Joe. He was once on top of the world, having won the Megalonia tournament without a Gear and defeating the former champion and his rival, Yuri. Seven years later, he’s become a shell of his former self, rocking longer hair and a scruffy beard. He fights in underground matches and wanders from ring to ring to make ends meet, drinking heavily and taking painkillers to get through the day. 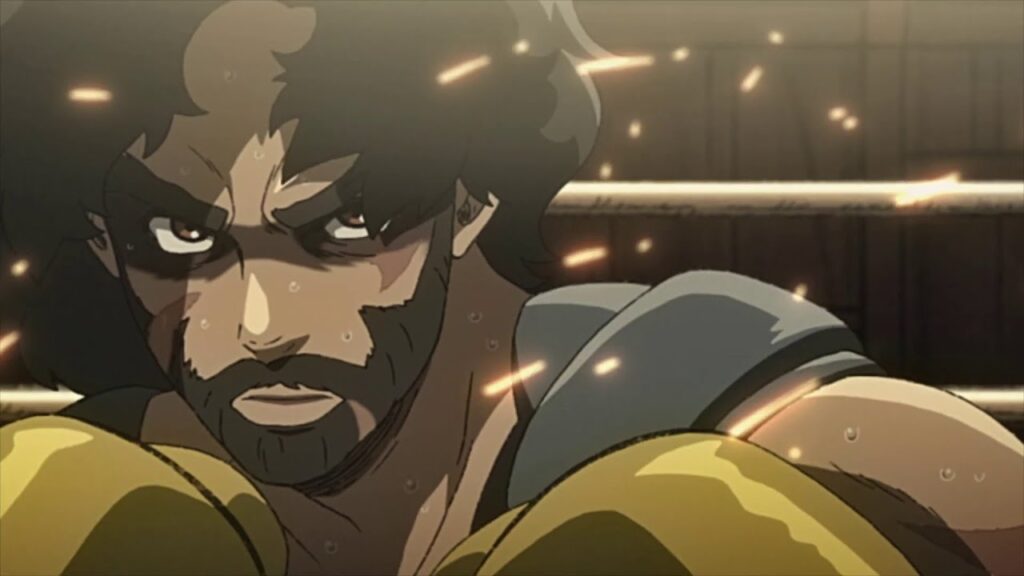 Megalobox itself is a modern remake of the classic boxing franchise Ashita no Joe. In the first season, we see an underdog rise to the top. Judging from Nomad, we’ll see the underdog tumble to the bottom and claw his way back up. The first episode doesn’t reveal what happened since the end of the previous season, but I expect more details later on. Through some limited exposition and TV clips, we know Joe has since disappeared from the public eye after his defeat in a certain exhibition match. These hints at Joe’s past are crucial to understanding how he ended up as ‘Nomad’ and why he abandoned everything from his previous life.

I appreciate how the episode effectively shows how far Joe has fallen. A heartbreaking moment in particular is when we see him pick up and take his painkiller pills that fell on the washroom floor. It’s also interesting to see how he still talks with his manager throughout the episode, who I suspect might be an illusion because of Joe’s guilt and regret. 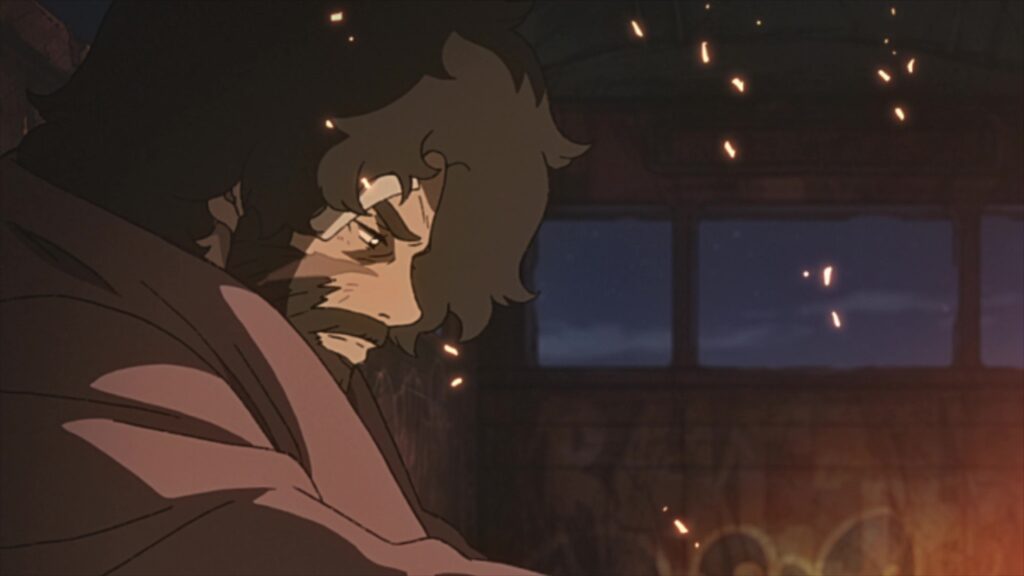 Production wise, mabanua once again delivers a stellar soundtrack with a nice Spanish song played during the end credits. The animation from TMS Entertainment still evokes the blood, sweat, and tears of the intense boxing matchups between Joe and his opponents. Moreover, Megalobox 2: Nomad still uses that grimy, scratchy dirty filter used in the previous season, which reminds of how older anime were animated back in the day.

Joe has always been a scrappy underdog and the sequel keeps to this persevering spirit. Joe’s morals are suspect at best, but he still has his pride, and fights with all he’s got, no matter the outcome. If he’s got his back against the wall, he refuses to give in easily. Additionally, he doesn’t participate in any fixed fights, and when he is unwillingly roped into one, he gets furious. Despite his jaded personality, Joe still holds to his values and won’t settle for a cheated outcome. 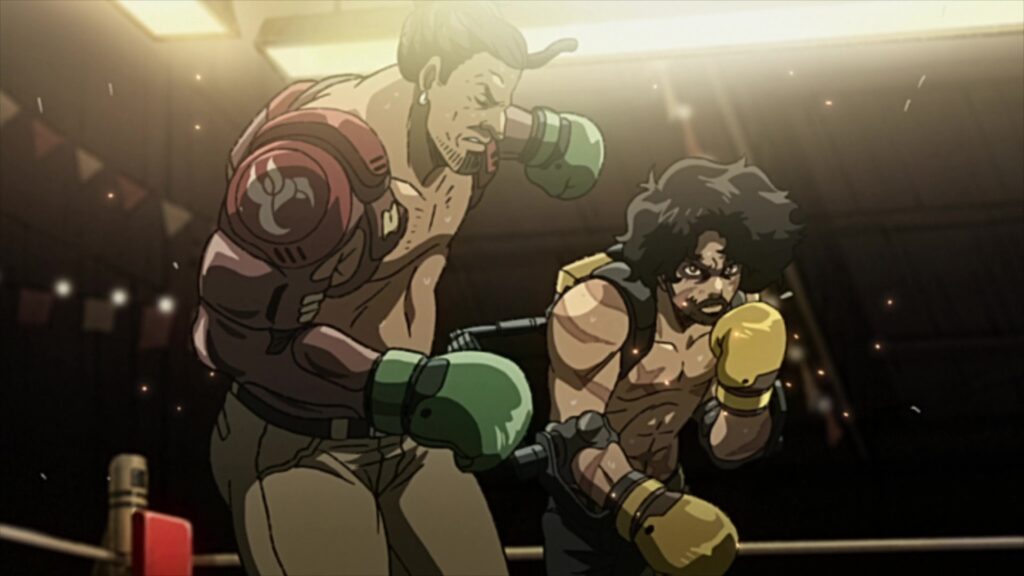 The Spanish title of the episode roughly translates to ‘The ghosts hum a requiem.’ It’s a haunting title to say the least, suggesting that the person who Joe was in the past is dead and no one is mourning the loss. Our champion is down, but there’s no question he’ll get back up and strike again. After all, who doesn’t love a good redemption story?