If you keep up with fighting games or perhaps visual novel games, you may know of Melty Blood. Otherwise, you believe it’s just an anime fighting game that launched on Steam in 2016. The truth is that this is a game that initially debuted in 2002 and has been supported in different versions since then.

But why would a 2002 game receive an official localization in 2016? What does this have to do with visual novels? Why is the name so long? The answer to all of those questions begins by looking at how the series came to be.

A Sequel to Tsukihime, A Visual Novel by Type-Moon

Type-Moon should sound pretty familiar to fans of visual novel games and anime-watchers alike. While they have a decent number of works to their name, they’re mostly known for the immensely popular Fate/stay Night series. Those that are familiar with the series probably know what to expect in terms of violence when it comes to other series.

The other work they’re well known for is Tsukihime. Those that are familiar with the violence present in the Fate/stay Night series should probably know what to expect with this series as well. Between 1999 and 2000 it was released in various forms at Comiket, a famous fan convention (the largest in the world in fact) that features various dojin-related works. It would become a successful work for the company with much praise aimed at its writing. 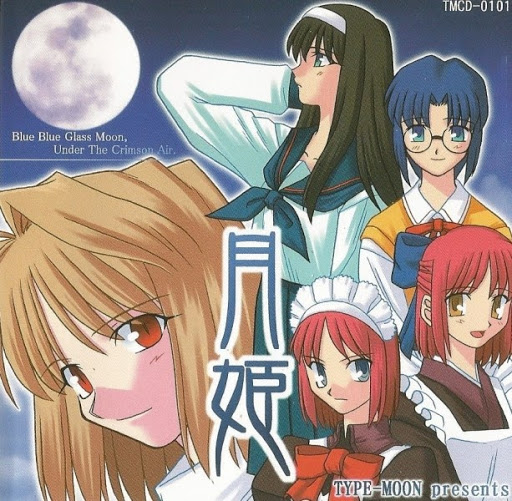 Tsukihime’s popularity would also lead to an anime and manga being made for it. The anime adaptation would see mixed reviews and absolutely scathing reviews from fans to the point that it’s a common saying in the community that “a Tsukihime anime does not exist.” Conversely, the manga adaptation of Tsukihime would be held in much higher regard within the fandom.

In addition to the above, the series would come to see a sequel of sorts that takes place a year after Tsukihime. Acting as a mix between a visual novel and a fighting game, the co-developed project between Type-Moon and French-Bread was released in 2002 as Melty Blood.

Collaborating With French-Bread To Make A Beloved Fighter

Some of you might recognize developers French-Bread. Beyond being the name of a wonderful food item, they’ve also had a history of other fighting games under their belt. One of them is Dengeki Bunko: Fighting Climax, which sees a crossover of characters from light novel series published under Dengeki Bunko. Some of the popular series included are Sword Art Online, A Certain Magical Index, and The Irregular at Magic High School

Another work from them and the arguably more popular one is Under Night In-Birth. The confusing name usage of latter updated versions is enough to compare it to the Melty Blood series. Thankfully, the incredible gameplay is as well.

Melty Blood provides its players with a lot of options, although a lot of them would be added with later versions. On top of the typical mechanics such as EX moves (moves that drain the super bar or “magic circuits” in this game), it also has a parrying mechanic and a “Heat Mode” that regenerates recoverable health. 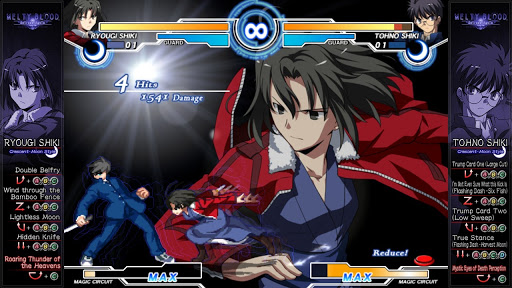 The most unique element in the game is Reverse Beat. While most fighting games restrict tight-knit combos to follow levels with an increasing order of strength (i.e. light to medium to heavy attacks), Melty Blood allows for characters to combo from stronger to weaker attacks. This, along with other mechanics, would find themselves tied to various fighting styles in the final iteration of the game.

And that isn’t all that the game is known for. It’s sprites, animations, and most especially its OST is seen as a high point by the community. It’s not hard to be entranced by the visuals and audio of the game.

The localized version of the game is the most up to date version and is titled Melty Blood: Actress Again Current Code. Newcomers to the series won’t need to worry about previous versions but their curiosity may lead to confusion. The following should break it down in a concise way for those that want to know.

Melty Blood Re-ACT is considered an expansion to the original game that was released in 2004. Beyond adding an arcade mode that features a brand new story that happens after the base game, it also added new characters and made changes to both the characters and the mechanics. An update released the following year, Re-ACT Final Tuned, added more controller configuration options to make it more accessible and capable of emulating the arcade gameplay of the parallel released Melty Blood Act Cadenza.

Melty Blood Act Cadenza was, excitingly enough, a 2005 arcade port of the game. In 2006 an updated version of it would release on PlayStation 2 and be the series’ first release on console. An even further updated version would be released on PC in 2007. Overall it added new characters, new mechanics, new modes, and changed some of the art and animations.

2008 would see the arcade release of Melty Blood Actress Again, which followed the previous games with a new story and new characters. The gameplay would see a significant overhaul by giving each character three fighting styles: Half Moon Style, Crescent Moon Style, and Full Moon Style. The first two correlate with updated versions of previous fighting styles (due to changes through each iteration) while the last one is typically seen as a brand new playstyle. It would release on the PlayStation 2 in 2009 and feature various new characters, modes, and stories.

This version brought the updated content of the PlayStation 2 to arcades, along with balance changes and new special effects. Although this would be the final named version of the game, it would unsurprisingly not be the most up to date version.

An upgrade/update would be pushed out in 2011. This new update would be called Melty Blood Actress Again Current Code Ver 1.05 (or more commonly and easily simplified to Ver 1.05). It introduced small changes and an older boss character with brand new animation, fight styles, and her own story.

That wasn’t it for 2011 though. Ver 1.07 would release later on with changes and additional moves for characters, along with additional story events for some characters. This final version would also bring back a boss character who was taken out with the first iteration of Current Code, and provide her with new animations, moves, and her own story.

That just leaves one final hurdle you’re likely to come across if you research into the game. The PC release of Current Code was released as part of a limited edition for the Blu-ray release of Carnival Phantasm, an anime adaptation of Type-Moon’s gag manga, Take-Moon. As the PC version came with online multiplayer, this is where the community for the game thrived.

Even after the servers for this version of the game closed, fans would keep it open through their own “community edition”. The rollback netcode that fans added to the game would make it especially popular as it was seen as better structured than other fighting games on the market. 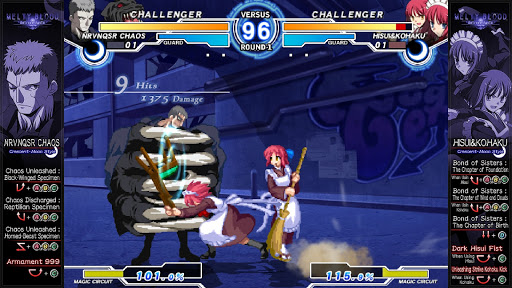 The version of the game that was released on Steam in 2017 was positively received for being an official localization. Additional features such as the lobby system were similarly appreciated, but the online has been criticized for having problems. The community mainly separates it follows: the Steam version is a wonderful way to support the developers and for playing at tournaments, while the original Community Edition is simply a better way to play the game otherwise. Whichever version(s) you decide to play is up to you.

Even as a game that began in 2002 and received updates for nine years, there isn’t a fighting game like Melty Blood. If you enjoy Under Night In-Birth or find yourself at all curious about this game, I certainly recommend giving it a shot. It’s easy to jump into, has a high skill ceiling, and best of all it has a wonderful community that’s more than welcoming to new players. There isn’t much more you could ask for.