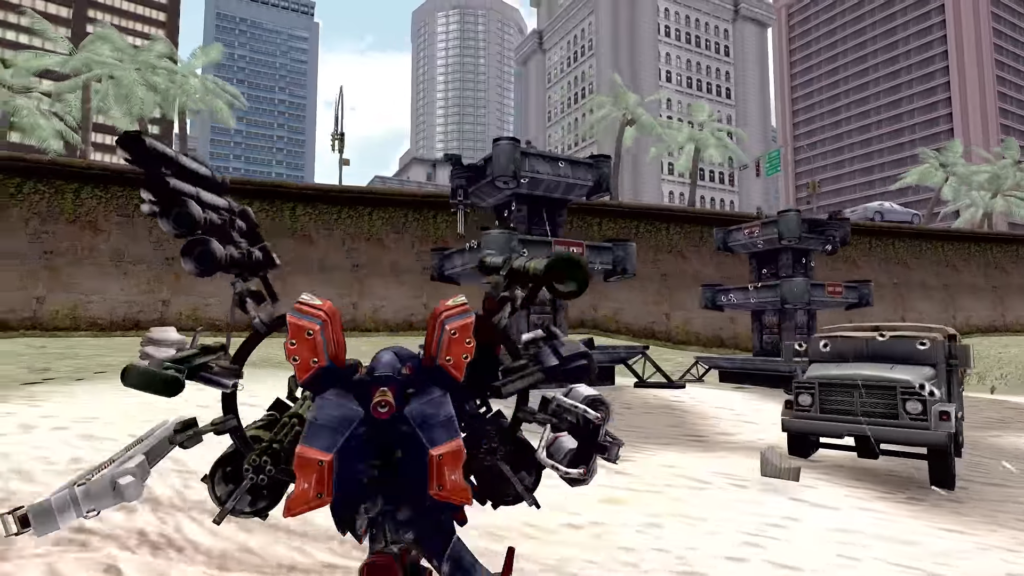 What do you think of when you hear the name FromSoftware? You probably tense up, feeling the blood starting to boil as you remember the hundreds of times you’ve died in Bloodborne or when you realized your character build in Dark Souls wasn’t going to work out. Maybe you’re a die-hard fan who just adores everything they put out, or just heard of them for the first time because you love Game Of Thrones and heard about this little game George R. R. Martin’s involved with. Maybe, just maybe, you remember a little franchise called Armored Core. Regardless, you have a chance to see a completely different side of the game studio with the August 6 release of Metal Wolf Chaos XD.

The original Metal Wolf Chaos, released on the Xbox in 2004, is something of a gem that never quite made it outside of Japan. For many years, it’s been something of a gaming white whale, with cult audiences hip to its brand of madness. In the game you play as the President Of The United States who’s piloting a mech to fight the Vice President Of The United States who’s leading a rebel army. This was made way before the Trump era, to clarify it is a fictional president and vice president and was inspired by the likes Metal Gear Solid.

U.S. games publisher Devolver Digital started formally expressing interest in releasing the game in 2016. Conversations started with FromSoftware and the two companies have been working together to remaster and re-release this holy grail. On August 6 Metal Wolf Chaos will release on PC, Xbox One, and PS4 for 25 bucks. Sorry Switch owners, although that price isn’t so bad. Having never played the game, I can speak to how it controls and aspects like that, but all the footage I’ve ever seen makes the game look completely bonkers, in the best way possible.

Metal Wolf Chaos XD will release on August 6 for Xbox One, PC, and PS4.