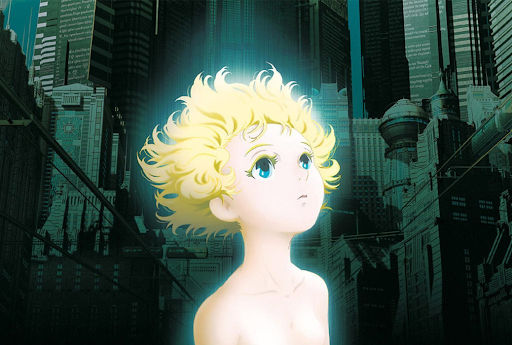 Metropolis is an anime film that probably flew under a lot of people’s radars, even those who consider themselves fans of “Father of Manga” Osamu Tezuka’s stories.

It isn’t your typical anime film associated with an ongoing series nor is it related to any of Tezuka’s more popular works such as Astro Boy and Black Jack. The film that would come to be known as Metropolis (2001) started out as the second entry in a science fiction trilogy Tezuka wrote and published during his time at medical school.

Metropolis was loosely inspired by an older German sci-fi silent film with the same name (1927) that broke ground in it being one of the first feature-length movies of the genre.

And when I say “loosely,” I really do mean it. Tezuka hasn’t even watched the film prior to writing but was drawn to its dystopian imagery nonetheless.

Which makes the parallels in the theme between the film adaptation of Tezuka’s Metropolis manga (by Tezuka Productions) and the German film quite a coincidence.

The eponymous futuristic city of Metropolis is practically a world all on its own.

At first glance, it looks the part of a hierarchical, male-dominated society made up of an uneasy mix of humans and robots. And for the most part, it is. 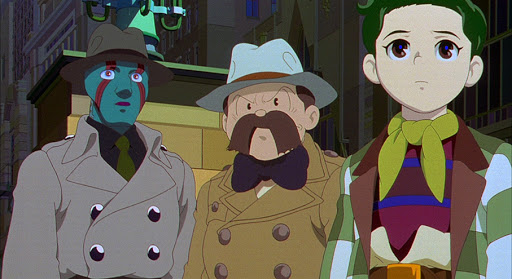 While exploring our reliance, or rather, our overreliance on technology and our tenuous bonds as a people via human-robot stories is considered cliche by today’s standards, it obviously still proves effective. We experience new innovations, new phones, and robot stories in the form of movies, television shows, and video games year after year.

Metropolis’ human-robot relations are established through both the heroes and villains’ treatment of lead robot Tima as well as the protests and unrest sprinkled throughout the film.

The movie opens with two plot lines, one centered on Detective Shunsaku Ban and his nephew Kenichi investigating an organ trafficker named Dr. Laughton, and that of Metropolis’ unofficial ruler Duke Red announcing his plan for “human domination” of the planet. The plotlines collide the moment Kenichi and Shunsaku confront their target, only for the trafficker to be killed by Duke Red’s adoptive son, the deadly, robot-hating Rock.

In the midst of this chaos, Kenichi meets Tima, the trafficker’s greatest creation, a robot commissioned by Duke Red to resemble his deceased daughter.

The key to Duke Red’s plans.

Kenichi and Tima are separated from Shunsaku, giving them ample time to bond in the lower levels of the city designated for machines and robot workers. Their friendship is ultimately born from dramatic irony as neither character has any inkling who, or what, Tima is. Their innocent talk of, well, learning to talk, provides most of the film’s levity as Duke Red, Rock, and Shunsuke race to find the pair.

The movie ends with Duke Red reclaiming Tima, only for her to be shot by a disguised Rock and driven insane upon learning of her true identity as a living weapon. Consumed by existential grief and rage, Tima attempts to destroy the city by linking herself to its “mainframe.” The ensuing struggle causes her to fall to her death despite Kenichi’s best efforts to save his friend.

However, the story doesn’t quite end there.

The end credits include a lovely series of images in which Kenichi finds Tima’s remains, repairs her, and runs a workshop with her by his side once more.

A happy ending on all fronts…except for the fact that Tima is given nothing to work with within the confines of the movie.

While the film adaptation of Metropolis has more in common with the German film than Tezuka’s original manga in that it deals more with class inequality, the former’s portrayal of Tima is a completely different matter.

In the manga, Tima is originally “played by” a flying, gender-fluid (and gender-swapping) robot named Mitchi whose reason for destruction lies in their lack of parents. As much as I like the idea of Mitchi and what their portrayal does for Metropolis’ theme of identity in general, I think Tima’s femininity makes for a more clearcut, and disturbing, analysis.

As mentioned earlier, there are very few female characters on-screen aside from Tima. As such, Tima is also the only female character whose origins receive any screen time. However, due to being a newly “born” robot, our deuteragonist speaks very little and has no choice but to learn how to express herself from Kenichi.

Luckily for her, Kenichi is a compassionate boy who remains devoted to his friend and newfound love to the bitter end, but this does not lessen the blow that is Tima’s lack of agency and power until the moment of her breakdown. This narrative choice makes the scene hit hard when it does go down, and yet, it does Tima a serious disservice.

After everything she’s subjected to, Tima’s self-realization and thirst for vengeance feels justified, satisfying even.

For a film set on critiquing the inequality between humans and robots, Tima is treated as an object time and time again (with the exception of Kenichi, of course) without much substance.

Even Duke Red disregards the feelings of the girl resembling the daughter he lost, putting her on a pedestal (Tima is literally told to sit on a throne) so as to fit his own design for the world. He performs civility, kindness, perhaps out of some ounce of love for whom Tima represents, but aside from that, the man doesn’t exactly go out of his way to make her feel welcome.

Rock, on the other hand, doesn’t bother hiding his disdain towards Duke Red’s heir, his “real child.”

In fact, Rock loathes Tima to the point of choosing to kill his father and himself via an explosion rather than have them die to the unstable robot’s minions during the climax. While the boy reads as somewhat sympathetic due to his neglect and verbal abuse by Duke Red, Rock is still guilty of inflicting violence on unassuming Tima more than once.

Kenichi and Shunsuke both treat our deuteragonist with respect, but Kenichi is the one character who goes beyond the call to get to know her. In this respect, Tima, being the one and only female character who feels like she truly exists in the world, can be read as a reinterpretation of the biblical Eve.

In other words, Tima is pushed to act the part of child, mother, and harbinger of doom all at once.

As compassionate as Kenichi is, his treatment of Tima, while justified, is infantilizing. To Duke Red, she stands above and beyond humanity; she is a vessel created for the sake of furthering his plans under the guise of improving society. To Rock, she is an obstacle, something to be disposed of for fear of losing his father’s affection.

So, what does this all mean in the context of girlhood?

For this girl-robot to be written so blank, so impressionable, a character with no direction of her own making, says so much about what a girl can expect in Metropolis. For Tima’s single moment of strength to be a moment fueled by pain doesn’t inspire much hope for girls’ futures in the long run either.

Now, I’m not saying Tima is poorly written. Tima’s wide-eyed innocence makes perfect sense for her role in the story. We’re meant to unpack her story for ourselves.

The thing is, this writer just can’t let untapped potential go. With that said, Tima getting a second chance at life during the end credits was wonderful to see, but again, this twist of fate doesn’t change nor fix the way she was treated for the majority of the movie.

What can be said is, may her second chance be a more fulfilling one.