Michiko to Hatchin: A Blast From the Past 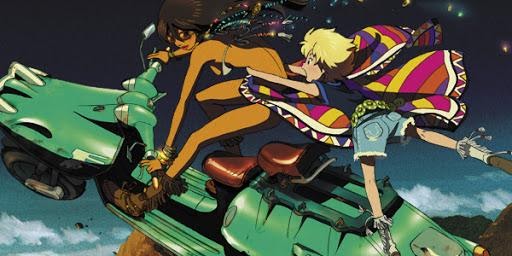 The early 2000s was a time where girl power reigned supreme. Michiko to Hatchin, also known as Finding Paradiso, is one of those stories that screams girl power, but it also tells a story that wasn’t seen much in anime during the 2000s. The show changes up the playing field in terms of storytelling, and it leaves a huge impression on audiences.

Michiko to Hatchin follows the story of Michiko Malandro and Hana Morenos. Hana is a young girl who lives with an extremely abusive foster family until Michiko escapes prison and steals her from the household. Oddly enough, the two have the same mysterious tattoo on their bodies, which leads Hana to trust Michiko to some extent. The two embark on a journey to locate Hiroshi Morenos, the one man that brings them together, but in the end, they realize that what they needed was each other.

What Makes This Show Stand Out?

There’s a lot that makes this show stand out. It’s fun, but realistic, and not afraid to venture down into the darker side of humanity. The soundtrack also matches the energy of the show, and it gives listeners a taste of Brazilian music. However, the glue that holds the show all together is the bond the two main characters develop throughout the series.

The show’s set in the fictional country of Diamandra, but the country is most likely influenced by the South American country Brazil due to its resemblance of the actual slums in Brazil, and its abundance of Afro-Latin citizens.

The music in the series also reflects the country with the soundtrack’s heavy samba influence, which gives viewers more clues about the setting. The music’s upbeat sound pairs well with the show’s energy, and it also goes along with the barrage of bullets that the show’s characters find themselves either starting or avoiding. 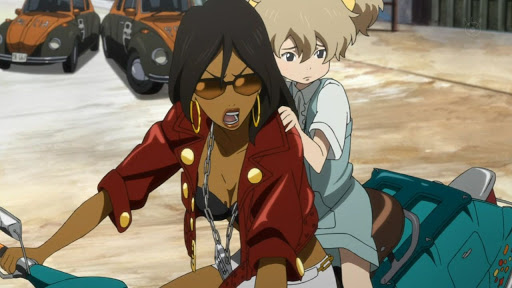 The Characters and Their Bond

An element that makes this show stand out is the odd relationship between the two protagonists, due to their ages and personalities. It starts off as a clash between yin and yang, and as the show progresses, the characters find a loving home within each other. Seeing the chemistry between the two leads brought the show some positivity despite its grim undertones.

Michiko is an ex-convict who escaped a supposedly inescapable prison at the start of the series. She’s a bit of a diva, but she’s also a certified badass who can stare down the barrel of a gun without breaking a sweat. She’s loud, confident, and shameless, but at the end of the day she’s always there for the people she loves.

Hana is a young girl, and the biological daughter of Hiroshi Morenos, the love of Michiko’s life. Due to being abused by her foster family, Hana is more detached from her emotions, and she’s more logical and serious than most children her age. Like Michiko, Hana is always there for the people she loves, but in a less rambunctious way.

Drenched in a Grim Reality

The show is not afraid to tell the stories of the people who live in harsh conditions. The show begins with documenting the abuse that Hana was exposed to at the hands of her foster family.

Her foster family only adopted her for the child support money, and in one episode, her foster father, a priest, tries to kill her to collect the payoff from her life insurance. In other episodes, she’s beaten, humiliated, and threatened with an iron by her foster siblings. Thanks to Michiko, Hana is rescued from that environment, but others in the series aren’t so lucky.

Pepe Lima, an exotic dancer, is trying to save up enough money to run away from the slums with her younger sister, Lulu. Prior to the series, the Lima sisters were wealthy, but after the death of their father, they ended up in the slums. In order to survive, Pepe does what she can to save up enough money to leave the area with Lulu in pursuit of a better life, but due to the intervention of Pepe’s abusive boss, their dreams are crushed.

The show also talks about human trafficking. In a few episodes, the topic comes up, but it’s treated as a common occurrence. With gangs running rampant on the streets, certain locales have gotten certain protections because they give these gangs children to traffic, Hatchin becomes one of these children at some point in the show.

There’s also a rumored traveling trafficking ring in the show that works in the background, but it’s not confirmed to be true due to the characters’ distance from the actions of the ring.

Throughout the series, characters come and go, willingly or forcibly, much like in life. The stakes are higher on the road, but the people are desperate to live out their lives that they’d risk everything for a taste of happiness. Watching Hana and Michiko experience loss and cope with it allows for the audience to grow with the characters as well. 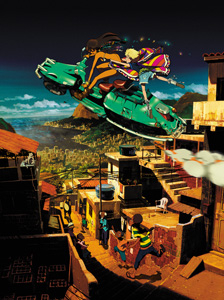 A common theme within the show is girl power. The show does start out with the two girls coming together due to one man, but by the end of the series the two women realize that they only needed each other. Throughout the series, Michiko and Hana grow to trust and love each other as they develop the familial bonds they never had.

The show not only focuses on the titular duo, but it also shows other women in the spotlight doing what they need to do to survive in the situations they were put in.

While some of the women do horrendous things, like give children to trafficking rings, in order to stay alive, others didn’t stay in their toxic environment and left to pursue a decent, honest living. The clashing between these worlds also fuels a lot of the relationship development of the characters introduced throughout the series, and also influences the relationships between them showing the complexities of the human experience.

The series is a definite must watch no matter what you’re into. The soundtrack is amazing; the characters are so raw and it’s very easy to believe they’re actual people. The story itself is very dark, but the characters never stop fighting for their happiness even if it ends up killing them.

Abuse is rampant in the series, so if that’s not something you want to see, go ahead and skip those scenes. If you’d rather not see any of that, go ahead and read the episode summaries. You might not get to see the relationship develop, but at least you know what has fans of the show raving. Michiko to Hatchin is available on Funimation.