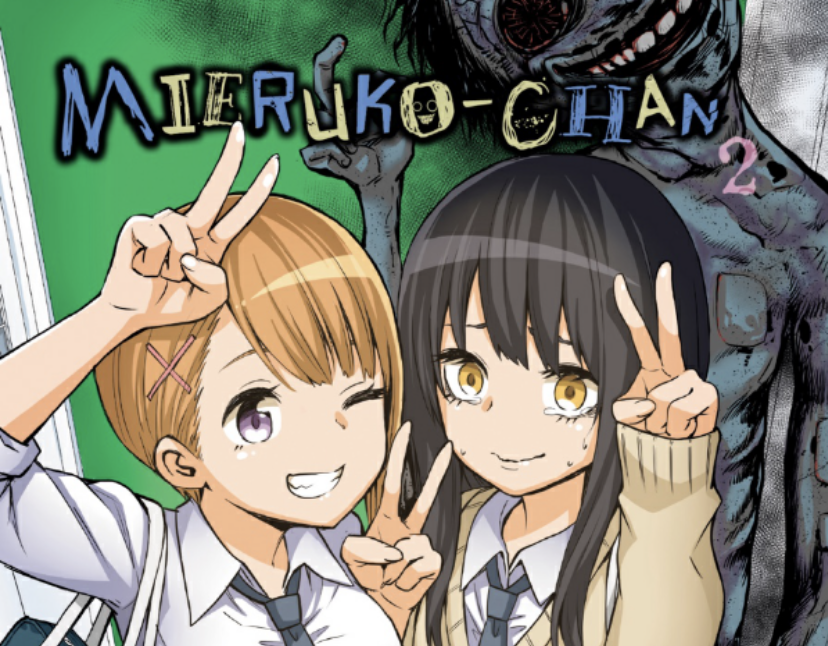 When high schooler Miko is suddenly able to see spirits that no one else can, she does what any rational person would: she pretends she can’t. No matter how terrifying or gruesome the spectre is, poor Miko does her best to maintain a brave face. But how did Miko acquire this strange power, and more to the point, what happens when these spirits realize she can see them? Mieruko-chan is an ongoing manga series by Tomoki Izumi. The series first started serialization in 2018 and has garnered quite a lot of attention for its schadenfreude-esque gags and eye-catching art. With an anime adaptation announced for release sometime this year, let’s check out what makes this series so good that you can’t look away.

I’ll say straight off the bat that Mieruko-chan is a series I adore, but it does have a bit of trouble finding its feet. The first few chapters have a rather formulaic aspect to it: Miko sees a ghost, it freaks her out, and then we get a final shot of her tear-stained face as she tries to pass it off. Besides one distasteful gag with a ghost that gropes Miko’s best friend and teacher’s breasts, it’s a decent set up to the series, but it was in danger of growing old.

Thankfully, from the end of volume one onwards, Izumi begins to weave some elements of mystery to Miko‘s abilities and what she’s actually seeing. As we’re introduced to other psychics and more nightmarish creatures, Mieruko-chan builds up a sense of unease by only hinting at a larger mystery.

Miko’s powers are never quite defined in terms of how she got them or their abilities and the creatures we see range from protective spirits to nightmarish curses. We don’t ever really know what could happen if the specters realize Miko can see them, but we can imagine it’ll be bad news for the girl.

The gags are set up so that Miko always escapes, and we get a few chuckles from it. But the underlying threat of what could happen if she doesn’t, is enough to keep us turning the pages to see how she’ll escape the next spooky encounter. 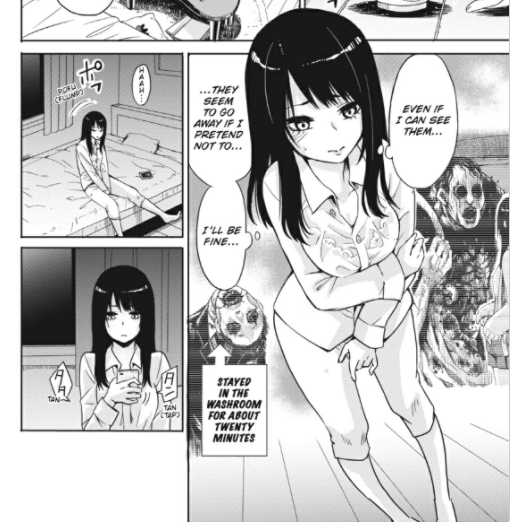 But it isn’t all doom and gloom for Miko. The series also features some truly touching chapters, made all the more impactful when interspersed between the aforementioned horrifying ones. For example, in volume one Miko is able to see a man’s deceased cats who stay by his side (that one got me teary-eyed!). On top of this, there are some really fantastic moments between Miko and her best, yet often oblivious, friend Haru.

Most importantly, it’s a chance to see Miko as a character outside of the ‘tragic, teary-eyed girl’ earlier chapters set her up to be. For example, we see how brave and quick-thinking she is when she protects Haru. Haru herself becomes quite a fun and enchanting character to see, bringing some lightheartedness to a story that is bordering on gloomy. These heartfelt moments, as well as the larger looming mystery, help elevate Mieruko-chan from a one-joke series to something a bit more special.

A final key part of the series’ success is how memorable the spirit designs are. Juxtaposed against the adorable designs of Miko and her friends/family, the creature’s horrifying details are unmissable. There are some recurring design features such as multiple arms / hands and chains, but each creature is uniquely designed, and straight up terrifying. And, speaking of the upcoming anime adaptation for a moment, it’s an aspect which Passione will need to nail to capture the essence of Mieruko-chan.

Horror and comedy are often thought of as complete opposites to one another, and attempts to mesh the two often end with cheesy results. But Tomoki Izumi has found a way to maintain that perfect balance of creeping readers out while also drawing out a few chuckles. While volume one may feel a bit repetitive to readers, volume two introduces threads of a larger plot which ultimately is what really hooked me into this series.

Don’t look away, this series is a must read!

Mieruko-Chan vol 1 and 2 are licensed in English by Yen Press.