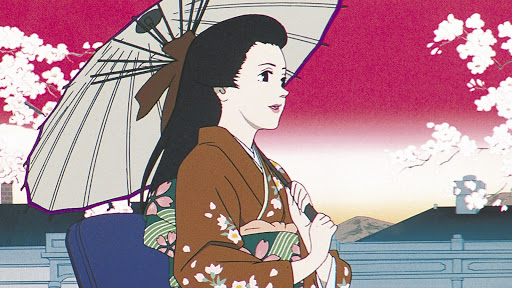 If escapism was an art form, then Satoshi Kon could have taught a masterclass.

In 2001, the film Millennium Actress hit theaters. Kon’s signature art style and interest in the human mind delighted new and old fans alike, taking us on a journey through the life of a single actress. Previously, Kon’s 1997 thriller Perfect Blue had also told the story of a celebrity dealing with the blurred lines between fantasy and reality. This was a storytelling niche that Kon filled effortlessly.

Millennium Actress doesn’t appeal to audiences as a typical anime film would. It isn’t filled with fast-paced action or heart-pounding thrills. What Kon brings to the table is something much more subtle, something feeling more like a live-action Japanese film despite being painfully hand-inked. It brings us into Kon’s overflowing imagination but allows us to keep at least one toe in the real world.

If you have never seen the film, now’s the time to experience one of the greatest films in the anime catalog. If you saw it years ago, you may find that Millennium Actress has only become more magnificent over time. Find out where to watch online at the bottom of the page.

What Happens When Reality and Fiction Become Too Entwined

Millennium Actress follows Chiyoko Fujiwara, once the top star of the prestigious Ginei Studios. Strangely, at the height of her career, she left showbiz and disappeared from the public eye.

When the studio finally goes bankrupt, Genya Tachibana, a documentary filmmaker, seeks Chiyoko out with the hope of telling her story on the big screen. Along with his cameraman Kyoji Ida, they bring Chiyoko a strange key from her old studio. When she sees it, it pulls up waves of memories, each becoming more interwoven with her many roles as a starlet in classic Japan.

As a young woman, Chiyoko was given the mysterious key by an artist who spoke out vehemently against the Sino-Japanese war. This raged between China and Japan from the late ’30s until 1945 and led to millions of Japanese lives lost.

Chiyoko helped the unnamed artist to escape from the police. When she wonders how she’ll ever see the man again, she decides to become an actress, hoping that he would see her and recognize her. Over the decades, she becomes more and more famous, starring in historical dramas, monster movies, and more. But she never once forgets her quest. 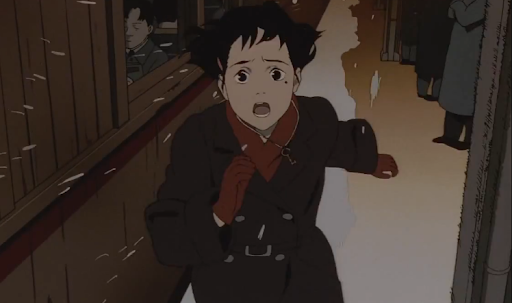 When the key is lost, Chiyoko is heartbroken. Marrying a director from Ginei Studios, she gives up hope of ever seeing her treasure again–though it does surface years later.

I’m not one to spoil the ending of the film for those who haven’t seen it. I’d rather you cry on your own because I do every time. I will say this: it is about the journey, not the destination. Chiyoko’s life, even without the man she sought, was made richer by the leaps she took to find him.

The film itself is actually inspired by real-life actress Setsuko Hara, who remains one of Japan’s most beloved film stars to this day. Over 30 years, she starred in over 100 films. In 1963, she suddenly left the industry at the top of her career, claiming that she never liked acting in the first place and only did so to provide for her family. Ouch.

The creator of Millennium Actress, Satoshi Kon needs no introduction. His name remains synonymous with creative quality even a decade after his sudden death from aggressive pancreatic cancer.

Aspiring to become an animator from a young age, Kon was inspired by many anime series in his youth, from Space Battleship Yamato to Heidi, Girl of the Alps. In 1982, he graduated with a degree in graphic design from Musashino Art University in Tokyo, one of the top art schools in the country.

When first breaking into the anime industry, Kon provided art for Patlabor 2: The Movie. He also wrote the script for the fifth episode of the JoJo’s Bizarre Adventure OVA in 1993.

As far as anime series go, Paranoia Agent was many people’s introduction to Kon’s art style and signature strangeness. Airing in the U. S. on Adult Swim in 2005, it told the story of a mysterious young criminal armed with a bent baseball bat assaulting people in Tokyo. Some fans of the series have praised it as a simple psychological thriller, while others have stated that it is a fantastic depiction of a depressed mind.

Kon went on to create plenty of other legendary anime films, including Perfect Blue, Tokyo Godfathers, and Paprika. All of them have been largely praised and accepted by mainstream critics, with Metacritic even naming Paprika in the top 25 sci-fi films of all time.

By utilizing the power and freedom of the anime medium, Kon has been able to convey certain aspects of the human condition is perhaps a more understandable way than if he went with a live-action approach. There’s a reason why his work is still so celebrated, and why it will likely never go out of style. 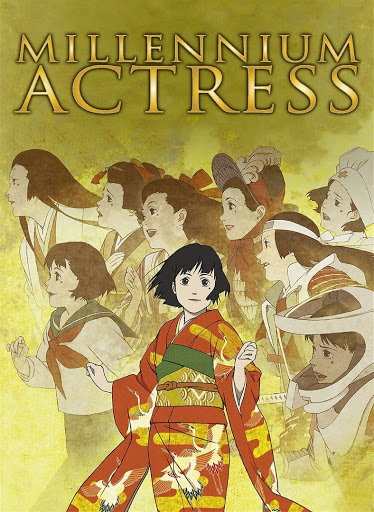 The Film was Created by True Visionaries

Millennium Actress was produced by famed anime studio Madhouse, who also produced Paranoia Agent. Madhouse also worked with Kon on all four of his feature films and was working on his fifth film Dreaming Machine which was sadly left unfinished after his passing.

Over his career, Kon worked with Susumu Hirasawa on his musical scores. Millennium Actress was the first collaboration for the two, though Hirasawa would go on to create music for Paranoia Agent and Paprika as well.

Hirasawa is also responsible for the original Berserk soundtrack, as well as the more recent remakes.

Having been in the music industry for nearly 50 years (yes, five decades), Hirasawa has worked in just about every genre, from heavy metal and punk rock to ambient beats and experimental sounds. He plays just about every instrument, it seems, including the electric guitar and laser harp. No, I had never heard of the latter either, but it is as cool as it sounds.

In late 2019, Millennium Actress made a trip to the big screen here in the United States. Curiously, while you’d think a Blu-ray release would have happened years and years ago, Millennium Actress was only made available on the medium in December of 2019. Five months ago. That’s extremely strange, but the time is now to get a physical copy of this masterpiece if streaming isn’t your thing.

And yes, the film is finally streaming. 2020 isn’t a complete bust.

The original Japanese language version was the first to make an appearance in theaters in 2019. One week later, however, a brand new English dub version was shown, after Dreamworks and Go Fish Pictures lost the rights. Now distributed by Eleven Arts, the English dub cast includes Erin Yvette (Firewatch, Tales from the Borderlands), Cindy Robinson (Sailor Moon, Bleach), and Benjamin Diskin (Aggretsuko, Avatar: The Last Airbender).

If the Japanese version is more your style, you will likely recognize the majority of the voice talent. Mami Koyama, the voice of adult Chiyoko, also voiced Kei in Akira, another of the best anime films of all time.

One of my personal favorites when it comes to voice acting is Fumiko Orikasa, the voice of young Chiyoko. In the past, she’s provided the voice of Rukia in Bleach, Seras in Hellsing, and Riza Hawkeye in Fullmetal Alchemist: Brotherhood.

It’s truly a blessing that the movie has been picked up by a new distribution company. The original reception to the movie likely hasn’t changed, and Millennium Actress is currently sitting fancy with a 93 percent critics score on Rotten Tomatoes. Audiences give it a 90 percent overall, which is a massive success.

The overall consensus seems to be that although the film is animated, it has enough soul to feel as though you’re watching a live-action drama. This emotional richness can often be found in Satoshi Kon’s work.

Upon the original release, Millennium Actress was almost nominated for a 2003 Academy Award, and it’s interesting to consider what would have happened had it been. 2002 saw Spirited Away take home the big prize, the first anime film to do so. Could it have happened again?

Millennium Actress did take home the gold for Best Animated Film at the 2001 Fantasia Film Festival. It also won big at the Japan Agency of Cultural Affairs Media Arts Festival, the Animation Kobe event, the 2002 Mainichi Film Awards, and the 2001 Festival de Cine de Sitges in Spain. It was nominated for multiple Annie Awards, including those for direction and writing.

Millennium Actress: Where to Watch Online Streaming or Where to Buy on Blu-ray