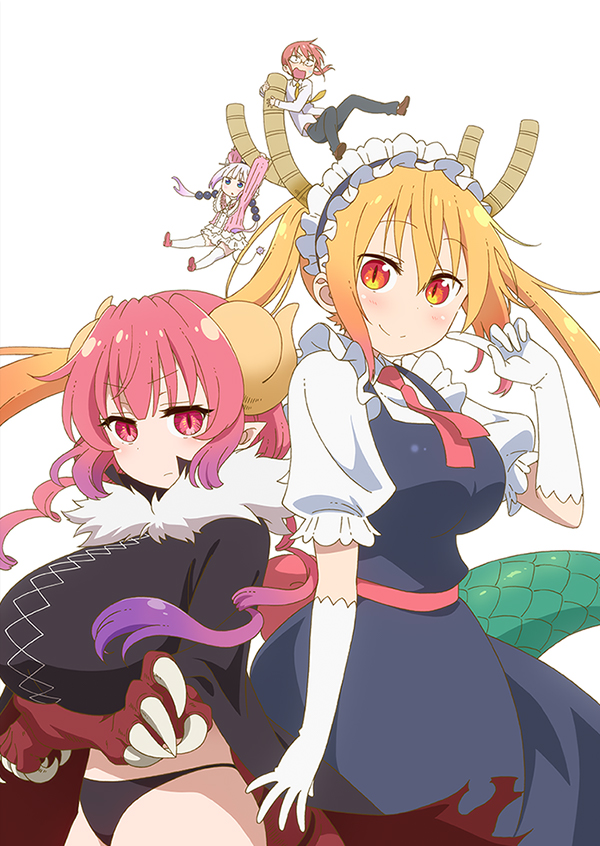 After waiting two years for a set-in-stone release date, the official Twitter for Miss Kobayashi’s Dragon Maid announced that it will have its second season start airing in July. The news came with an awesome visual featuring a gigantic Tohru and, for the first time, the new character Ilulu in all of her anime’d glory (only the back of her head was shown in the previous visual). Hilariously enough, miniature versions of Kanna and Kobayashi are shown grabbing onto Tohru’s right horn for dear life, slyly highlighting the hijinks Tohru puts them through on a day-to-day basis.

The second season, now known as Miss Kobayashi’s Dragon Maid S, was announced back in February 2019. Expectations were above and beyond high that the second season would get a proper release on the ASAP, but those hopes were trampled after the unfortunate and tragic arson attack on Kyoto Animation that happened almost half a year later. Then, after starting over from scratch, COVID came in like an uninvited houseguest and delayed production again. But like a phoenix rising from the ashes, it was announced in August 2020 that Kyoto Animation was going to continue producing their beloved dragon slice of life’s second season.

May I gush just a bit? Okay, I will. I really, really cannot emphasize enough how excited I am that we are getting to see the second season of Miss Kobayashi’s Dragon Maid this July. The first season of the show is a high mark for Kyoto Animation, and probably the cutest and funniest show they put out in the 2010s alongside Nichijou. To see KyoAni bounce back after terrorism and COVID kept the studio’s head underwater for the longest time ever reads like the classic story of turning tragedy into triumph. I have nothing but high hopes that KyoAni will once again work its magic and deliver the fun and cozy vibes Miss Kobayashi’s first season brought us, plus more.

You can watch the first season of Miss Kobayashi’s Dragon Maid on Crunchyroll, VRV, and Funimation!