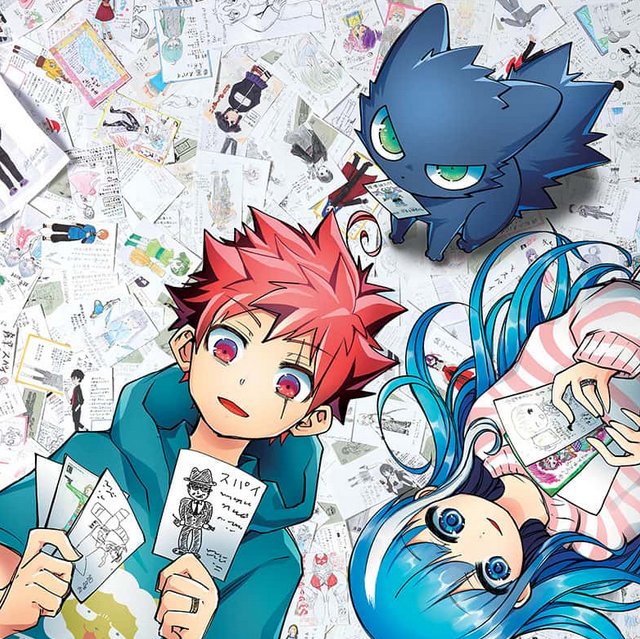 The official Twitter account for Hitsuji Gondaira’s Mission: Yozakura Family recently revealed the arduous process behind creating chapter 54’s color page, featuring the submissions sent in for the series’ first anniversary competition. While the chapter itself was already discussed in the latest edition of Jump Time, what is worth highlighting here is the color page: its creation, its significance, and the kind of content we can expect from the Twitter account going forward.

First of all, it is quite impressive to see that the Shueisha staffers (or photographers hired by them) went to the trouble of laying all of the submissions out, as it must have taken a fair amount of time. When reading chapter 54, it didn’t even cross my mind that the color page might feature n a real photo (the imposition of Taiyo and Mitsumi sort of disguises that fact) but, now that I know, it makes it even cooler. Kudos to them.

Secondly, the tweet from the official Mission: Yozakura Family Twitter account reveals that the submissions received for chapter 54’s color page total a whopping 546, including some from overseas and even one from fans as young as five. Although all five hundred entries are obviously not featured here (that would probably fill up an entire room), it is great to see that the series is so popular – many critics, including myself, have been scratching our heads wondering why the series is still ongoing. Clearly, there is an audience out there for it.

Furthermore, if the making-of for chapter 54’s color page is anything to go by, we can expect more behind the scenes content from the official Mission: Yozakura Family Twitter account going forward. This is good news, as what Hitsuji Gondaira’s spy series desperately needs right now is exposure – it may be selling well, but it has been left by the wayside somewhat by Weekly Shonen Jump’s BOOST campaign.