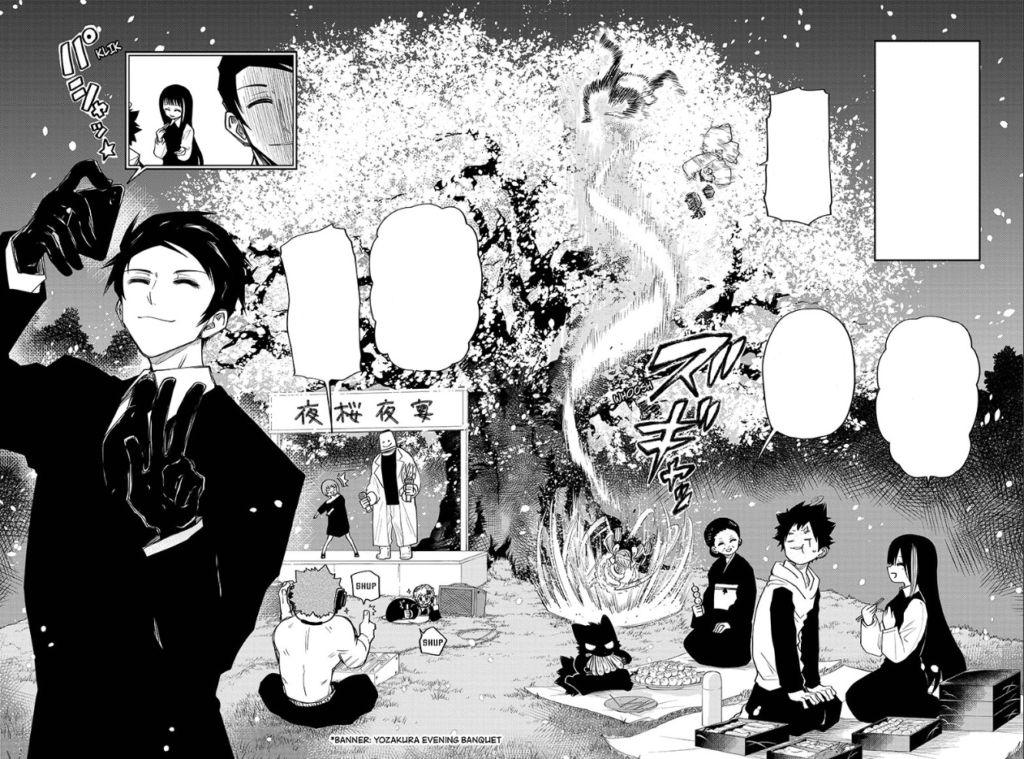 The beginning of a new week can only mean one thing: time for new Weekly Shonen Jump! This is where Jacob investigates the latest and greatest in the magazine, telling you what’s worth your time and what’s not. You can find coverage of other series under the tag Jump Time. Here’s Mission: Yozakura Family chapter 66.

Mission: Yozakura Family sure is taking its sweet time getting to its next big arc. Although the ‘Yozakura Front Lines’ operation was announced all the way back in chapter 62, it’s taken until now to kick it off. Even then, this isn’t a proper start: most of Mission: Yozakura Family chapter 66 is dedicated to the family’s final preparations for the operation, before leaving off on an ominous final double-page splash. Much like previous chapters, it treads the dangerous line between plot progression and episodic stalling.

More specifically, Mission: Yozakura Family chapter 66 centers around the ‘Yozakura Evening Banquet’: a cherry blossom-viewing party conducted at night under the special ‘Heavenly Cherry Blossom Tenno’ tree. This is tied into the series’ newly-developed power system by having Mutsumi explain that it has a ‘small amount of someinine’ inside it, working in harmony with the family’s special blood to ‘heal the mind and body.’

This is tied into the overall direction of the story by saying that the banquet is a traditional part of the family’s final preparations for a big mission, but the biggest load of plot development comes when Kyoichiro, Mutsumi’s overprotective older brother and Taiyo’s reluctant brother-in-law, literally steals him away from the party and explains that one of their ‘secret objectives’ is to steal their mother’s corpse back from the evil organization Tanpopo.

As Kyoichiro reckons, it’s unfathomable that the organization’s research on someinine could have progressed without ‘prime research tools,’ and their mother’s body was never found, so it’s highly likely that they somehow have it. This fourth, secret objective comes along with three others, by the way, which are laid out in Mission: Yozakura Family chapter 66 so that the reader is on exactly the same page as the characters.

Even after all this exposition, though, Mission: Yozakura Family chapter 66 still finds a way to place it in the context of our characters’ relationships, capping off with an adorable moment between Mutsumi and Taiyo. As has already been said multiple times, this series has really found its feet as of late, and its newfound mastery of the balance between episodic storytelling and plot progression has me confident that its upcoming arc will shape up to be an excellent one.

With any luck, it’ll start next week.

You can read Mission: Yozakura Family chapter 66 for free via VIZ Media.