My journey with Mitama Security: Spirit Busters has been a strange one. I have watched Tsurun Hatomune’s comedy series move from the depths of the Weekly Shonen Jump table of contents to this week ranking above Tatsuya Matsuki and Shiro Usazaki’s act-age, a series that has just surpassed 2 million copies sold. It has also gone from one of my least favorite series in the entire magazine to now perhaps one of my favorites. Why?

This is because what draws myself, and many others, to Japanese comics (manga) above all other forms of media is how the nature of their serialized publication can facilitate profound transformation over the course of their run. And while some may point to such long-running shonen epics as One Piece and NARUTO as obvious examples of this, I’d argue that Mitama Security stands as just as much of a testament to the process of serialization as any other. Here’s why.

Back to the Beginning

If we were to start back at the very beginning, winding back the clock to the beginning of September when Mitama Security chapter 1 first released, what we would find is a series opener marked by a severe lack of focus and a serious comedic deficiency.

Part of this is due to the sheer amount of groundwork that Hatomune is forced to lay in this initial chapter. Introducing us to the concept of spirits, exorcism and the protagonist Rena Haze’s unique ‘spirit line’ predicament simply takes up a lot of time and ends up bombarding the reader with an absolute boatload of information – not exactly a good first impression. 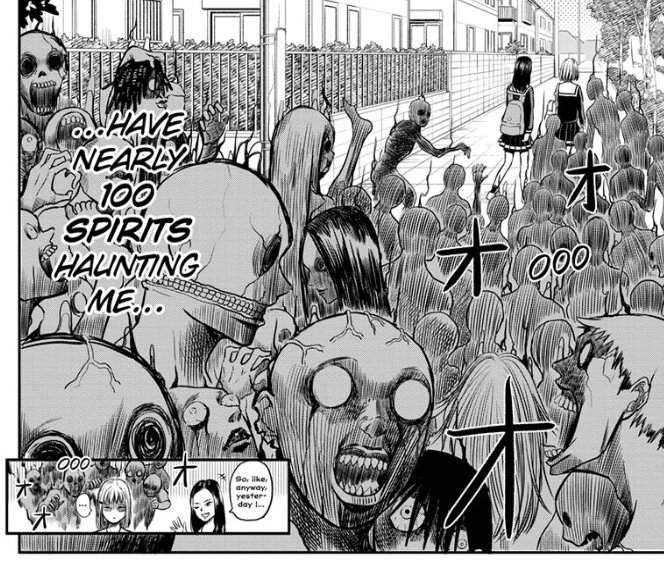 The fact that all of these concepts are key to the series as a whole might lead some to forgive some of Mitama Security’s early misses. But the fact remains that Hatomune didn’t have to introduce all of them at once; he could’ve easily taken a more drip-feed approach, easing the reader into his unique comedic world.

Given this possibility, I’m reticent to forgive. Doubly so when comedy could’ve been a useful vehicle to paper over the gaps in this sense – but here, again, Hatomune misses the mark. The problem is that the gags of this first chapter are so over-the-top, so gratuitously goofy that I didn’t crack so much as a smirk while reading this chapter for the first time back in September, nor did I do so when revisiting it earlier on for this review.

In fact, it was only by revisiting this chapter now, almost half a year later, that I picked up on even more flaws: such as the fact that the final gag of this chapter – Mitama shooting the spirit – takes so long to play out in a bizarrely paced final confrontation. 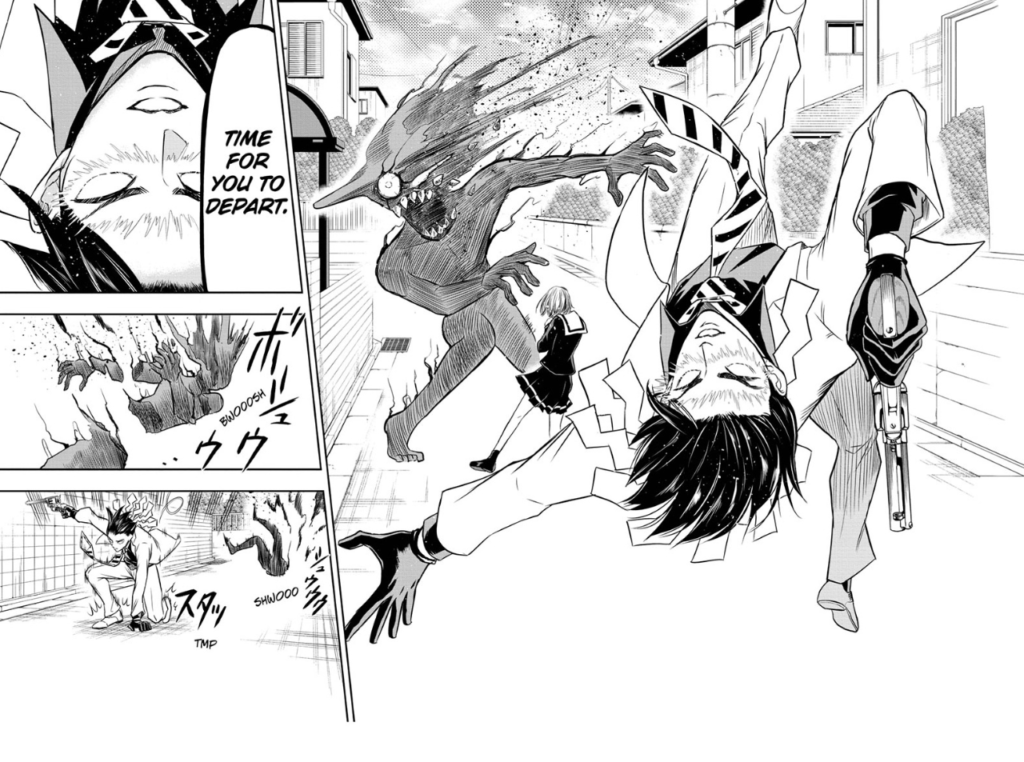 Nor does Mitama Security save much face heading into its second and third chapters. In fact, Hatomune ends up repeating many of the same mistakes, along with a few new ones. Mitama’s ‘battle mode,’ which is activated when he cries, seems like a great example of this as it never lands in quite the way that it is clearly intended. It instead comes off as very over-the-top and almost like a deus ex machina as a result of utilization to resolve conflicts.

Mitama’s battle mode forms, in turn, but one reason why Hatomune’s whole approach in these early chapters feels so off. All three of these initial chapters feature some kind of ‘battle’ between Mitama and a spirit – whether it be the gun dual in chapter 1, the basketball match in chapter 2, or the culinary showdown in chapter 3. 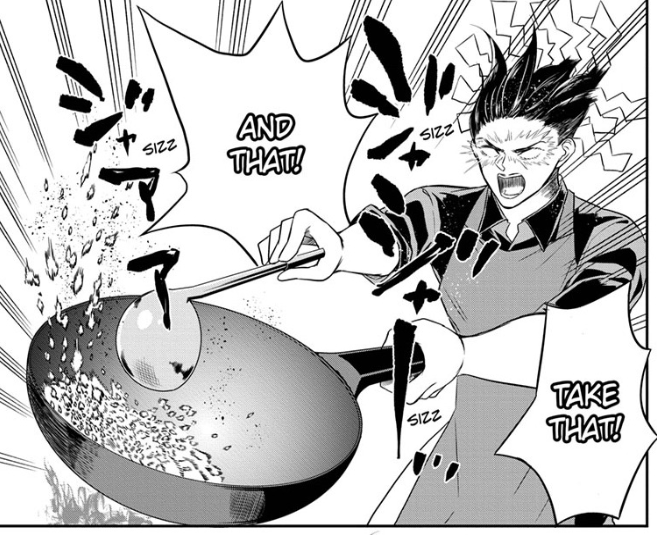 Yet, despite a supposed focus on battles, Hatomune fails to define the rules of these conflicts nor our protagonist’s victory conditions, meaning that these clashes often suffer from a lack of focus and clear internal logic. As a result, Hatomune has no choice but to lean on increasingly over-the-top gags and comedic moments – none of which manage to find a graceful landing.

Luckily, Mitama Security’s worst parts are contained within those three opening chapters. And even then, chapter three is a marked improvement over the first two as it moves away from out-and-out battles and towards more of an esoteric conflict in the kitchen.

But chapter 4 is where things start to really change for the better. Introducing the new character Soya, the series begins a reorientation that would spell brighter frontiers from here on out. This is because instead of focusing on over-the-top gags stemming from a clash between Mitama and a spirit, the chapter roots its comedy in the relationship between Mitama and Soya – giving the series a much-needed emotional edge. 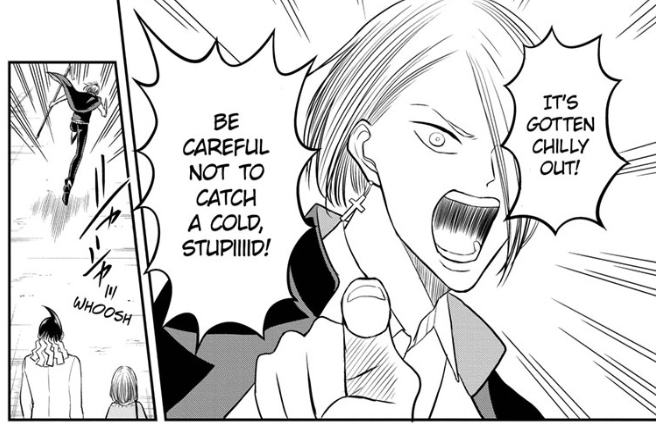 Indeed, this chapter marks a wholesale departure from the series’ previous focus on battles and instead reorientated Mitama Security to focus on the relationship between characters, from which comedic situations often stem. Battles still occur, of course, but not as often and not in the same single-minded way. Thankfully, this also means that we see less and less of Mitama’s ‘battle mode,’ which never appealed very much in the first place.

This reorientation would not be limited to simply human characters, either. Starting from Mitama Security chapter 5, where the recurring character of Yuko is first introduced, some of the many spirits in Rena Haze’s ‘spirit line’ would be given personalities and names in spite of their homogenous appearances – such as the explanatory Mr. Commentary, and the childish Ta and Pi. 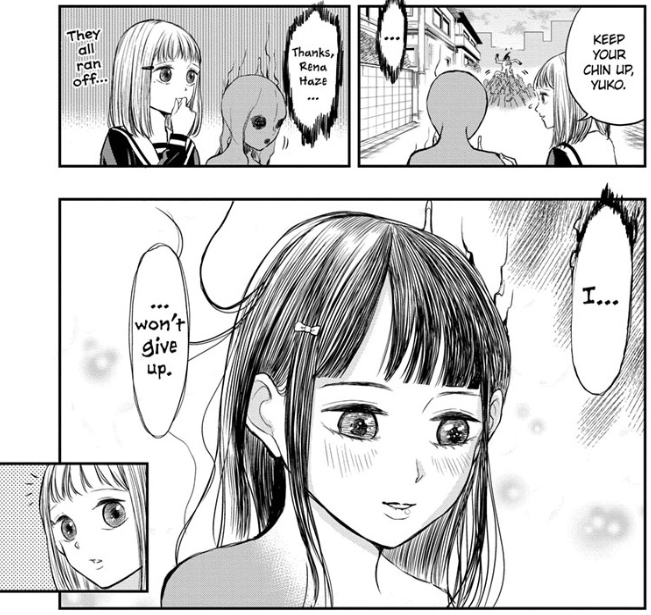 But Rena and Mitama remain undoubtedly the focus of the story, especially as Hatomune begins to enumerate on their respective personalities and backstories. Chapter 14 offers us an excellent day in the life of Rena, and Mitama’s comedic backstory would be the focus of both chapters 11 and 12. There’s even a little romance between the two – a little weird considering the age gap between them, but what the hell.

The net result of all of this is not just enamoring the reader with the characters – a feat that Hatomune manages to achieve, at least in my case – but also grounding the comedy in something more concrete than Hatomune’s whimsy.

That is not to say, however, that Hatomune completely abandons his early battle-focused approach. Rather, he returns to it in Mitama Security chapter 6, not too long after his shift towards more character-based storytelling, telling a story about Mitama’s quest for tapioca that resolves many of the problems of his previous approach. 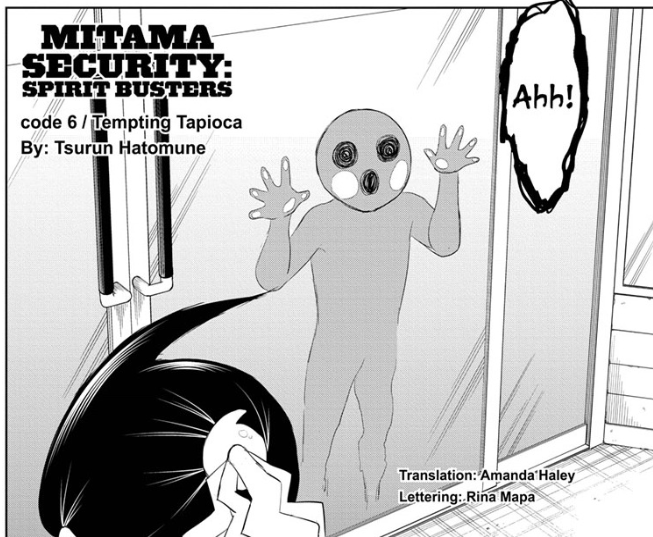 What makes this chapter so much more effective than so many of the earlier chapters is how Hatomune chooses to contain the conflict between Mitama and his opponents into a single space (the shop), which provides a clear structure to the whole clash that previous incidents lacked – get to the counter and order the tapioca, and you win.

This chapter stands in marked contrast to chapter 2, which I explored in the last section, as it clearly defines the rules and victory conditions for this conflict. And while this marks the last time Hatomune utilized a more battle-focused approach as of the time of writing, so marked is the improvement that I honestly wouldn’t mind seeing some more.

Masters of the Medium

All of that is not to say that Mitama Security and Tsurun Hatomune’s work on it is perfect. Far from it. Some chapters clearly stand above others in terms of effectiveness, most notably any chapter involving the ace detective Kojima Edoichi, whose gags never seem to quite land for me. 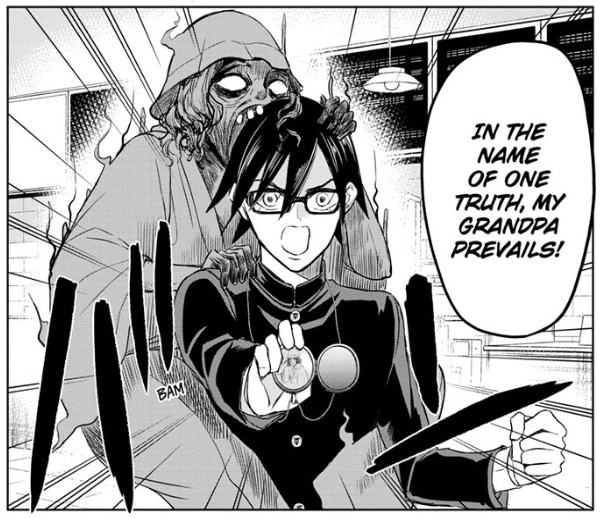 Nevertheless, there has clearly been a marked transformation in the way that Hatomune approaches the narrative and structure of his gag series ever since it debuted in September – a transformation that has clearly paid off, as the series has been rising in both the Weekly Shonen Jump table of contents and fans’ estimations in recent weeks.

This kind of transformation is, in turn, only something that could have been possible in the arena of serialization, and most especially on a weekly basis in a magazine such as Weekly Shonen Jump. It is only by approaching and reapproaching the story and characters of Mitama Security on such a regular basis that Hatomune, with the help of the reader surveys, has been able to reevaluate the way he tells his stories and presents his characters with fantastic results.

Western comics simply don’t offer this same possibility. The level of creative control over, say, a Marvel comic – how about The House of X, which has been garnering so much attention as of late – is lessened given that writing, drawing and coloring duties are divided up between different people and the fact that creatives are usually only brought on board to tell a specific story, which is hard to deviate from.

Of course, more independent western comics do provide more creative possibilities in this sense. I’m thinking here of something like Jeff Smith’s Bone, which was both written and illustrated by Smith and underwent an extensive transformation from a light-hearted comedy to high fantasy over the course of its 13-year run. But such examples are few and far between – the infrastructure to facilitate such transformations along the lines of Japanese comics simply doesn’t exist in the West.

That being said, I am aware that my growing like for Mitama Security might stem from the simple act of spending more time with it and its characters over the course of these past couple of months. Certainly, the act of reading has me more invested in the story than before, but I’m confident in saying that this wouldn’t have been possible without the clear and evident changes in Hatomune’s approach. Truly, Mitama Security is a testament to the process of serialization and, indeed, the world of Japanese comics as a whole.