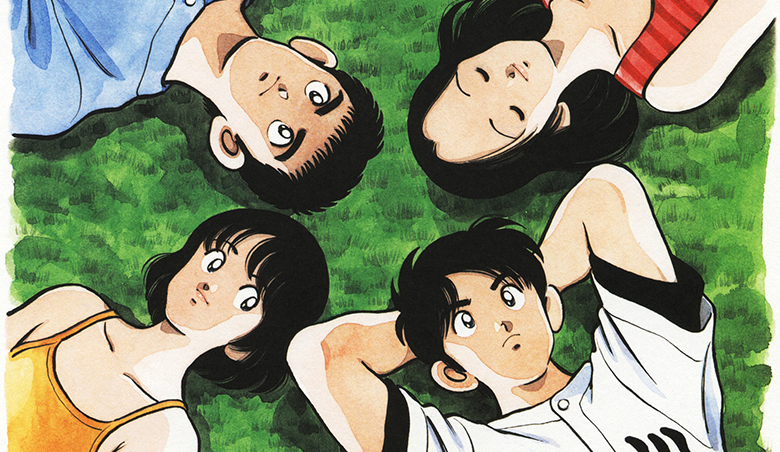 Historically, sports anime and manga haven’t been nearly as successful in the west as they have in Japan. It wasn’t until the 2010s era of sports shows which were created with more of a female audience in mind like Yowamushi Pedal and Kuroko’s Basketball that the English speaking anime fans of the world started to ease up on the sports anime sub-genre.

Western fandom’s failure to take in sports shows until recently is as much a disservice to many great Japanese creators as it is themselves as you Americans, Brits, and Aussies have been missing out. Among all the mangaka and animators unjustly subbed over the year due to needless prejudice against sports cartoons, perhaps the one done the most dirty has been Mitsuru Adachi.

Few mangaka have as many hits in their catalogue at Mitsuru Adachi. Granted having been a mainstay in the widely read Weekly Shonen Sunday alongside Rumiko Takahashi for nearly 40 years now, Adachi has created more than most. Much like his many Baseball playing ace protagonists, he hits more often than he misses.

In Japan he’s widely read and widely celebrated for a multitude of titles like Touch, H2, Cross Game, and many more. The catch here? A good 90% of what he pumps up is sports manga, the majority of which being specifically about baseball. While still a big seller in Japan with his most recent series Mix getting an anime adaptation in 2019, it hasn’t translated to great success outside the tiny island.

While Mitsuru Adachi has penned many excellent manga over the years, like the romantic comedy Miyuki and sweet take on boxing Katsu to name a few we haven’t yet, we can pinpoint the exact one that cemented his place in manga history.

Touch wasn’t Mitsuru Adachi’s first baseball series, that honor goes to Nine, but you could say it was the first in the up to hit the grand slam. It ran in Weekly Shonen Sunday from 1981 through 1986 and has gone on to sell over 100 million volumes, meaning that in Japan Baseball comics sell way better than Super Hero ones do in the states. As successful as the manga was though, that’s only one part of the story.

As it is with the vast majority of successful manga, a Touch anime adaptation was an inevitability. What no one would have guessed was how successful the anime would become in its own right. Running for 101 episodes, the show lasted a full two years between 1985 and 1987. During that time in Japan, it became a weekly event.

During its peak popularity, something around 30+ percent of all television owners were tuning in to catch the program.

Those kinds of numbers are practically unheard of, even for the most popular series. Even today Touch is a name everyone in Japan has some familiarity with and if you talk to any 40+ year old about the series, they’re guaranteed to wax fondly about it.

For a series to have such reach and popularity but be virtually unknown in the English speaking fandom is both odd and unfortunate.

You Know Mitsuru Adachi Art When You See It

People say this about all popular artists, and it isn’t untrue but, Mitsuru Adachi really does have a one of a kind style. His art is easily identifiable, although differentiating one series from another can be pretty challenging even for the man himself as all of his protagonists look, well, exactly the same.

For lack of a better word, his art has a very cartoony style that lends itself to being overly expressive. Adachi can say 1000 words via a single facial expression of one of his characters; You’ll find all the emotional nuance the world has to offer in single close up panels of his. We can’t think of anyone who does more with as little as he does.

Unfortunately, You Can’t Buy Many Mitsuru Adachi Books In English

We’ve talked about how Mitsuru Adachi hasn’t ever caught on in your Americas and in your Englands. At least when it comes to The United States, very very few works have been made legally available; The excellent baseball comic Cross Game and two Short Program short stories collections. You can watch the recent anime adaptation of Mix, a modern sequel to Touch, but that’s about all the Mitsuru Adachi content legally available in English.

It’s a crying shame and we hope Discotek Media or Nozomi Entertainment at least finds fit to make more of the anime available sometime in the future. While the manga’s the real prize, any of that getting published stateside is nigh impossible at this point. We cannot stress enough how good his works have been over the years and because of how influential they are on manga as a whole, and English speaking anime fans have done the man and themselves a disservice by not embracing him.

Why America Has Failed Mitsuru Adachi.

While some sports series have finally broken through to semi-mainstream popularity in western fandom over the past decade like Haikyuu, you have to remember that’s recently a phenomenon. In the 90s and the 2000s, despite their overwhelming popularity in Japan and shows like Slam Dunk becoming popular in other asian countries, sports comics and shows had never ever done well.

A typical Mitsuru Adachi joint doesn’t come prepackaged with the cosplayable boys like a Yowamushi Pedal does, but it has more than enough heart and charm to make up for that. The types of sports shows the western fandom has gravitated towards are ones that pretty easily fit the way the cosplayer and fan-art producing communities get obsessed about a show for sixth months to a year before moving onto the next thing. Stories like Touch and Cross Game feel like home though, and our reluctance as a group en masse to embrace one of Japan’s most incredible story tellers may say more about us than it does him.