As embarrassing as it might be to admit, the characters of shonen manga can often inspire us. Whether it be through training, hard work or a victorious battle, their triumphs can often help us get through the hard times. So why not get them to offer life advice? That’s exactly what Kodansha’s new ‘Mitsuya Magazine’ aims to do, as it celebrates 60 inspirational years of Weekly Shonen Magazine.

Kodansha is running the Mitsuya Magazine campaign in collaboration with the Mitsuya Cider soft drink, who are in turn running several ads for their drink that mimic iconic panels from Kodansha properties – such as the ad below, which takes inspiration from Great Teacher Onizuka.

Such ads are supposed to encourage the youth of today to ‘be themselves,’ presumably by embracing the inspirational power that manga can have on our daily lives. But the campaign is also striving to achieve this goal through more direct methods – by allowing fans to ask their favorite manga characters for inspirational life advice directly.

Navigating to the official website, you’ll find a box in which you can write your worry, to which a Kodansha manga character will reply with some advice. Here’s one I tried earlier: 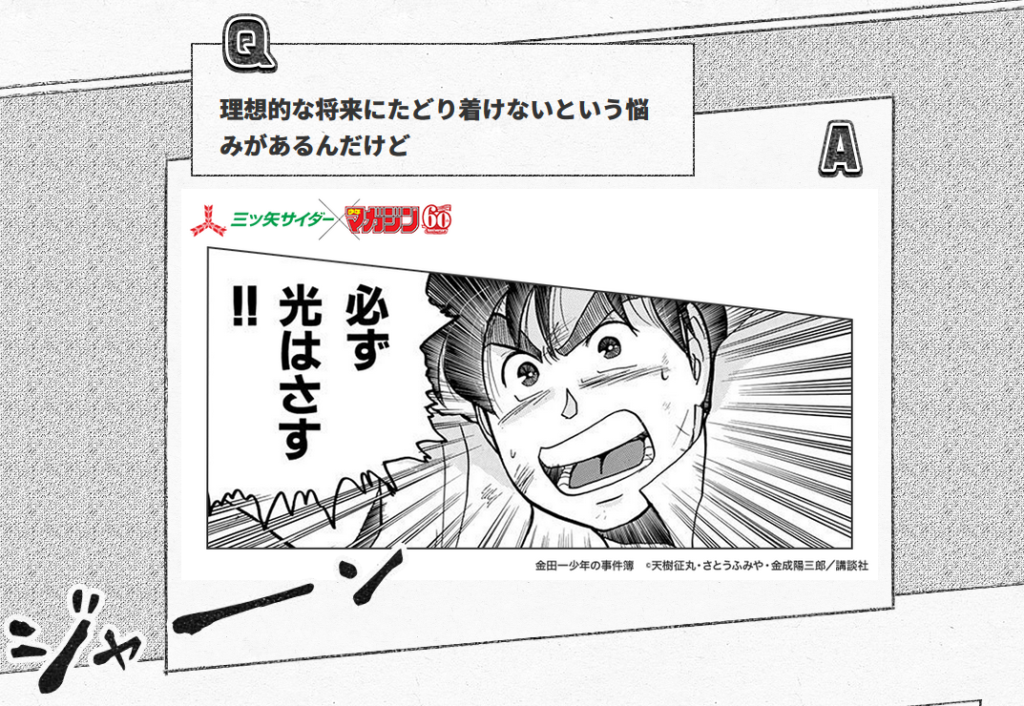 I wrote ‘I’m worried that I won’t be able to reach my ideal future,’ to which Kosuke Kindaichi (the protagonist of Kindaichi Case Files) replied ‘There’s definitely light at the end of the tunnel!’ – or something to that effect.

You can also submit your worries via the Mitsuya Magazine Twitter account, which presumably uses the same bot that the website does. As you can see, it’s actually pretty good at selecting relevant panels by picking up on keywords – although it does look pretty comical when it isn’t able to pick up on any keywords.

The Mitsuya Magazine life advice bot is probably able to reply fairly well to worries because a whopping 500 panels are loaded into the system, ready to help.

These 500 panels form ‘wave one’ of the Mitsuya Magazine campaign and are taken from 10 different series. These include such hits as Hajime no Ippo, Fairy Tail, Baby Steps and The Seven Deadly Sins.

Confusingly, even though the campaign is supposed to celebrate the 60th anniversary of Weekly Shonen Magazine, the characters of Attack on Titan are there as well – even though it’s currently serialized in another Kodansha magazine, the monthly Bessatsu Shonen Magazine. But I suppose even they couldn’t say no to a bit of standoffish advice from Levi.