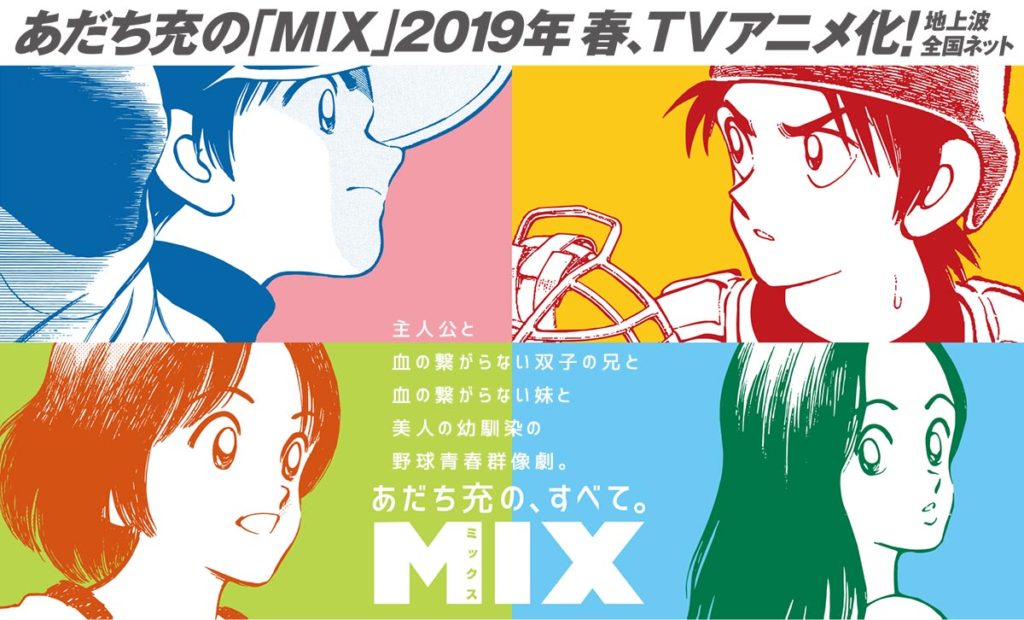 Announced a while ago, we’ve finally got a PV for April’s upcoming baseball anime Mix. Based off the currently running manga from the deity of baseball comics Mitsuru Adachi, Mix serves as both an original story and as a sequel to Touch; the 80s baseball anime phenomenon that enchanted hardcore otaku and casual watchers alike in Japan. On April 6 Mix will premiere in Japan and while none of the western streaming sites have announced it yet, we’re sure it’s a matter of time. Animated by OLM, mostly known for their work on Pokemon, and directed by Odahiro Watanabe who recently finished directing the Tokyo Ghoul:re anime, watch the trailer below to see what they’ve come up with.

The release of Mix could be pretty significant. It’s another chance for the Mitsuru Adachi sports anime & manga empire to penetrate outside of Japan. Unfortunately, despite being one of the most well known Manga artists often mentioned in the same breath as Ranma ½ and Inuyasha’s Rumiko Takahashi as they’ve both been writing for Weekly Shonen Sunday for decades, Adachi’s work never quite caught on with the majority of western audiences.

Despite being quite good, Viz’s release of Cross Game didn’t fly off the shelves when released stateside in 2010. (please read it, you’ll cry in a good way) However, the landscape’s pretty different from the last time there was a push for Adachi in the west. People just weren’t into sports shows at the time. Now, there have been quite a few sports anime recently to achieve popularity, like Haikyuu and Yowamushi Pedal. Maybe we’re ready to give sports anime the chance.

Again, in the 80s Touch was truly big. Something older non-anime fans in Japan are still familiar with. It’s theme song a Karaoke staple everybody knows. If Mix ends up half as good, it’ll be worth watching. It premieres April 6. More details available at Mix’s site.